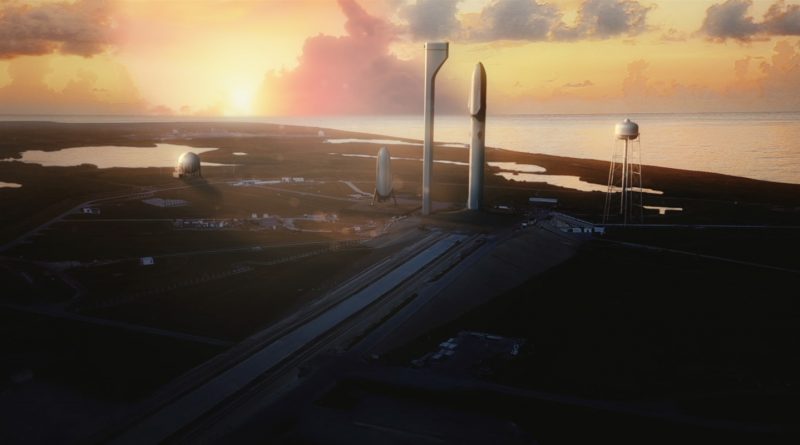 Ferrying crews to and from Mars in the next decade to lay the foundation for a self-sustaining civilization off Planet Earth – this ambitious goal was outlined by SpaceX CEO and visionary Elon Musk on Tuesday, fleshing out the technical details of a future interplanetary transportation system while calling for participation and financial support in a $10 billion undertaking.

Towering 122 meters above a sea-side launch pad, SpaceX’s future Interplanetary Transport System is envisioned to rumble away from Florida’s Space Coast with the highest thrust ever achieved in rocketry, even making the mighty Saturn V seem tiny.

SpaceX CEO and Chief Designer Elon Musk revealed concrete plans on Tuesday when speaking at the International Astronomical Congress in Mexico, lifting the veil on SpaceX’s planned architecture to fly large groups of humans to and from Mars and keep up a steady chain of supply runs, enabling humankind to become a Multi-Planetary Species.


Musk, who founded SpaceX in 2002, pursued the goal of getting humans to Mars from the very start, beginning a long process to establish the tools to arrive at a point where announcing a mission architecture such as this will not seem like pure science fiction.

“What I want to try to achieve is to make Mars seem possible,” Musk said when opening his talk. “Make it seem as though it’s something we can do in our lifetimes.” As motivations for establishing a human presence on Mars, Musk lists potential extinction events on Earth, and a drive to go beyond what’s already been explored.

SpaceX engineers worked long shifts, seven days a week to back Musk’s presentation up with actual development hardware, successfully assembling a large-sized fuel tank and hot-firing the company’s Raptor engine just in the nick-of time to show off progress on the hardware front in addition to shiny computer simulations.

The ultimate goal, so Elon Musk, will be making a trip to Mars affordable and reasonably safe, coming at a ticket price of around $140,000. But the first flights will be dangerous business, setting out to demonstrate maneuvers so far only seen on the silver screen, starting with large-scale refueling in space, interplanetary travel, a daring landing on Mars and a return trip using fuel produced from the Red Planet’s soil and atmosphere.

SpaceX’s mission architecture consists of three principal components – a 77.5-meter tall Booster capable of 1,000 flights, a Spaceship carrying 100+ passengers, and a reusable Tanker that hauls 380 metric tons of propellants into orbit for transfer to the Spaceship before it departs for Mars.

Musk has not yet come up with polished names for either the launch vehicle or spacecraft, but the first mission may fly under the name ‘Heart of Gold.’

Lifting off from Florida with a thrust of 13,000 metric-ton-force provided by a record-setting cluster of 42 Raptor engines, the Booster would accelerate the Spaceship to a velocity of seven times the speed of sound.

The Spaceship then doubles as a second stage, firing up to nine Raptor engines to enter a Low Earth Orbit.

The booster would then return to Earth – not unlike Falcon 9 first stages have done since December 2015 but taking it one step further in aiming the rocket straight back to its launch pad to make a pin-point landing on its launch mount. This would enable a rapid attachment of the Tanker module for launch within hours or a few days to meet up with the Spaceship in orbit to transfer nearly 400 metric tons of Liquid Oxygen and Liquid Methane needed for the trip to Mars and the adventurous landing maneuver.

Touching down on Mars under the power of its engines, the Spaceship and its crew are set for a stay close to two years to wait for Earth and Mars to line up again, providing just enough time to pull Carbon Dioxide from the Martian atmosphere and thaw up water ice from the sub-surface to generate the fuel needed for the return trip to planet Earth.

SpaceX released a detailed animation of the envisioned Mars architecture which – according to Elon Musk – is closely based on the actual engineering computer models of the flight vehicles and resembles what the actual mission profile would look like.

The initial trips to Mars would take on average 115 days of flight time, but Musk hopes that could be cut to roughly a month in the more distant future.

The Interplanetary Transport System would be the largest launch vehicle the world has ever seen, standing 11 meters taller than the Saturn V and outperforming it by a factor of 3.6 in terms of launch thrust and 4.1 for the maximum payload mass delivered to orbit.

But very much unlike the Saturn V that used five powerful engines on its first stage, SpaceX is betting on 42 Raptor engines to operate in unison to get the vehicle into orbit – a design very much resembling the Soviet N1 moon rocket that clustered 30 engines and failed miserably during all of its test flights in the 1960s & 70s. SpaceX says the engine clustering is an advantage when combined with modern computers and control systems, giving the vehicle multi-engine out capability to guarantee its valuable payload reaches orbit.

As has become standard for a SpaceX presentation, a very ambitious timeline was outlined on Tuesday, calling for orbital testing of the Interplanetary Transport System to commence in 2020 with a first cargo launch to Mars possible in late 2022.

Successfully meeting this timeline is strongly dependent on funding and resources. At present, SpaceX is dedicating only about 5% of the company’s resources to the project, corresponding to tens of millions of dollars.

The acceleration of the project is contingent on SpaceX finishing the development of the final iteration of the Falcon 9 rocket and inaugurating the Falcon Heavy, both planned for 2017. This would free up the majority of the SpaceX engineering team to work on the Mars Architecture while operational missions of the Falcon rockets deliver a boost in funding to a few hundred million.

However, Musk stressed that the overall effort of putting the Interplanetary Transport System into regular service would require $10 billion. Musk said he would contribute funding to the project and called up to the private sector as well as the government to create a huge private-public partnership in this endeavor.

While Musk touched intricate points of the architecture needed to get humans to Mars, he also outlined what would be needed to achieve a self-sustaining civilization on the Red Planet. To be truly self-sustaining, the colony itself would have to consist of at least one million residents, necessitating a large transport infrastructure and likely taking decades to establish.

A backdrop to Musk’s presentation was a depiction of Mars that – over the course of his address – slowly morphed into a more Earth-like appearance, hinting at even bigger plans to make Mars a second home to mankind via Terraforming efforts.

Closing his remarks, Musk showed that the Interplanetary Transport System could open up a whole range of targets for human and robotic exploration of the Solar System by autonomously landing on virtually any solid body.

Whether the impressive illustrations of SpaceX’s Spaceship flying to Mars, reaching out to Jupiter’s moons and exploring the darkest regions of the Solar System can become a reality remains to be seen as many projects – all of which less ambitious – ended up stalling due to a lack of funding.

SpaceX certainly has the confidence and passion to turn slides into reality and their commitment was proven with the first development hardware already in production, but securing the necessary funds to pull this mission off may prove to be the hardest challenge in getting humans to Mars on a reasonable timeline.