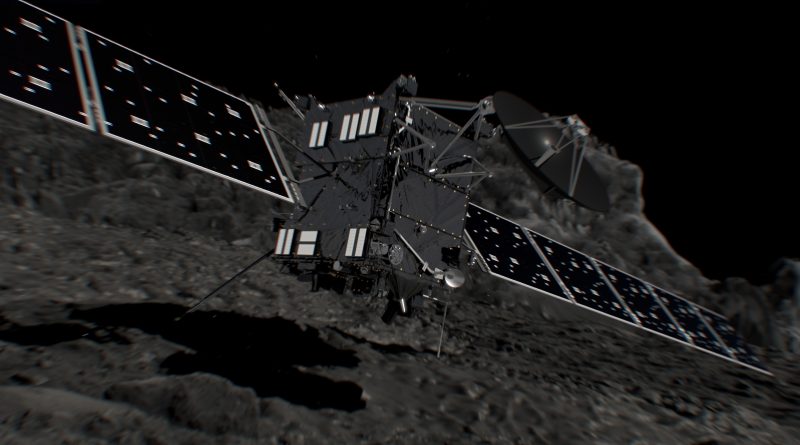 More than 700 million Kilometers from Earth, in the dark regions of our Solar System, ESA’s Rosetta spacecraft placed itself on a collision course with comet 67P to put the exclamation mark behind a remarkable mission of discovery, beginning to unlock the secrets from a distant past.

Rosetta’s twelve-and-a-half-year odyssey comes to an end on Friday, when, at around 11:20 UTC, when the orbiter will make a gentle touchdown on the surface of Comet Churyumov-Gerasimenko which it explored for the past two years to help understand the conditions under which the solar system was formed and how the ingredients of life may have been delivered to Earth.

The slow dive to the cometary surface will not mark the end of the Rosetta mission as scientists shift from operating the spacecraft and its instruments to focusing all their energy on the data collected by the spacecraft over the course of its close encounters with 67P.


Rosetta was the first mission to achieve orbit around a comet – objects targeted for in-depth examination since they preserve a record of an early stage of the Solar System and may hold clues on the formation of life on Earth whose ingredients were most likely carried by comets that impacted the planet. It was ESA’s second visit to a comet after the highly successful Giotto flyby mission to Halley’s Comet in 1986.

Launched in March 2004 atop an Ariane 5 rocket, Rosetta quickly traded the comfortable environment near Earth for the cold and dark reaches of the Solar System, traveling 6.4 billion Kilometers over the course of a ten-year journey to the mission’s target comet.

Rosetta returned to Earth one year after launch to boost its velocity by making a low-altitude flyby that served as slingshot for another gravity assist maneuver which used Mars in February 2007 and set the stage for a second and final Earth flyby in November – enabling the small spacecraft to head into the far regions of the solar system.

On its outbound leg, Rosetta passed by asteroids Steins in 2008 and Lutetia in 2010 before heading into a two-and-a-half-year hibernation to reduce onboard activities to a minimum in order to ensure the craft’s survival in a region near the orbit of Jupiter where solar power generation becomes ineffective. Waking up in early 2014, Rosetta began is preparations to catch up with its target in August, successfully accomplishing a deep space ballet with 67P before being captured in orbit within the comet’s weak gravitational field.

Putting to use a suite of instruments, Rosetta began a global mapping campaign of the strange-looking two-lobe comet. Based on data collected during the mission’s approach, teams were able to decide on a landing site for the 100-Kilogram Philae lander to get a up-close-and-personal look at a cometary surface.

Setting in motion the preparations for the first comet landing in history, Rosetta set itself on a collision course with 67P in November 2014 to send Philae on its way before firing its thrusters to clear the comet at safe distance.

Jubilation broke out at ESA’s Mission Control Center when signals arrived that Philae had touched down on the comet, but the celebration quickly turned into deep concern when signals from the lander faded after indicating its anchoring harpoons had not fired to secure Philae on the surface.

As it turned out, Philae bounced twice for a total of two hours before coming to rest in a shadowed place where its lifetime was limited to the energy stored in its primary batteries – giving scientists less than three days to capture the data they so long sought. Working around the challenges of the unstable landing site, scientists operated Philae to the last drop of battery power, watching the small lander run out of power after 56 hours, with its last breath sending down data from an attempt to drill into the comet.

Philae checked in with Rosetta flying overhead in June and July 2015 when it was briefly illuminated by the sun, but no meaningful science could be completed due to the low power levels. Despite the brief radio contacts, the location of Philae on the comet remained a mystery due to the bouncy landing that carried the three-legged lander to an unknown direction.

It wasn’t until earlier this month that high-resolution imagery from Rosetta revealed Philae’s location in a dark crack standing only on two legs. Obtaining a precise location for Philae was of great importance to scientists in order to put the data it returned with its spectrometers, surface probes and particle analyzers into context.

Rosetta’s mission comes to an end on Friday because comet 67P – after passing its closest distance to the sun in August 2015 – is once again headed into the distant reaches of the Solar System where the spacecraft can not generate enough electrical power to continue operations.

But the mission is ready to go out with a bang – a controlled descent to the cometary surface and a gentle touchdown, allowing Rosetta to capture ultra close-up data exercising the majority of its instruments – including the OSIRIS high-resolution imager that will be able to discern surface features smaller than one centimeter in size.

Because the mission’s end presents a valuable scientific opportunity and could greatly enhance Rosetta’s legacy, careful planning went into setting up Friday’s deep dive. Scientists selected a 130-meter wide pit called Deir el-Medina to be Rosetta’s final science target, aiming for touchdown near the pit to be able to look at what has become known as ‘goose bumps’ – one-meter sized lumps that are believed to represent the building blocks of the comet.

Deir el-Medina was chosen as the name for the impact region after a similar structure in an ancient Egyptian town of the same name. Artifacts found inside the Egyptian pit enabled scientists to look at life in that ancient town and it is hoped that the comet’s pit contains similarly important clues on the geological evolution of the region.

Rosetta began the setup for Friday’s descent in early August to enter the proper orbit for its final set of observations followed by the last trajectory corrections. Because the end of the mission was approaching, mission controllers were willing to accept greater risks, flying the spacecraft to within one Kilometer of the surface in an elliptical orbit.

The spacecraft fired up its thrusters on September 24 after a final close flyover followed by multiple fine-tuning maneuvers setting up for the “Collision Maneuver” – a final burn setting Rosetta on a slow-paced impact course, inbound from an altitude of 19 Kilometers. The completion of the 208-second long burn was confirmed at 20:51:39 UTC on Thursday, changing Rosetta’s speed of 34.6 centimeters per second and giving the mission’s navigators one last, but very important task – calculating the exact impact time and location based on data from the orbiter’s attitude sensors and navigation camera photos gathered in the hours after the burn.

The precise coordinates of the collision site will be needed to optimize the spacecraft’s pointing profile to make sure the desired targets show up within the field of view of all the instruments. Rosetta receives its last set of instructions from Earth at 8 UTC on Friday containing the pointing parameters for the final leg of its eight-billion Kilometer journey.

Touchdown is expected at 10:40 UTC on the comet +/-20 minutes, though timing will be narrowed to two minutes early on Friday. Signals from Rosetta will travel 40 minutes before reaching Earth, meaning the spacecraft will already be in its final resting place when the signals arrive at Earth.

The final descent to the surface will be very busy for the spacecraft – many instruments will be active to collect data such as gas, dust and plasma composition close to the comet as well as spectrographic data and high-resolution photos.

Rosetta will sense contact with the comet and immediately command its attitude control system to stop and also deactivate its instruments. Communications will cease once the High-Gain Antenna no-longer points to Earth as a result of the spacecraft tipping over.

The data return for Friday’s descent is limited by bandwidth – only 195 MB of data are expected to make it to Earth between the Collision Maneuver and impact. Most of the instruments will capture their last data between 20 and five meters in altitude as Rosetta approaches the dark surface at a speed of 0.9 meters per second.

The end of Rosetta’s mission will essentially be a reverse of the January 2014 wake-up from hibernation where all eyes were on the screen showing the radio frequency spectrum in which a pronounced peak rose when signals from Rosetta arrived. On Friday, the disappearance of that peak will mark the end of the Rosetta mission, no more data will be retrieved after this time.

Recently released by the project was an impressive look at the most active stage of the comet when it was close to the sun in August 2015 and sent bursts of gas and dust out into space, 34 of which were captured by Rosetta. Scientists presented data showing the violent bursts were closely tied to solar illumination of certain areas on the ground and, like clockwork, occurred on every rotation of 67P.

Calculations show each of the outbursts released between 60 to 260 metric tons of material in a period of under 30 minutes. Two categories of outbursts were found to be occurring – one early in the morning where the rapid & extreme change in temperature caused a sudden fracturing of surface features and an explosive release of volatiles. The other mechanism, triggering outbursts in the afternoon, calls for prolonged exposure to sunlight to heat up deeper pockets of volatiles, again leading to fracturing.