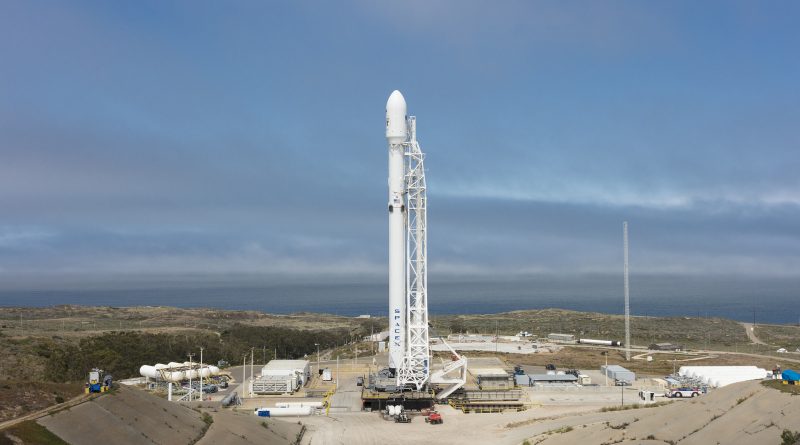 SpaceX on Sunday conducted the Static Fire Test of the final Falcon 9 rocket set for liftoff in 2017, targeting launch from California’s Vandenberg Air Force Base on December 23 (UTC) to lift the next ten satellites for the Iridium-NEXT system into orbit to cross the halfway mark for the constellation upgrade.

The Iridium-4 mission is SpaceX’s 18th and final planned Falcon 9 launch of the year, shattering the company’s previous record of eight launches in a calendar year. With 17 launches already performed, Falcon 9 is currently the most-flown orbital launch system this year – outperforming the Russian Soyuz workhorse that held the rank for most years in recent memory but only flew 15 times in 2017. Depending on China’s launch activity over the next two weeks, Falcon has a good chance of maintaining its position as the most-flown orbital launch family this year since the Long March series currently stands at 14 launches.


SpaceX’s year-closing mission will be the company’s fourth in support of Iridium-NEXT, building on three successful ten-satellite deliveries performed in January, June and October. The rapid-fire launches of Iridium-NEXT satellites are part of the most extensive satellite constellation upgrade ever performed – replacing the entire heritage Iridium constellation deployed in the late 90s and early 2000s with much-improved Iridium-NEXT satellites in a period of under two years.

SpaceX is on contract to deliver a total of 75 Iridium-NEXT satellites into orbit via seven Falcon 9 launches with ten satellites and one shared ride in March with five Iridium satellites and two GRACE-FO gravity-sensing satellites flown under a partnership of the German Space Center and NASA. Lifting satellites 31-40, the upcoming mission will cross the halfway point for Iridium’s constellation replacement with all 75 satellites set to reach orbit by the end of August 2018.


Carefully spaced in their orbital planes, the Iridium satellites communicate with user terminals on the ground and route communications packages to their destinations through satellite-to-satellite links between members of each plane and satellites in neighboring planes as well as an extensive ground network. Given its Low Earth Orbit and high inclination, Iridium is the only constellation currently in operation that can offer truly global coverage.

The Iridium replacement comes with a price tag of nearly $3 billion, covering the production of the satellites, Falcon 9 launch services and ground system upgrades needed to support the new satellites. Built by Thales Alenia and integrated by Orbital ATK, each Iridium-NEXT satellite weighs 860 Kilograms and covers a 4,700-Kilometer wide footprint – connecting to user terminals through a large L-Band antenna. Typical services offered by Iridium-NEXT are voice and data communications with mobile terminals at up to 1.5Mbit/s while a high-speed Ka-Band service is available for larger fixed and transportable terminals at data rates up to 8Mbit/s.

A steady launch cadence, a failure-free year and beginning initial re-flight missions were the major goals at SpaceX for 2017 as the company begins to recuperate funds spent on development of its re-usable rocket technology. All three goals were achieved as Falcon 9 took the leading position in the world of space launchers and four of SpaceX’s 2017 missions performed to date have used previously flown first stages with Iridium-4 set to become the fifth.

Originally, Iridium’s contract with SpaceX specified only new boosters to be used for Iridium-NEXT missions, much the same as NASA’s Commercial Resupply Services contract for Dragon missions to the International Space Station. Given SpaceX’s success in recovering first stage boosters and demonstrating safe re-flights on multiple occasions in 2017, both NASA and Iridium changed their positions through extensive reviews of data from returned boosters that convinced them that flying on a previously used booster adds no to minimal risk to overall mission success.

For Iridium, the financial discount provided for flying on a used first stage – which is minimal – was not the deciding factor for placing two missions on flight-proven boosters. The advantage of opting for flown boosters was in the schedule assurance gained through the use of already existing hardware since first stage production had been the major bottleneck for SpaceX in bringing up its launch rate.

Tasked with the Iridium-4 mission is Falcon 9 first stage B1036 that made its first flight to the edge of space on June 25 with Iridium-NEXT satellites 11-20, returning via a successful landing on SpaceX’s drone ship ” Just Read The Instructions”. The Block 3 booster debuted SpaceX’s next-generation grid fins on the June 2017 missions, set to become a standard feature of the F9 Block 5 set for its debut in early 2018.


After its successful return to land via the Port of Los Angeles, Booster 1036 will have gone through detailed post-flight inspections focused on the vehicle’s engines as well as the airframe as welds and structural connections are put through extensive tests using different methods including ultrasound. Once given a clean bill of health, the booster was ready for its return to Vandenberg where it was paired up with a brand new second stage.

Sunday’s Static Fire Test, performed without any media attention before the fact, was expected to fire the flight-proven core stage for seven seconds to collect performance data from the nine previously flown Merlin 1D engines. SpaceX confirmed the Static Test via Twitter, indicating the firing met its planned duration and all required data was obtained, feeding into more thorough reviews over the coming days leading up toward the Launch Readiness Review.

Returning to the pad-side hangar, Falcon 9 will receive its payload over the coming days. The ten Iridium-NEXT satellites were delivered to Vandenberg from Orbital ATK’s Gilbert, Arizona facility in pairs through the end of November to enter final checkouts, propellant loading and integration around their two-tier launch adapter.

Aiming for Plane 2 of the six-plane constellation, Iridium-4 is targeting liftoff at precisely 1:27:23 UTC on December 23, 5:27:23 p.m. local time on December 22. Launch is planned just 61 seconds after the launch window opens for a Japanese H-IIA rocket lifting off from Tanegashima Island with the GCOM-C climate-monitoring satellite.

Heading into 2018, SpaceX will aim to further step up its launch pace with around 30 missions on the manifest. With the debut of Falcon Heavy, Falcon 9 Block 5 and the crewed Dragon spacecraft, the new year will hold plenty more milestones to be unlocked by SpaceX and thrill an ever-growing fan base.