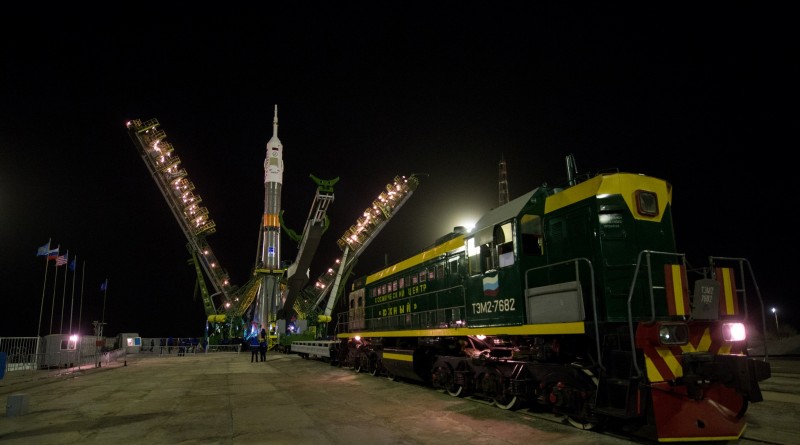 Strong winds complicated the rollout of the Soyuz FG rocket to its Baikonur Launch Pad on Wednesday, requiring the booster to remain in a horizontal position until the evening hours when winds had calmed down. Despite the delay, launch remains targeted for Friday at 21:26 UTC to send the next crew to the International Space Station.

The Soyuz FG rocket had been assembled on Tuesday and the Russian State Commission provided clearance for the vehicle’s rollout after a technical review. The 50-meter long rocket emerged from the MIK assembly facility at the traditional early morning hour, dating back to the rollout of Yuri Gagarin’s Vostok 55 years ago, an anniversary that is commemorated with an emblem on the payload fairing of the Soyuz TMA-20M spacecraft.


Wheeled to the launch pad at Site 1/5 under thick clouds, the Soyuz was positioned to be raised to its vertical launch position, but teams had to hold at that point as winds were over the safety limit with gusts up to 100 Kilometers per hour.

Wednesday’s rollout was attended by the backup crew of Soyuz TMA-20M – Sergei Ryzhikov, Andrei Borisenko and Shane Kimbrough. The prime crew of commander Alexey Ovchinin, and Flight Engineers Oleg Skripochka and Jeff Williams were not allowed to see the rollout since it is considered to bring bad luck.

Soyuz FG remained in a horizontal position throughout the day as winds persisted. The Russian State Commission conducted a review of conditions in the afternoon, local time, and decided to push the erection of the launcher until the evening hours. Soyuz was finally raised to its vertical position after sunset and the two halves of the Service Structure were placed around the vehicle, allowing engineers to connect propellant, power and data umbilicals to mark the start of two days of launch preparations.

According to Roscosmos, the launch will remain scheduled for Friday night and updated processing schedules were distributed in the evening hours on Wednesday. As part of its on-pad campaign, the Soyuz undergoes detailed testing and engineers prepare the vehicle for tanking to set up for the initiation of the countdown on Friday, eight hours prior to liftoff.

Lifting off from the historic Site 1/5 launch pad, the Soyuz will start heading north-east, beginning its chase of the International Space Station that will fly over the launch pad just minutes ahead of liftoff. The crew will reach orbit after a nine-minute ascent, arriving in a 200-Kilometer orbit around Earth for an express rendezvous with ISS, requiring the Soyuz to make four engine burns during its first two laps around the planet followed by the initiation of the fully automated rendezvous.

Soyuz TMA-20M is expected to dock to the Poisk Module of ISS at 3:12 UTC on Saturday to restore the Station’s crew strength at six, set for a busy two-and-a-half-month increment as part of Expedition 47.