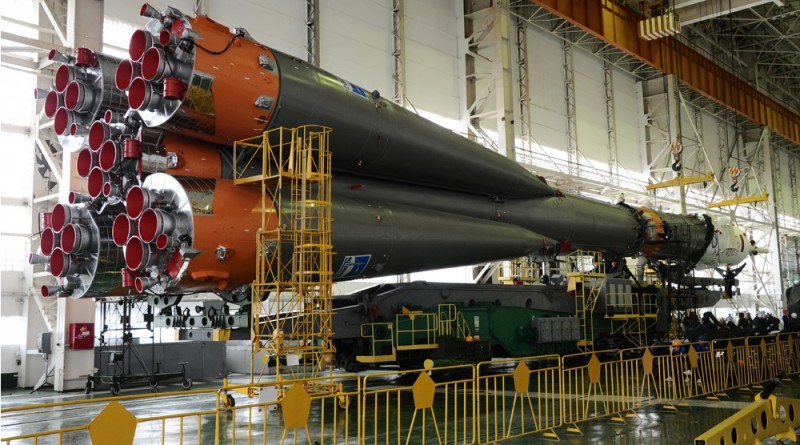 The Soyuz rocket for the launch of the next ISS crew has been assembled at the Baikonur Cosmodrome on Monday and Tuesday to kick off the final days of preparations to set the stage for a Friday night liftoff.

Over the course of the last week, preparations for launch were in full swing at two different facilities – Site 254 where the Soyuz TMA-20M spacecraft finished processing and the MIK-112 Launcher Integration Facility where the Soyuz FG rocket was prepared.

Fully fueled, the Soyuz spacecraft returned to its processing facility last Wednesday and was attached to its payload adapter.


With the Soyuz placed in its test stand, engineers completed a final technical inspection and removed the last protective covers before the spacecraft was rolled to a horizontal position. The docking mechanism cover was removed and the launch shroud was carefully put in place around the vehicle. Once encapsulated, the Soyuz was raised to a vertical position again for the last visit by the three crew members who climbed through a hatch in the shroud to ingress their spacecraft for an inspection and to familiarize themselves with the cargo situation on board.

Soyuz TMA-20M was packed up on Monday and shipped to the MIK-112 facility to undergo integration with the Soyuz FG rocket. In the past weeks, the four 19.6-meter long boosters had been attached to the 27.8-meter long core stage, leaving only the third stage and Soyuz to be installed. Overall, Soyuz FG is 49.5 meters tall weighing 305,000 Kilograms at liftoff, capable of carrying more than seven metric tons into a Low Earth Orbit.

With the spacecraft arriving at the facility, teams installed the payload adapter on the third Stage of the Soyuz, also putting electrical and data connections in place. The next step was the installation of the Launch Escape Tower to structural interfaces at the top of the launch shroud and the system was connected to circuitry to be able to ignite its solid-fueled rockets in the event of a problem to safely pull the Soyuz away from the launcher.

Engineers then removed the protective plastic covers from the engine bells of the four-chamber RD-0110 main engine of the third stage before the stage was mated with the interstage truss section of the Core Stage of the Soyuz. As part of the integration, pyrotechnics were installed on the vehicle for all major separation events.

With Soyuz fully assembled and initial checkouts of the rocket providing good results, the Russian State Commission performed a clean review of the status of the launch vehicle and all launch preparations that had been ongoing at the pad and all other support facilities. With no show-stoppers identified, the State Commission cleared the rocket for its rollout in the early hours on Wednesday.

Soyuz TMA-20M is proceeding on schedule for liftoff on Friday at 21:26 UTC from Site 1/5 at the Baikonur Cosmodrome. The Soyuz FG rocket will give the spacecraft and its three crew members a nine-minute ride into a 200-Kilometer orbit from where the spacecraft will make its climb to link up with ISS. Using the four-orbit rendezvous profile, Soyuz is set for docking to the Poisk module at 3:12 UTC on Saturday to top up the Station crew at six for a busy two-and-a-half-month increment as part of Expedition 47.