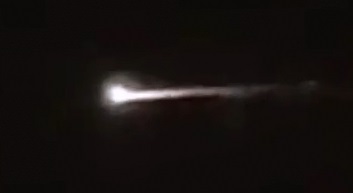 
The Soyuz FG rocket lifted off from Kazakhstan’s Baikonur Cosmodrome at 17:44 UTC on Wednesday, March 21st, carrying into orbit the Soyuz MS-08 spacecraft headed to the International Space Station with veteran Cosmonaut Oleg Artemyev and NASA Flight Engineers Drew Feustel and Ricky Arnold. Blasting off from the remote launch site, Soyuz dropped its four boosters two minutes after taking flight and shed its large central core before hitting the five-minute mark, handing off to the Block I third stage for the final push into orbit. Soyuz MS-08 separated from the Block I eight minutes and 48 seconds after liftoff, later climbing up toward the Space Station while the spent third stage remained in the relatively low injection orbit.


Interacting with particles in the lower thermosphere, the Block I stage began losing altitude at a swift rate and drag acting on the mostly hollow rocket body continued rising as it headed toward the mesosphere ahead of its final dive into the upper stratosphere where most of the rocket’s structure was expected to be incinerated without reaching the ground.


The re-entry time referenced by JSpOC corresponds to Block I passing 80 Kilometers in altitude where the object is immersed in plasma and typically begins breaking apart as the result of drag building up to a destructive force. With a two-minute window of uncertainty, this could have occurred anywhere from Montpellier to a point 150 Kilometers north of the Island of Sicily.