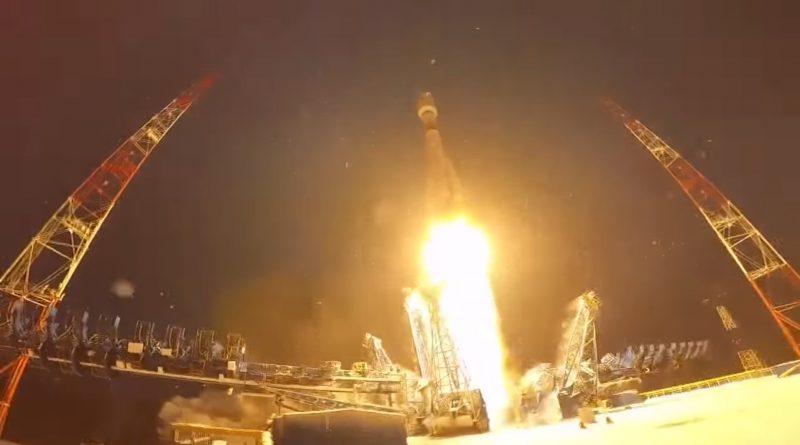 Coming on the heels of a failed launch from the Vostochny Cosmodrome earlier in the week, Russia successfully launched a Soyuz 2-1B rocket from the country’s prime military launch site at Plesetsk, placing the Lotos-S1 No. 803 electronic intelligence-gathering satellite into orbit on Saturday. Joining the Liana Constellation, the satellite will collect radio emission signatures from foreign ground sites for analysis by the Russian Ministry of Defence.

Saturday’s successful launch came just four days after a Soyuz 2-1B / Fregat-M launch vehicle failed to reach orbit with the Meteor-M 2-1 weather satellite and 18 international secondary payloads. Within hours of the failed launch, engineers began zeroing-in on an apparent fault with the Fregat upper stage involved in the mission as Soyuz had delivered a spot-on performance in lifting the Fregat-M to its sub-orbital drop-off point from where it was up to the upper stage to maneuver the 2,750-Kilogram primary payload into orbit followed by multiple engine burns to dispatch the Micro- and CubeSats riding as secondary payloads.


A fairly bizarre failure scenario has since been uncovered, pointing to a previously undetected software bug within the Fregat upper stage that arose from the specific orientation of the Vostochny launch pad relative to the desired flight direction that was unlike any other Soyuz launch pad in Baikonur, Plesetsk or French Guiana. As a result of Fregat losing knowledge of its orientation in space, it pointed its main engine to the wrong direction and failed to reach a stable orbit, burning up over the North Atlantic after barely half a lap around the planet.

Given the problem on the November 28 mission could be isolated to the Fregat upper stage, Soyuz 2-1B was fully exonerated which allowed the Lotos-S1 launch to proceed after final reviews cleared Soyuz on December 1st. At that point, the 46-meter tall rocket with the ~7-metric-ton Lotos-S1 satellite under its fairing was already standing tall atop the Site 43/4 launch pad at Russia’s prime military launch base.


Lotos-S1 No. 803 is the third in a series of low-orbiting electronic intelligence satellites Russia operates under the Liana program, a successor to the Tselina heritage satellites launched between 1967 and 2007. Electronic Intelligence (ELINT) has become a cornerstone of modern-day space-based intelligence gathering, ranging from the characterization of radio emitters on foreign ground sites to the interception of entire satellite uplinks.

The Tselina program operated two types of satellites – Tselina-O, tasked with low-sensitivity measurements of radio emitters over a broad area to identify targets of interest and the Tselina-D spacecraft with high-sensitivity sensors to provide signal characterization and intercepts. Additionally, Russia launched US-P and US-PM Ocean Monitoring Satellites from 1974 through 2006 to track the movement of naval vessels and characterize their emissions. A third generation of Tselina satellites entered development in the 1980s but the project ended with the fall of the Iron Curtain.

KB Arsenal in St. Petersburg was tasked with the development of the Liana instrumentation that includes two spacecraft types: Lotos for collection of ELINT from land-based targets and Pion as a specialized spacecraft for naval signals intelligence and radar reconnaissance with the added potential that each component can provide backup functions for the other. As is typical for Russian space projects originating in the 1990s, Liana ran into considerable funding issues and had a long road to launch with final design studies getting underway in 2005.

After 15 years of development, the Lotos-S prototype satellite was launched in 2009, operating from a 900-Kilometer orbit, inclined 67 degrees. The first operational Lotos-S1 satellite, initially expected to fly within three years of the prototype, reached orbit in 2014 and Pion-NKS is still waiting for its inaugural launch that has been drifting on the Russian manifest for the better part of a year.

All Liana satellites employ a modernized version of the Yantar Bus of TsSKB Progress, giving the satellites a launch mass of up to seven metric tons. Yantar dates back to the early days of photoreconnaissance missions in the 1960s, offering film return capability via three re-entry vehicles. Since then, Yantar has been adapted for a number of missions including electro-optical reconnaissance satellites, the Bion and Foton science platforms, the Resurs environmental satellites and the latest generation of low-orbiting ELINT satellites.


Russia has also begun exploiting Geostationary Orbit for Electronic Intelligence where the United States had previously been the most active nation in terms of intelligence collection, operating a series of satellites with massive dishes to intercept wireless transmissions with sufficient sensitivity to listen in on communications within Wi-Fi networks from 36,000 Kilometers above while other specialized satellites are designed to vacuum up entire uplinks for foreign communications satellites.

The Russian Luch/Olymp satellite, launched in 2014, has shown similar behavior, cozying up to commercial communications satellites in Geostationary Orbit – close enough to suck up all the information sent up to the satellites from the ground. Since its launch, Luch has conducted a number of re-locations and shadowed different satellites, likely in an effort to evaluate signal interception capabilities.

The launch of Lotos-S No. 803 provides Russia with a continued ability to study radio emissions from foreign ground sites while Luch continues its clandestine operation in GEO.

Soyuz 2-1B carrying Lotos-S No. 803 lifted off from Plesetsk Site 43/4 at precisely 10:43:26.331 UTC on December 2nd, turning north-east to deliver the satellite into a 67-degree orbit that allows it to capture data from all areas of interest including the entire U.S. and Chinese mainland, as well as political hot spots like North Korea and the Middle East.

Soyuz 2-1B was flying in its three-stage configuration, without any upper stage, as the mission was targeting a direct insertion with final orbit circularization up to the Yantar-based satellite. Racing away from Plesetsk with 424 metric tons of thrust, Soyuz dropped its four boosters 118 seconds into the flight after each consumed nearly 40 metric tons of propellant to help accelerate the vehicle to 1.5 Kilometers per second. Separation of the payload fairing occurred just shy of four minutes into the mission when Soyuz had reached the tenuous upper atmosphere where aerodynamic forces were no longer a danger to the satellite and its antenna system.

The 27.8-meter long Core Stage departed the vehicle via the usual hot-staging process at T+4 minutes and 47 seconds as the modified Block I third stage and its RD-0124 took over powered flight for a burn of four and a half minutes to push the stack into orbit with a thrust of 30 metric ton force. Separation of the satellite was expected to occur nine and half minutes after launch and the Russian Space Forces, overseeing military launches from Plesetsk, confirmed the Lotos satellite had been separated into the target orbit.

Designated Kosmos-2524 under the Russian military naming convention, Lotos-S No. 803 was detected in an orbit of 239 by 900 Kilometers, 67.14 degrees – in line with the previous two Lotos launches and following a well-established pattern with Yantar-based missions that leave the orbit circularization up to the spacecraft in the days and weeks after orbital injection.

Saturday’s launch was the 16th Russian orbital space launch of 2017, on course to match or even surpass 19 launches completed in 2016 with three launches currently firm on the Russian manifest – the crewed Soyuz MS-07 is next, targeting liftoff from Baikonur on the 17th, AngoSat is targeting liftoff atop a Zenit rocket on December 26 and a military Kosmos satellite is set for launch on the 27th using a Soyuz 2-1v rocket. The next Soyuz/Fregat launch from Vostochny, originally planned for December 22, could be delayed as a result of the trouble with Fregat since it would closely recreate the flight geometry of the ill-fated launch of November 28.