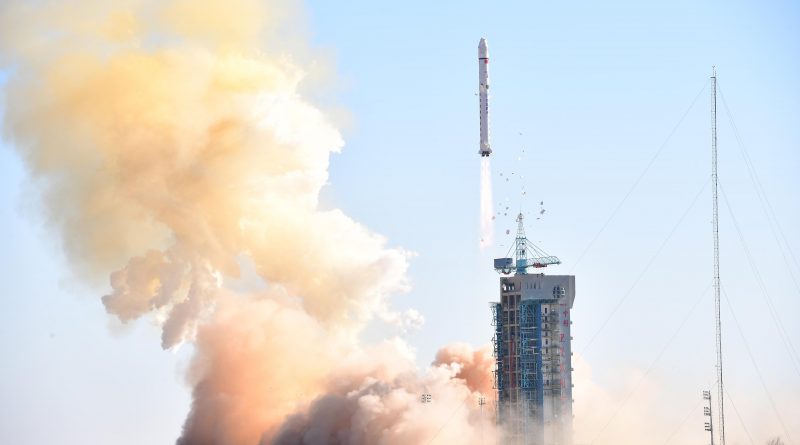 Not much has been revealed about the LKW-1 Satellite (Ludikancha Weixing 1) other than it being a very high-resolution Earth imaging satellite that will fly for the official purpose of “remote sensing exploration of land resources.” However, as often seen with China’s space efforts, military spacecraft are often flown under the cover of civilian Earth observation and environmental monitoring missions. To that end, LKW-1 appears to be tied to the Yaogan reconnaissance satellite fleet through similar orbital parameters as electro-optical imaging satellites flown as part of the constellation.


CGI animation and actual imagery of the satellite separating from its Long March 2D carrier rocket were broadcast on Chinese news channels, showing a hexagonal satellite body with three deployable solar panels – a design shared by a number of low-orbiting imaging satellites operated by a number of nations as well as private entities. (e.g. the recently-launched Mohammed VI-A)

Based on its appearance, the satellite is suitable for a telescope of similar size as the latest medium-sized imaging satellites designed by Airbus & Thales, hosting 65-centimeter telescopes and achieving ground resolutions of up to 0.7 meters for black-and-white imagery and better than three meters for multi-band color and near-infrared imagery. This would be in line with reports that LKW-1 is more advanced than the commercial Jilin video and imaging satellites, capable of a ground resolution of 1.13 meters for panchromatic imagery.


LKW-1, like the low-orbiting optical reconnaissance satellites of the Yaogan series, was built by the China Academy of Space Technology. U.S. Space Surveillance detected the LKW-1 satellite in an orbit of 484 by 499 Kilometers, inclined 97.46° and with a right ascension of 50° – placing it in a similar operational orbit as the Yaogan-21 satellite launched in 2014 (484 x 499, RAAN 48.5°) and Yaogan 26, also launched in 2014 and currently in an orbit of 481 x 491km with a right ascension of 56°. LKW-1, if belonging to Yaogan, would be the seventh satellite with an operational altitude of less than 500 Kilometers.

It remains to be seen whether additional LKW satellites will be launched in the near future, potentially establishing a new sub-constellation of Yaogan comprising follow-on satellites to the Jianbing-6 imaging craft that had been the latest known generation of optical reconnaissance birds flying under the Yaogan designation. Yaogan 21 and 26 launched on Long March 4B rockets while LKW-1 flew on a less-powerful CZ-2D, strongly hinting the satellite is using a more compact platform with a launch mass around one metric ton.