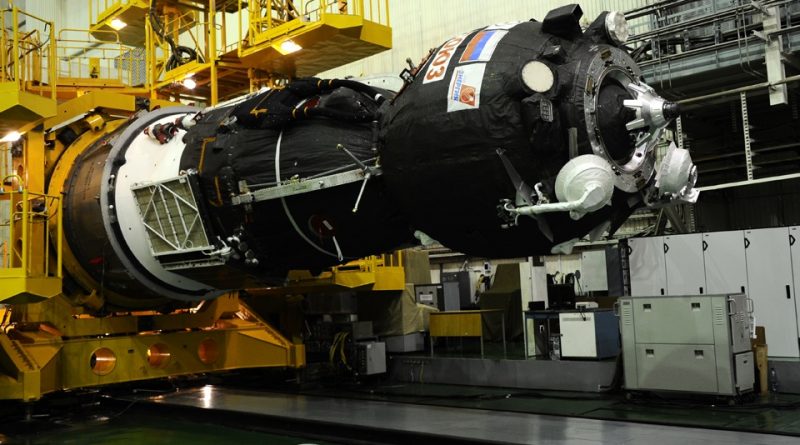 The first Soyuz MS spacecraft to carry a crew into orbit has completed its launch processing campaign and is ready for integration with its Soyuz FG rocket on a path to liftoff on July 7 to transport the ISS Expedition 48/49 crew to their destination in space.

The international crew trio – Commander Anatoli Ivanishin and Flight Engineers Takuya Onishi and Kate Rubins – finished their last training operations at the Baikonur Cosmodrome and are enjoying a few quiet days ahead of their planned liftoff at 1:36 UTC on Thursday, July 7.

Soyuz MS introduces a number of systems upgrades on the trusted Russian spacecraft, primarily focused on the vehicle’s navigation, control and communications system. The modified systems were tested in an operational environment aboard a pair of Progress cargo missions starting in December 2015 to fully check out all new components in space before committing to a crewed flight.


The MS modification replaces the old Kvant radio system of Soyuz with a Unified Command and Telemetry System and the new communications system enables Soyuz to use the Luch data relay satellites to keep in contact with mission control for the majority of its treks around the planet.

GPS/Glonass navigation is employed for onboard orbit determination and autonomous burn targeting and the rendezvous with ISS will be improved through the use of the new KURS-NA radio navigation system and a proximity communications link, allowing for the exchange of relative navigation data. Though KURS-NA will be a firm part of future Soyuz MS missions, the first flights will continue using the heritage system in a hot-backup configuration.

Other upgrades on the spacecraft include the more efficient solar cells, a modified thruster arrangement, a digital video transmission system and new angular rate sensors.

Soyuz MS is also outfitted with a black box recording flight parameters, crew voice and physiological parameters stored in a 4GB memory. The СЗИ-М system can tolerate high G loads, withstand a fire of 700°C for 30 minutes and is expected to be re-flown for ten missions.

To provide time for testing of the new systems in flight, Soyuz MS-01 will be taking the scenic route to ISS, sticking to a 34-orbit rendezvous, confining the three crew members to the small internal volume of Soyuz for a two-day commute to ISS.

Originally, Soyuz MS-01 was planned to launch on June 24 to minimize the gap after the June 18 Soyuz TMA-19M landing in order to reduce the period of three-crew operations. However, outstanding issues related to the vehicle’s rendezvous software required the launch to be pushed as simulations had shown an unexpected roll rate would occur on the spacecraft during its final approach to the Station’s Rassvet docking port.

A modification of the flight software has been implemented and fully re-tested in support of a July 7 launch date and the Soyuz crew flew to the Baikonur Cosmodrome on June 24 for the usual two-week launch campaign.

Anatoli Ivanishin, coming from a military background, will be making his second trip to the Space Station after spending 165 days in orbit as part of ISS Expedition 29/30 in 2011/12. This will be his first flight as a Soyuz commander, accompanied by JAXA’s Takuya Onishi and NASA’s Kate Rubins – both first-time fliers.

Onishi was selected by JAXA in 2009 after working as a commercial airline pilot and trained alongside NASA’s 20th Astronaut Group before receiving his flight assignment. Kate Rubins holds a Ph.D. in Cancer Biology and completed extensive studies in the field of virology before NASA selected her in 2009. She was assigned to the crew of Expedition 48/49 in 2014 to enter two-years of mission-specific training.

The backup crew for Soyuz MS-01 is comprised of space veterans Peggy Whitson and Oleg Novitskiy and rookie Thomas Pesquet – working toward a launch on Soyuz MS-03 set for November of this year.

The crew had a busy week at the Cosmodrome, starting with a fit check of their Sokol Launch and Entry Suits that will protect them in case of a pressure loss on the way up or down. They then had a chance to visit their Soyuz spacecraft and complete an unsuited ingress exercise to get familiar with the situation aboard. Wearing their suits, they exercised ingressing their spacecraft and completed a final simulation aboard the vehicle before Soyuz was shipped over to the fueling facility to receive propellant and compressed gases for its trip to ISS.

Soyuz MS-01 will be flying under the call sign ‘Irkut’, paying tribute to Ivanishin’s birthplace Irkutsk.

For the crew, activities continued with a review of cargo to be placed on their Soyuz, simulations of a manual docking to ISS and procedure reviews, including meetings with recovery forces that will be in place under their flight path in the unlikely event of a launch abort.

The Soyuz trio also had daily tilt table sessions on their schedule as well as regular rides on a rotating chair to prepare their bodies for the sensation of zero gravity.

The 7,200-Kilogram Soyuz MS spacecraft returned to the Spacecraft Processing Facility on June 27 for final inspections before being installed atop its Launch Vehicle Adapter. On Thursday, the spacecraft was rolled to a horizontal position to be installed inside its protective launch shroud after the removal of the last set of protective covers.

At the MIK launcher integration building, a partially integrated Soyuz FG rocket is waiting for the arrival of the spacecraft to finish the assembly process ahead of an early-morning trip to Site 1/5 two days after liftoff.

The crew visited the MIK on Saturday, getting a chance to look at their Soyuz rocket – the next time they’ll see it will be fully fueled on the launch pad as the prime crew does not attend the rollout of the rocket.

The crew also completed their final inspection of the Soyuz spacecraft on Saturday, climbing through a hatchway in the shroud to access their vehicle that has been loaded with cargo to be transported to ISS along with the three crew members.

Soyuz MS-01 remains on track for a 01:36:41 UTC liftoff on July 7, though the time may shift by a few seconds based on tracking of the International Space Station’s orbit. Docking is planned at 4:12 UTC on Saturday, July 9 to mark the start of two months of six-crew operations as part of Expedition 48.