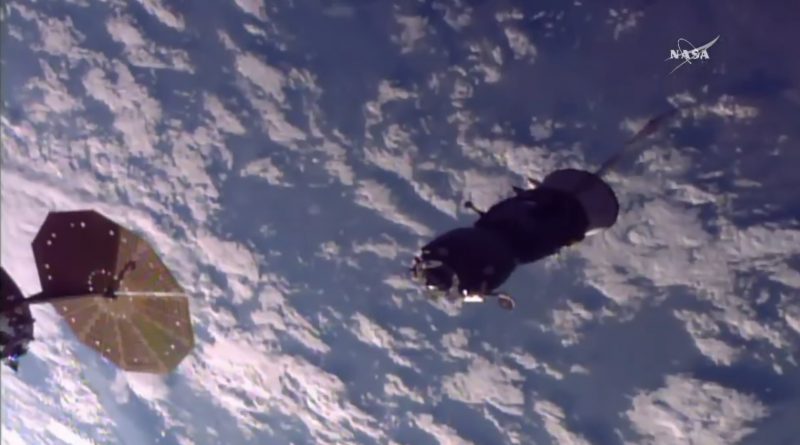 Two International Space Station crew members bound for home departed the orbiting laboratory on Friday to set sail on their return to Earth after over 196 days in orbit.

Veteran Cosmonaut Oleg Novitskiy and ESA’s Thomas Pesquet made an on-time undocking at 10:47 UTC aboard their Soyuz MS-03 spacecraft and are set to ride through a blaze of plasma and parachute to a pre-sunset landing in the steppe of Kazakhstan to close out their ISS adventure after circling the Earth 3,136 times.

Leaving its orbital docking port, Soyuz drifted away from the Space Station Friday morning and fired its engines twice to depart the vicinity of the Space Station for the rocket-powered braking maneuver at 13:17 UTC that will transition the Soyuz from an orbital path onto a sub-orbital arc to intercept the dense layers of the atmosphere half an hour later to begin the process of slowing down from 25 times the speed of sound to a full stop in a period of just 23 minutes.


Standing by in the sparsely populated landing area in South-Central Kazakhstan will be a fleet of helicopters and ground-based vehicles to welcome the Soyuz and its crew duo home on what is expected to be a clear summer evening. Descending under its single parachute, Soyuz will fire up braking rockets moments before touchdown, expected at 14:10 UTC to mark the end of an extremely busy mission as part of ISS Expedition 50/51.

Novitskiy and Pesquet can look back at an eventful mission to the International Space Station that began back on November 17 when they lifted off with their former crew mate Peggy Whitson on a two-day rendezvous with the Space Station. Over the course of their stay on ISS, the crew supported six spacewalks, five cargo resupply missions and over 250 experiments, making for busy days aboard the orbiting complex, though Thomas Pesquet still managed to find time to share his experience living & working in space with over a half a million Social Media followers.


Peggy Whitson switched Soyuz craft after the arrival of the Soyuz MS-04 vehicle that lifted off with an empty seat as Russia reduces its permanent ISS crew contingent to two – opening up a seat for Whitson to return with Fyodor Yurchikhin and Jack Fischer after extending her mission until September. The switch was officially marked in May when Whitson’s Kazbek seat liner moved into the MS-04 spacecraft that targets landing on September 3.

ISS is facing a lengthy period of three-crew operations over the summer as the next Soyuz is not scheduled to launch until July 28, suffering a lengthy delay because the Soyuz #734 spacecraft, originally intended to fly the MS-04 mission, had to be replaced with the next Soyuz in line, causing a knock-on effect on subsequent missions. The landing of Soyuz MS-03 was pushed back two weeks to keep ISS at a full crew for as long as possible.

Wrapping up their stay on the Space Station, the two crew members spent the last three weeks preparing for their speedy return trip – packing the Soyuz with disposal and return cargo, putting their spacecraft through a series of tests, practicing the landing sequence and verifying a good fit of their suits and seats.

An emotional Peggy Whitson handed command of ISS over to Fyodor Yurchikhin on Thursday in a short ceremony also acting as a farewell for Pesquet and Novitskiy who spent the last two years training with Whitson for their stint aboard ISS.

In progress in Kazakhstan throughout the day on Friday was the pre-stating of recovery forces with helicopters being flown from Karaganda, the central staging city, to Dzhezkazgan from where it is a one-hour flight to the landing area.


Off-road vehicles and All-Terrain Vehicles were deployed in the morning hours to be in place at the primary and ballistic site, 450 Kilometers short of the bullseye target. Fixed-wing aircraft were pre-staged in Karaganda & Baikonur to become airborne command centers and communications terminals during the recovery operation.

The Space Station crew got up earlier than usual on Friday to allow Novitskiy and Pesquet to work through their final preparatory steps, activating the Soyuz craft around 6 UTC for systems initialization and checkout. Soyuz MS-03 was transitioned to autonomous power at 7 UTC and communication checks between Mission Control Moscow and the crew verified a good comm link through Russian ground stations.

The five Expedition 51 crew members parted ways as Pesquet and Novitskiy bid farewell to their crew mates and their home in space for the last half year. Floating aboard the Soyuz, Novitskiy closed and locked the vehicle’s hatch at 7:31 UTC while Yurchikhin did the same on the Rassvet-side of the docking interface to allow the hour-leak check to commence.

While keeping an eye on leak check clocks and pressure gauges, the crew put on their Sokol Launch and Entry Suits and sealed themselves off inside the Entry Module with two-time Soyuz Commander Novitskiy boarding the center seat and Pesquet strapping himself into the left seat to assist with the landing operation. Leak checks were also performed on the Entry Module to verify the internal hatch was air tight before the two crew members went through the final preparatory steps for the undocking sequence.

Soyuz, only held in place by its own hooks after the Rassvet hooks were opened, powered up its docking mechanism and began driving open the hooks upon reception of the undocking command at 10:45:30 UTC.

Soyuz pushed off ISS with four loaded spring assemblies at 10:47:00 UTC over the border of Mongolia and China, marking its departure after over 194 days at the orbiting complex. The craft drifted away passively to open a gap of 20 meters before re-activating the thrusters for the first of two departure burns that lasted eight seconds and accelerated the Soyuz by 0.5 meters per second along the Station’s R-Bar – initially departing ISS along the radial vector.

Immediately after the initial separation maneuver, Soyuz transitioned into a swift roll maneuver to properly position the thrusters for the second departure burn coming 1.5 minutes after the first. This 1.5m/s burn lasted for 30 seconds and provided a thrust component along the velocity vector, placing the Soyuz on its usual V-bar departure path out of the ISS Approach Ellipsoid.

Leaving the Station’s neighborhood, Soyuz entered a free flight of one and a half orbits to open up a 12-Kilometer gap to ISS before firing up on the rocket-powered deorbit maneuver. The two crew members, after getting a fleeting look at their home in space for the last half year, will not have much to do for the free flight until starting deorbit preparations around one hour from the burn. These steps include the reconfiguration of the craft’s navigation system and connecting the Entry Module batteries to the power bus.

While passing over Russian Ground Stations one orbit prior to landing, Soyuz will re-orient to a tail-first attitude followed by the opening of a protective cover shielding the SKD main engine while it sat idle for the craft’s stay at ISS. Ignition of the 300-Kilogram-force S5.80 engine is planned at 13:17:09 UTC on a burn of four minutes and 36 seconds designed to slow the Soyuz down by 128 meters per second, just enough to transition the craft from an orbital trajectory to a sub-orbital arc intercepting the dense atmosphere.

While Soyuz hits the brakes 400 Kilometers above the South Atlantic, Oleg Novitskiy will keep close watch over all onboard systems and report a running tally of the achieved change in velocity and other relevant engine parameters.

With no more turning back, the crew will close their helmets and the Orbital Module will vent down to the vacuum of space to set up for the pyrotechnic separation of the three sections of the Soyuz of which only the 2.17 by 2.24-meter Entry Module can survive the extreme re-entry environment. Beginning its dip toward the atmosphere, Soyuz will approach Kazakhstan from the south-west, passing over the African continent one last time.

Communications with the crew, provided through a VHF radio link with the Space Station, are expected to deteriorate as the gap between the two craft opens up and lengthy communication outages are relatively common from the point of module separation until Soyuz arrives over the landing zone.

A series of loud bangs will shake the Soyuz at 13:44:31 UTC when the craft will be 140 Kilometers above the Red Sea as the Orbital and Service Modules are jettisoned and pushed into opposite directions to avoid interference with the Entry Module. The OM and SM will burn up to a large extent in the atmosphere and surviving parts will crash land around 800 Kilometers short of the Soyuz landing site.

Soyuz will encounter the dense atmosphere at 13:47:25 UTC when crossing 100 Kilometers in altitude near the border between Iraq and Iran, beginning the 23-minute process of slowing down from 25 times the speed of sound to a complete stop. The Soyuz will use Hydrogen-Peroxide-fueled thrusters to reach the proper orientation for entry and stick to a pre-programmed attitude for the first 89 seconds of re-entry before active guidance kicks in.

80 Kilometers above the Caspian Sea, Soyuz will enter its plasma blackout and begin a series of bank maneuvers to dissipate energy and modify lift to control its downrange travel distance toward the planned chute opening point.

Blazing through the atmosphere, the crew will see their windows glow bright yellow as Soyuz is immersed in plasma. The craft’s heat shield will endure temperatures of 1,600°C and, in the process, slowly burn away to create a boundary layer between the extremely hot layer of crushed air in front of the Soyuz and the spacecraft’s structure.

At a speed of 210 meters per second, Soyuz will blow open the parachute compartment cover and deploy a pair of Pilot Chutes that pull the larger Drogue Chute from its bag – creating the most turbulent phase of the landing for the crew aside from touchdown itself as Soyuz shakes for around half a minute before stabilizing under the drogue that is tasked with slowing the capsule from Mach 0.7 to around 80 meters per second.

The huge orange-and-white Main Chute will deploy 7.5 Kilometers in altitude, marking the start of a series of events comprising the craft’s landing program. Once in a vertical descent, Soyuz will be re-hooked to a symmetrical arrangement followed by the jettisoning of the heat shield to expose the gamma-ray altimeter and the Soft-Landing Engines on the underside of the capsule.

Soyuz will vent leftover Hydrogen Peroxide from its tanks to avoid any issues with the corrosive substance in case of a leak after landing. Also, the blackened window covers will drop away and pressure inside the capsule will be equalized with the outside followed by a quiet descent toward the Kazakh steppe.

Touchdown at the planned landing spot 147 Kilometers south-east of the town of Dzhezkazgan is expected at 14:10:09 UTC, 8:10 p.m. local time, around 61 minutes before sunset. A fleet of vehicles will be standing by on the ground to rush to the landing site while a series of helicopters will enter a racetrack around the projected landing point to touch down next to the spacecraft within minutes of landing.

Inside the spacecraft, the shock-absorbing seats will move up and the crew will brace for contact with Terra Firma that will be cushioned by solid-fueled landing engines which fire when landing is imminent. Soyuz is expected back on Earth after a mission of 196 days, 17 hours and 53 minutes.