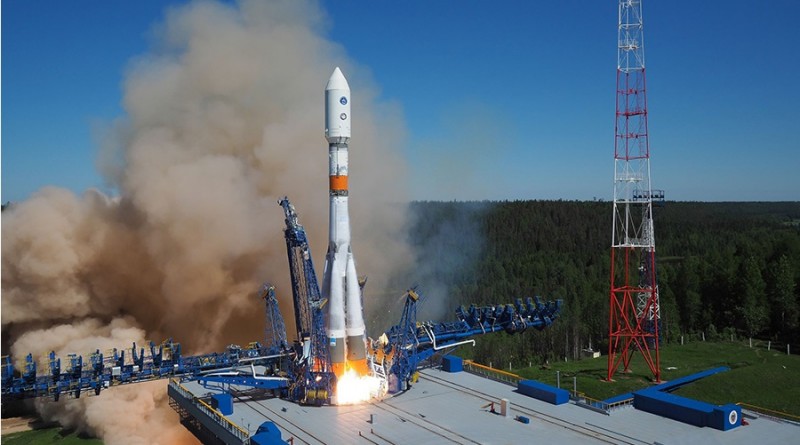 Press reports emerged on Monday claiming that Sunday’s successful launch of a Russian Glonass navigation satellite atop a Soyuz rocket was not without trouble.

According to the TASS press agency, citing sources within the space industry, Soyuz suffered a problem when firing its third stage, requiring the Fregat upper stage to extend its engine burns to lift the 1,600-Kilogram satellite into its target orbit.

Interfax cites sources claiming that the RD-0124 engine of the Block I third stage shut down prior to the scheduled time.

Soyuz, flying in its 2-1B configuration, lifted off from the Plesetsk Cosmodrome on Sunday at 8:44 UTC. The 46-meter tall rocket was set for a standard ascent mission beginning with a one-minute 58-second burn of its four liquid-fueled boosters before they dropped away to allow Soyuz to continue powered by its Core Stage alone, shedding the protective payload fairing along the way.


Four minutes and 47 seconds into the flight, Soyuz was tasked with its hot-staging sequence, firing up the RD-0124 engine of the third stage and initiating separation mechanisms to jettison the spent core. The modified Block I stage was to burn for around four and a half minutes prior to releasing the orbital unit comprised of the Fregat upper stage and Glonass satellite.

Fregat was then tasked with lifting the vehicle into a preliminary parking orbit, raising the high point of the orbit to around 19,150 Kilometers and circularizing the orbit – firing its re-startable S5.92 engine.

Spacecraft separation occurred three hours and 32 minutes after launch and Glonass-M No. 53 was tracked in a 19,125 x 19,152-Kilometer orbit, inclined 64.8 degrees. Fregat, after making a disposal maneuver, entered a 19,149 x 19,491-Kilometer orbit, in family with previous Glonass launches.

Fregat’s Guidance, Navigation and Control system is capable of detecting an underperformance of its launch vehicle and dynamically plot out an adjusted flight profile to make up for performance shortfalls in missions with propellant margins. This was clearly the case on Sunday as Glonass-M reached its planned orbit and Fregat managed to complete is disposal maneuvers.

The Russian Ministry of Defence confirmed good tracking and control of the Glonass-M No. 53 satellite after separation from Fregat, set to replenish the aging navigation satellite constellation.

No official information on the potential engine anomaly was available from Roscosmos or engine manufacturer KBKhA.

RD-0124 distinguishes the Soyuz 2-1B from the 2-1A version that uses the lower-performance RD-0110 four-chamber engine that has been in operation for five decades, amassing well over 1,000 missions. The RD-0124 is a derivative of the RD-0110, switching to a closed-cycle combustion scheme and eliminating four vernier engines by gimbaling the four engine nozzles for attitude control.

RD-0124 is a relatively new engine, making its debut on the Soyuz 2-1B in November 2004 and having flown over 30 times on Soyuz 2-1B and in a slightly modified RD-0124A version on the Angara family.

Soyuz 2-1B encountered a launch failure in 2011 blamed on the RD-0124 engine suffering a burn-through in one of its combustion chambers leading to an explosion. The failure claimed the loss of the Meridian 5 military communications satellite.

The RD-0124 uses a typical staged combustion cycle of Russian engines with an Oxygen-rich gas generator in which the entire LOX flow is combusted with a small portion of the fuel flow to create a hot high-pressure gas to drive the turbine of the engine which powers the turbopumps. The rest of the Kerosene is used for cooling of the chambers before being injected into the combustion chambers and burned with the oxygen-rich gas.

According to press reports, the Russian State Commission has begun looking into the potential engine anomaly to determine its cause. Implications on future Soyuz launches are unknown at this point.

The next launch of the Russian workhorse is lined up for June 24 when a Soyuz FG rocket will lift a crew of three into orbit on a half-year mission to the International Space Station. Soyuz FG uses the RD-0110 engine which has some commonality with the evolved RD-0124 closed cycle version. Soyuz 2-1B currently looks at its next launch at the end of June, set to lift a Tundra Missile Early Warning Satellite.