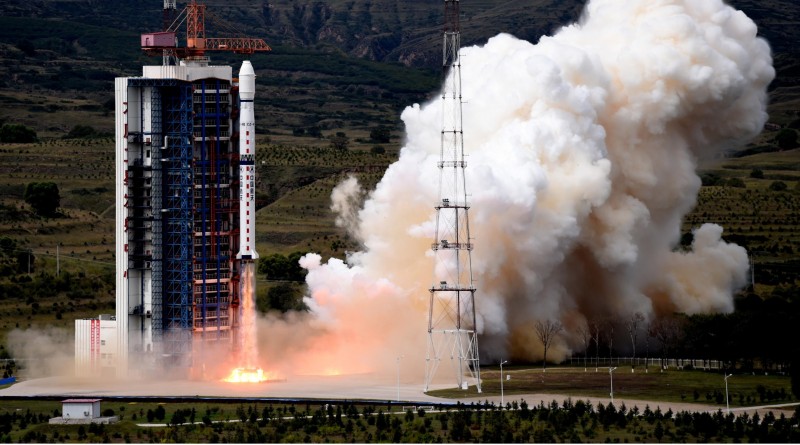 China’s Long March 4B rocket lifted off from the Taiyuan Satellite Launch Center on Monday, carrying into orbit the Ziyuan-3-02 Earth Observation satellite and a pair of microsatellites for Argentina.

The 46-meter tall rocket, conducting the fifth Chinese launch of the year, lifted off around 3:17 UTC and reached its planned polar orbit within ten minutes of liftoff.

Ziyuan-3-02 is the second in China’s third generation of Earth Observation Satellites, following the ZY-3-01 satellite orbited in 2012 and now approaching the end of its five-year service life. The first Ziyuan satellite was launched in 1999 to initiate a civilian Earth Observation Program for the collection of data useful for map generation, environmental monitoring and urban planning, however, the first two generations of ZY satellites were also employed for reconnaissance purposes.

The Ziyuan-3-02 satellite weighs in at around 2,640 Kilograms and hosts a pair of Earth imaging instruments, a Three-Line Array Camera and a Multispectral Camera.


The Three-Line Camera Array is comprised of three telescopic cameras – one looking directly to the ground (nadir) while the other two are offset by 22 degrees, pointing slightly forward and backward along the satellite’s flight path to be able to capture stereoscopic imagery for the generation of three-dimensional maps at high resolution. The instrument covers a 51-Kilometer wide swath on the ground and reaches a resolution of 2.1 to 2.5 meters making use of an improved imaging system compared to the first ZY-3 satellite.

The Multispectral Camera employs a three-mirror telescope and cooled detector system sensitive to four wavelength bands to capture full-color imagery as well as near-infrared data. It reaches a ground resolution of 5.6 meters and is primarily used for environmental/vegetation monitoring.

Operating from an orbit 506 Kilometers in altitude, ZY-3 can image any spot on Earth between 84 degrees south and northern latitude at a revisit time of five days, owed to an agile pointing system that allows for imaging at off-nadir angles up to 32 degrees. Typically, the satellite will observe an area of 1.2 million square Kilometers per day, split evenly between Chinese and foreign territory.

Riding shotgun as secondary passengers on this flight were Argentina’s first two ÑuSat spacecraft, marking the first deployment dedicated to the Aleph-1 Earth Observation Constellation based on microsatellite architecture. The current plan calls for 25 Aleph-1 satellites to be launched in the near term to establish an operational Earth Observation System delivering imagery offered on the commercial market.

Developed and built by Satellogic S.A, the ÑuSat spacecraft are 40 x 43 x 75 centimeters in size and weigh 37 Kilograms. The microsatellite bus and its imaging payload were tested as part of the BugSat-1 mission launched in 2014.

The satellites carry an imaging system operating in the visible and near infrared spectrum, generating still imagery and video of Earth at a ground resolution of up to one meter. Data products will be available to commercial customers and a constellation of multiple satellites will provide short turnovers from the request of imagery to their delivery, also supporting rapid re-visit times.

In addition to their imaging payloads, the ÑuSat spacecraft can be outfitted with a U/V Inverting Transponder for use by the Ham Radio community. The LUSEX payload on ÑuSat-1 was provided by AMSAT-Argentina and operates at the amateur frequencies of 435 MHz on uplink and 145 MHz for downlink with a 250mW power output.

Satellogic ultimately aims to operate a constellation of dozens of small Earth imaging satellites to deliver Earth observation products to its customers in near real-time. Four more ÑuSat spacecraft are set for launch in 2016.

As has been the case in the last several years, China has taken it slow in the opening months of the calendar year, but will soon increase the pace of launches.

Coming up in June is the maiden flight of the new medium-lift Long March 7, marking the grand opening of the Wenchang Satellite Launch Center on Hainan Island. Also launching from Wenchang will be the heavy-lift Long March 5 rocket when making its debut in September. China’s Tiangong-2 Space Station Module is set for liftoff in September and will be visited by a crew of three in October, performing the Shenzhou-11 mission.

Lined up for 2016 are a number of scientific satellites including the Tansat carbon-dioxide monitoring spacecraft, the Hard X-ray Modulation Telescope, and the Quantum Science Satellite – a widely-watched mission testing various fundamental quantum principles that may be put to use in communications systems of the future.

Monday’s mission utilized China’s Long March 4B rocket, standing 45.8 meters tall and measuring 3.35 meters in diameter. It has a launch mass of 249,200 Kilograms. The Long March 4B is based on the CZ-4 Family of launch vehicles and was developed by the Shanghai Academy of Space Flight Technology. Development of the Launcher began in 1989 and the CZ-4B completed its maiden flight on May 10, 1999 with the Fengyun 1C Weather Satellite.