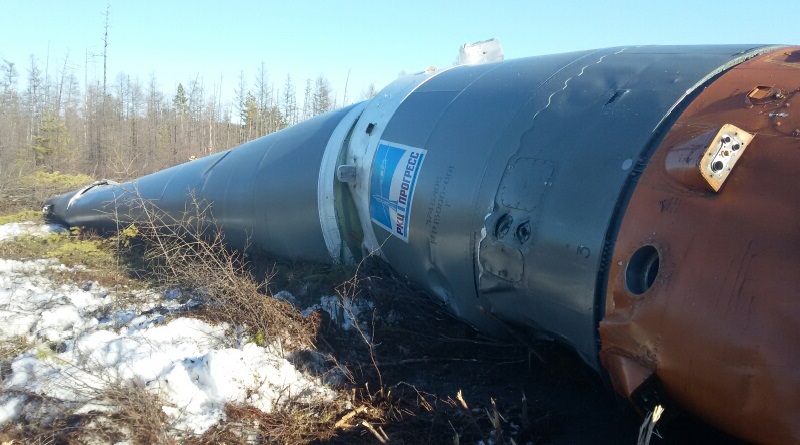 Last week’s premiere launch of Russia’s Soyuz rocket from the new Vostochny Cosmodrome in the country’s far east left plenty of work for engineers in a number of areas starting with repairs to the launch pad, as well as analyzing the environmental impact of the falling debris of the Soyuz rocket downrange from the new launch base.

Soyuz, flying in its 2-1A configuration – for the first time topped by a Volga upper stage – lifted off on Thursday at 2:01 UTC on a mission of over two hours tasked with delivering a trio of satellites into orbit – marking the completion of a five-year construction effort at the new Soyuz launch site. The launch came after a one-day delay caused by faulty equipment that prevented a vital telemetry signal from reaching the computers in charge of the critical final countdown sequence.

With Russia’s top officials, including President Putin, watching the launch, Soyuz climbed into a clear skies to begin a nine-minute ascent to orbit before handing off duties to the Volga upper stage.


Before Soyuz embarked on its mission, a unique photo of the rocket atop its launch pad was captured by one of the Russian Resurs-P Earth Observation satellites. The photo provides a view of the entire 1S launch complex, showing the various support facilities and the launch pad access road leading up to the Mobile Service Gantry which, by the time the photo was acquired, had been rolled back from the Soyuz rocket with its doors closed for liftoff.

The most prominent feature in the satellite photo is the large concrete flame trench and the comparably small Soyuz rocket sitting atop its launch pad.

The cause of the abort is still under investigation and has been characterized as a valve closure signal not arriving at the Flight Computers due to a defective connection. A 2.5-meter cable within the ground support equipment was identified as the culprit and shipped back to its manufacturer NPO Avtomatiki to check for cold solder joints. Two other possible faults that were also suspected to contribute to the launch abort were addressed overnight to set up for another launch attempt one day later.

The small issue of a fault within ground support equipment at a brand new launch pad turned into a political affair given the presence of Russia’s President Vladimir Putin at the launch site. In the wake of the one-day delay Putin reprimanded Roscosmos head Igor Komarov, Deputy Prime Minister Dmitry Rogozin, and Avtomatiki’s lead designer Leonid Shalimov.

News reports emerged on Sunday that Shalimov was temporarily relieved from his position as NPO Avtomatiki’s general director. A commission to look into the circumstances of the launch delay has been formed and will fly to NPO Avtomatiki on Tuesday with initial findings expected to be reported to Moscow by May 6.

Putin remained at the launch site for Thursday’s launch attempt that went off without any visible issues. Soyuz soared into sunny skies with a total thrust of 422 metric ton-force and swung to the north-west to aim for a Sun Synchronous Orbit. The four boosters separated from the vehicle after two minutes while the core stage continued firing until T+4 minutes and 45 seconds, departing the vehicle in the typical hot-staging sequence when the third stage began operation. After a four-minute burn of the Block I stage, the Volga upper stage was sent on its way in a Low Earth Parking Orbit below 200 Kilometers in altitude.

The Russian Mission Control Center TsUP reported that the Soyuz 2-1A rocket was successfully tracked by the Luch-5V satellite in Geostationary Orbit and telemetry was relayed in real time to TsSKB Progress, manufacturer of the Soyuz rocket family.

Because this was the first launch from the new spaceport, special activities were implemented at the downrange impact zones where search teams were present to locate the debris from the launch to recover them and complete a study of the environmental impact of the LV components.

Radar systems were deployed to the drop zones to track the falling launch vehicle debris and a search was completed with helicopters and drones.

Within a few hours of the launch, three of the four boosters were located within Drop Zone 981 in the Amurskaya region, some 360 Kilometers from the launch site. The fourth booster was found by Monday and all appeared to be in rather good condition with no leaks or fires reported from the crash sites. The wreckage of the boosters is expected to be recovered and returned to Vostochny.

The Payload Fairing, separating from the vehicle just over three and a half minutes into the flight was expected to fall in the Sakha (Yakutia) Republic in Drop Zone 983. Drop Zone 985 was called up for the 27.8-meter long Core Stage, expected to impact over 1,500 Kilometers from Vostochny. An engine chamber was found and Russian media outlets reported that parts of the Core Stage likely impacted in a frozen lake.

At the crash sites, ground samples were collected to assess any impacts of the falling launch vehicle debris on the environment. Initial results showed no concerns associated with the vehicle hardware.

The Block I stage of the Soyuz rocket entered a very short-lived orbit and met its fate on Saturday at 11:00 UTC when re-entering the atmosphere over the Atlantic Ocean, off the coast of southern Africa.

The Volga upper stage successfully performed a pair of engine burns in Thursday’s mission, raising its orbit to achieve a Sun Synchronous Orbit near 490 Kilometers in altitude for the deployment of the three satellites. First to depart the vehicle was the small SamSat-218D CubeSat followed by the simultaneous release of the Lomonosov and AIST-2D satellites. Volga completed a third engine burn to lower its perigee to 31 Kilometers and intercept the atmosphere for a destructive re-entry over the Pacific Ocean at 8:54 UTC, closing out a successful flight.

The manufacturer and operator of the 545-Kilogram Lomonosov satellite, NPO VNIIEM, issued a press release confirming that the spacecraft had successfully deployed its power-generating solar arrays and communications antennas. The satellite entered a stabilized orientation and began operations according to the automated timeline of the early mission.

AIST-2D was tracked by amateur radio operators in Russia on three subsequent passes with strong signals reported from the 531-Kilogram spacecraft.

Photos posted on the Novosti-Kosmonavtiki Forum showed Soyuz left considerable damage when departing the 1S launch pad at Vostochny. A large blast shield on the lower section of the Service Platform was torn off during liftoff and came to rest in the flame trench, directly in front of the pad. At what point the large structure became separated is not evident in the videos released of the launch.

Video from the BSVK camera system of the Soyuz, received at the Control Center in real time, was described as excellent by those who saw it, but the footage has yet to be released to the public. Editing of the video was expected to take several days to avoid misinterpretation by the press, likely by removing sections of the video showing damage to the launch facilities at Vostochny.

For repairs at the launch pad, teams will have plenty of time since the next Soyuz launch from the facility is not expected until next year.