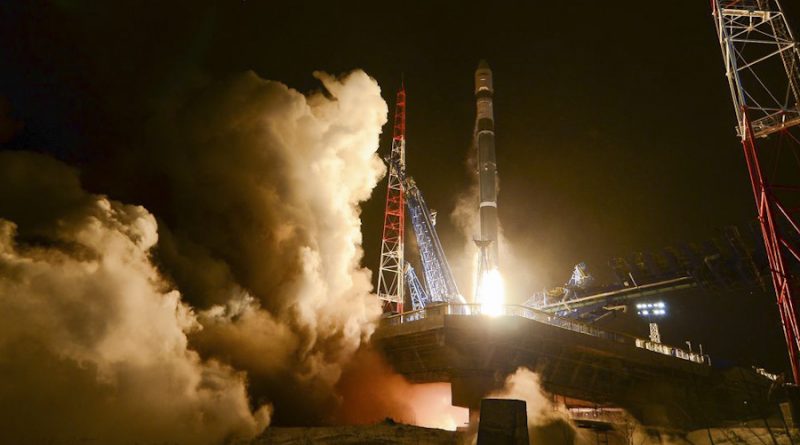 The rarely-flown single-stick version of Russia’s Soyuz rocket blasted off from the country’s Plesetsk Cosmodrome north of Moscow Friday evening on a highly classified mission for the Russian military with virtually no details known about the satellite it was carrying into orbit.

Soyuz 2-1v, conducting only its third mission, launched from Site 43/4 at 18:04:33 UTC on Friday, swinging to the north on what apparently was a high-inclination satellite delivery. Per the rocket’s standard mission profile, the NK-33 powered first stage was to fire for two minutes ahead of a four-and-a-half-minute burn of the modified Block I second stage followed by the handoff to the rocket’s Volga low-thrust upper stage for an initial boost into orbit. Volga’s mission profile would typically call for an initial burn to reach an elliptical transfer orbit ahead of half an orbit of coasting to set up for a circularization maneuver, creating a mission profile of around two hours.

The Russian Ministry of Defence confirmed a little under two hours after the day’s launch that the satellite had entered the planned orbit, though no information on the craft’s identity nor its operational orbit were provided.

The payload of Friday’s Soyuz 2-1v flight was not officially disclosed, though wide spread rumors based on various indications identified the payload as ‘Article 14F150’ – an obscure project name in line with various other satellite programs operated by the Russian military such as 14F137 for the Persona high-resolution reconnaissance satellites or the 14F149 Blagovest military communications satellite that will be Proton’s next payload in late July.


While specifics are known about Persona, Blagovest and many others, 14F150 had been a tougher case to solve. The designation began floating around in documentation, including budget break downs in 2013, but no information on the satellite’s purpose were revealed. A document from satellite and launch vehicle manufacturer TsSKB Progress tied the ominous designation to the Nivelir-ZU Geodesy project in 2013 which indicated the company was providing data and power system components for the project which was also identified as “Napryazhenie.”


The prime contractor for satellite integration and testing involved in the project appears to be NPO Lavochkin that has experience in different satellite applications. More recent documents from 2015 indicate a project designation of Nivelir-L (The suffixes have been used in previous programs to identify a successor generation with improved technology.)

Geodesy is a branch of Earth sciences that deals with the measurement and representation of Earth’s shape and gravitational field as a three-dimensional construct that varies over time due to crustal motion, tides and polar motion.

Measurements of Earth’s gravitational field – including time variable influences like changes in water distribution due to the Moon’s gravity and seasonal variation – can be detected precisely through the use of altimeters revealing ground topography and accurately tracking a spacecraft’s orbit which can be influenced by gravitational phenomena.

Geodetic data finds application in scientific studies looking at tectonic plate movements, gravitational properties and ocean currents, but is also critical in a number of military applications, especially considering the trend toward highly surgical strikes that require targets to be hit with extreme precision. Knowledge of Earth’s gravitational field can feed into guidance of ballistic missiles via high-precision geodetic coordinate systems to adjust their trajectories based on gravitational parameters to make them more accurate.

Russia’s flagship Geodesy program is known as GEO IK and debuted in 1981, building on the prior Sfera program that saw a total of seventeen satellites orbited between 1968 and 1978 to improve the accuracy of cartographic maps through a combination of stellar navigation and radio-based orbit tracking. GEO IK improved accuracy by a factor of 16 using a radar, Doppler system, laser ranging and a stellar reference technique. The last of 13 GEO IK satellites reached orbit in 1994 after which lengthy gap occurred due to technical and funding issues of a successor program.


The first GEO IK 2 satellite launched in 2011 but failed to enter its planned 1,000-Kilometer orbit due to a launch vehicle malfunction. Russia’s Geodesy gap was finally closed in 2016 when the GEO IK 2-2 satellite successfully reached orbit, hosting a radar altimeter supported by laser reflectors and a Glonass receiver for precise orbital tracking – enabling the satellite to measure surface features with an accuracy of 1.5 meters.

While GEO IK 2 is a publicly acknowledged program that primarily collects data for science and cartography, the satellites still operate under a military ‘Kosmos’ designation, indicating their data is also used in ICBM guidance system development. Whether the Nivelir satellites are specifically tailored to collect data relevant for the military is not known, though the secrecy involved in Friday’s mission would certainly suggest so.

Knowledge of a planned Soyuz 2-1v launch from Plesetsk only became known in early June and the sole official acknowledgement of the launch came via broadcast warnings for aviators, identifying the safety zones where the Soyuz stages and fairing are expected to impact – also providing identification of the ascent trajectory used on Friday.

Per navigational warnings, Soyuz was to head out of Plesetsk almost due north on a trajectory very similar to its most recent launch in 2015 that targeted a Sun Synchronous Orbit inclined 98.7 degrees. The warnings indicate Soyuz was to drop its first stage and payload fairing in the Barents Sea, then skim the North Pole and pass over North America by the time the Volga upper stage was in charge of powered flight.

The satellite launched on Friday is likely to be registered as Kosmos 2519 in Russia’s naming scheme of military-operated satellites. Orbital data provided through the Joint Space Operations Center in the hours and days after launch may provide some clarity on the satellite’s purpose and operational orbit.

Friday’s launch also served as sort of a return to flight for the Soyuz 2-1v after its most recent mission in December 2015 did not end as planned when the Kanopus-ST defence ministry satellite failed to separate from the Volga upper stage and ended up re-entering within a few days of launch. The failure was related to the craft’s purpose-built payload adapter which allowed Soyuz and Volga to be exonerated.

The Kosmos 2519 launch was only the third flight of the Soyuz 2-1v that debuted in 2013 as a highly modified single-stick version of the Soyuz workhorse to realize a light-to-medium lift vehicle by bringing together many flight-proven heritage technologies. When debuting, Soyuz 2-1v was the first in over 1,800 Soyuz launches not employing the iconic R-7 type design with four boosters around the core stage – a configuration that has been in operation since 1957.

Soyuz 2-1v employs a highly modified Block A first stage that relies on an NK-33 main engine finding its roots in Russia’s abandoned N1 lunar rocket plus an RD-0110R four-chamber steering engine that is an adaptation of the upper stage engine of the heritage Soyuz vehicle. The second stage is identical to that of the Soyuz 2-1B and Soyuz 2-1v also uses the upgraded Control System switching from analog to digital control systems to make the Soyuz launcher more flexible.

Loaded with around 145 metric tons of rocket-grade Kerosene and sub-cooled Liquid Oxygen, Soyuz 2-1v was revealed around 30 minutes prior to liftoff when the two halves of the Service Structure were retracted for the rocket’s pre-sunset liftoff. Ten minutes before launch, the critical final chilldown of the NK-33 engine was started and the Terminal Countdown Sequence began shortly thereafter to put the Soyuz through final reconfigurations ahead of launch.

Soyuz 2-1v made a thundering blastoff from Site 43/4 at 18:04:33 UTC, 21:04 local time at Russia’s primary military launch site. After a short vertical ascent, the Soyuz 2-1v rocket swung to its planned ascent course taking it almost straight north to a high-inclination orbit. Powered uphill by its single NK-33 engine and RD-0110R steering engine, the rocket had a total liftoff thrust of 188 metric ton-force.

The first stage of the Soyuz 2-1v shares some commonalities with the Soyuz 2 vehicles, but a number of components are changed: the diameter of the lower section of the stage is increased to 2.66 meters while the maximum diameter remains at 2.95 meters and overall length also remains at 27.8 meters.

The first stage uses Liquid Oxygen oxidizer and Kerosene fuel for consumption by a single non-gimbaling 1,630-Kilonewton NK-33 engine and a gimbaling four-chamber RD-0110R steering engine that generates 213.6kN of thrust at launch. Providing 11.6% of total thrust at liftoff, RD-0110R also contributes to overall vehicle performance and is not a pure steering engine.

Soyuz 2-1v retains the hot staging sequence between the Block A first stage and the modified Block I second stage, occurring around two minutes into the flight when the RD-0124-powered second stage fires up and the separation pyros initiate to enable the second stage to head on toward orbit.

Shortly after ignition of the Block I second stage, the protective payload fairing of the rocket was to be jettisoned, headed for an impact 1,550 Kilometers from the Plesetsk Cosmodrome. The Block I stage was tasked with a burn of around four minutes and 35 seconds, consuming 25 metric tons of LOX and Kerosene with its gimbaling 294.3-Kilonewton four-chamber engine.

After separation of the Volga, the highly maneuverable upper stage with multi-start capability was in charge of the mission for what was most likely a two-burn flight profile with the initial burn into an elliptical transfer orbit and the second burn acting as circularization.

Volga is 3.1 meters in diameter and 1.03 meters long, carrying between 300 and 900kg of propellant depending on the specific mission requirements. The upper stage sports a 2.94kN main engine, attitude control thrusters and a state-of-the-art navigation platform that includes star trackers for more precise orbital injections.