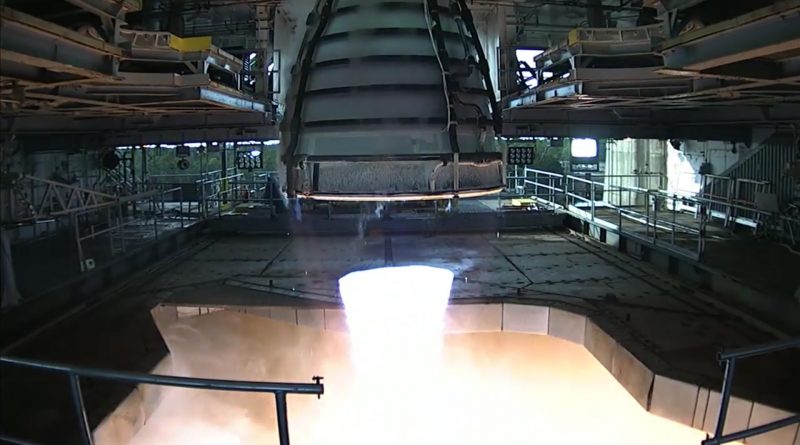 NASA’s concluded its 2017 RS-25 test program on Wednesday with a hot fire test of an RS-25 development engine at the Stennis Space Center in support of certification of production re-start hardware for new engines that will fly on the Space Launch System after the stockpiled engine inventory from the Space Shuttle Program has been used up. The firing, starting at 2:45 p.m., had a duration of 400 seconds, cut short by just over a minute due to a ground equipment issue.

The specific objectives of Wednesday’s test were twofold – a) demonstrating a new 3D printed POGO accumulator assembly that will be flown on the follow-on version of the RS-25 and b) qualifying another Engine Controller Unit for use on the initial SLS missions that will use refurbished Space Shuttle engines running modified control algorithms. Despite the abort of the test 70 seconds before its planned duration was met, both objectives could be checked off, classing the test as an overall success.


NASA conducted a series of RS-25 hot fire tests in the summer to finish certifying the existing RS-25 design for the operational parameters of SLS that require the engine to operate at its higher 109% thrust setting. Green-run tests were used to qualify Engine Control Units for installation on the SLS flight engines and a test in October test fired an engine earmarked for Exploration Mission 2, the second launch of the Space Launch System and the first to carry a crew.

Wednesday’s test involved development engine E0528 and took place on the A-1 test stand at Stennis, transitioning SLS engine testing from qualification of leftover Shuttle engines that will run out after four SLS launches to development testing for the RS-25 follow on version which will leverage the extensive design and flight heritage of the former Shuttle engine but incorporate new elements for a reduction in complexity and production cost. For the Space Shuttle, RS-25 was designed to be re-usable for up to 20 missions whereas SLS will only use the engine once – allowing some lifetime requirements and operational parameters to be loosened in favor of reducing cost.


According to NASA, the SLS RS-25 affordability initiative is “an effort to reduce the engine’s overall production costs by using new advanced manufacturing techniques while maintaining reliability and safety.” After the original RS-25 manufacturer Aerojet Rocketdyne received the award for future one-use RS-25 engines, supply chains were restarted and studies went in motion where cost reductions are safely possible given the lower lifetime requirements for the SLS engines.

The first piece of production re-start hardware finding its way to the test stand was a 3D printed POGO accumulator assembly – a beach ball-sized component that acts as a shock absorber to dampen vibrations, or oscillations caused by the fast-flowing propellants in the lines between the vehicle and the engine. Using additive manufacturing, Aerojet Rocketdyne is able to make the accumulator assembly with fewer welds, reducing the time and cost needed for its production.

Through 3D printing, the manufacturing time for the accumulator was cut in half, total parts were reduced by 78% and over 120 welds were eliminated. In fact, 3D printing led to a more robust design of the accumulator with slightly increased strength due to the use of a modified metal alloy.

“This test demonstrates the viability of using additive manufacturing to produce even the most complex components in one of the world’s most reliable rocket engines,” said Eileen Drake, CEO and president of Aerojet Rocketdyne. “We expect this technology to dramatically lower the cost of access to space.”


The E0528 engine was shipped to Aerojet Rocketdyne’s facility at Stennis after the August 30 green run of another engine controller and installation of the POGO accumulator was completed in November before the engine returned to the A-1 stand earlier this month.

The second objective of Wednesday’s test was acceptance testing of Engine Controller Unit Flight Model 3 that had been originally put through its green run test in May, but an inspection after the test revealed an issue that ended up requiring the replacement of a circuit board. To re-qualify the ECU, another test was needed and Wednesday’s hot-firing provided a good opportunity to check this off the task list before the end of the year. FM-3 is now set for integration with one of the SLS flight engines in storage at Stennis.

Wednesday’s test used the typical throttle sequence a flight engine would go through to demonstrate the accumulator for a nominal mission, starting up the engine to 100% of Rated Performance Level before going to the 109% setting as the normal thrust setting for the retrofitted Shuttle-era engines, also throttling back to 80% to mimic a bucket in the thrust profile at booster separation. The test was also the first to spend time at 111% RPL which is the target standard thrust setting for the production restart engines flying after SLS Mission 4 and plans for future performance certification at 113% exist to increase performance of the SLS launch vehicle.

Although the test was cut short by 70 seconds, NASA said “initial reports show the 3D-printed hardware performed as expected, opening the door for more components scheduled for future tests.” A total of four test runs were planned as part of this initial retrofit cycle focused on the accumulator while the second RS-25 development engine (E0525) is receiving a more substantial retrofit in the form of a production restart Main Combustion Chamber that is expected to reach the test stand in mid-2018. Further ECU testing will be performed as part of the retrofit tests as units are available.

Per the current plan, RS-25 will be fully qualified to restart engine production by the end of 2021; however, production of engines for the fifth and subsequent SLS core stages will be underway before then. Stennis is also seeing activity on test stand B-2 that will host the Exploration Mission 1 Core Stage for hot fire testing of its four RS-25 engines.