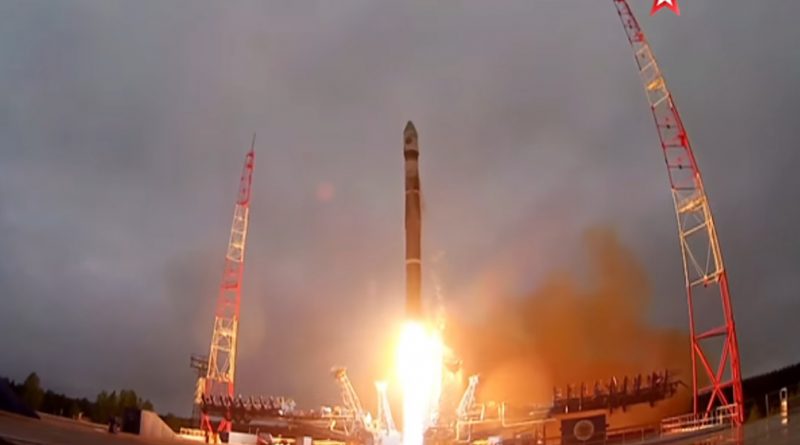 A previously unknown ‘Inspector Satellite’ separated from the Russian military-operated Kosmos 2519 satellite last week, the Russian Ministry of Defence confirmed on Wednesday and reported the small sub-satellite would be tasked with inspecting an unspecified Russian satellite via photo surveys.

The secretive Kosmos 2519 satellite was delivered to orbit on June 23 of this year by a Soyuz 2-1v rocket flying with a Volga upper stage that dropped the spacecraft off in orbit and deorbited itself later on the day of launch. No official identification on the satellite was provided, though rumors prior to launch indicated Soyuz may have been carrying the first Napryazhenie geodetic satellite, also known as 14F150, flying under the Nivelir program as a military geodesy program to collect gravitational field maps to improve long-range missile guidance.


However, orbital data showed the Kosmos 2519 satellite in an orbit of 652 by 671 Kilometers, inclined 98.05 degrees – a highly unusual orbit for a geodetic satellite and more in tune with a remote sensing mission. In support of that, the Russian defence ministry provided a press release confirming the successful launch and characterizing a twofold mission for Kosmos 2519 – remote sensing of the Earth and photographing objects in space. These two objectives seemed to be difficult to reconcile within a single mission – not considering the possibility that the launch involved two satellites that would eventually split up to pursue different tasks.

One peculiarity about the Kosmos 2519 mission was its planar proximity to the Kosmos 2486 satellite, the second Persona image reconnaissance satellite that has been in orbit since June 2013. Kosmos 2486 resides in an orbit of 707 by 719 Kilometers, inclined 98.14 degrees, flying around fifty Kilometers above Kosmos 2519’s initial orbit.


Kosmos 2519 remained quiet in an orbit of 652.2 by 670.6 Kilometers for the first month of its mission until starting a series of maneuvers leading up to Wednesday’s sub-satellite separation. The initial maneuver on July 27 placed the satellite into an orbit of 650.4 by 670.7 Kilometers followed by a series of maneuvers August 1-3 that put the spacecraft into a 648.9 by 668.4-Kilometer orbit.

This two-stage altitude reduction was accompanied by an intentional change in orbital inclination and additional planar maneuvers appeared to continue after the initial altitude adjustment, reducing inclination from 98.045 to 97.917°. These maneuvers modified the satellite’s Right Ascension of Ascending Node to match that of Kosmos 2486, a typical precursor for an orbital rendezvous.

The separation of the inspector satellite on Wednesday was confirmed through tracking data that showed it as “Object D” in an orbit of 649.8 by 669.7 Kilometers, 97.92° while the Kosmos 2519 parent satellite remained in a 649.4 by 668.2-Kilometer orbit. No significant orbital changes were seen for Object D, but minor maneuvers appeared to have occurred over the weekend, slightly reducing the sub-satellite’s orbit to 647.7 by 668.2 Kilometers.

Presently, Kosmos 2486 is trailed by the separated Object D by about half an orbit, approximately 52 minutes. If no maneuvers occur, the phase angle between Kosmos 2486 and Object D will close by late August 30 (UTC) at which point one of the two satellites could conduct rendezvous maneuvers to adjust its orbital altitude to link up with the other.

Given the operational nature of the Persona No.2 mission, it will likely be the inspector satellite (Object D) to maneuver up toward Persona’s orbit to carry out its imaging mission. Another possibility would be a long-distance pass with Object D ‘overtaking’ Kosmos 2486 (without maneuvering up for a close-proximity rendezvous), creating an imaging opportunity at a distance of no less than 30 Kilometers.

Object D, likely to receive a Kosmos designation later on, closely resembles the Kosmos-2491, 2499 and 2504 satellites that baffled observers after being launched as secondary payloads on Rockot missions in 2013, 14 and 15.


Kosmos-2491 launched in December 2013 alongside three Rodnik military communications satellites, initially being cataloged as a piece of debris since only three payloads were officially acknowledged by mission operators. However, amateur radio operators found that the debris object was transmitting radio messages which confirmed it to be an active satellite with Russian government officials retroactively registering the satellite under the Kosmos 2491 designation nearly half a year after its launch.

This story repeated in a more drastic form in May 2014 when a Rockot booster dispatched another trio of Rodnik satellites along with an unidentified ‘Object E’ in the same orbital neighborhood of the primary payloads some 1,500 Kilometers above the planet. Unlike the first ghost satellite, Object E began maneuvering within a few days of its launch, indicating it had more in store than its predecessor.

By August 2014, Object E had descended from a nearly circular orbit at 1,500 Kilometers to a 1,120 by 1,500-Kilometer orbit, nearly matching the orbit of the Briz-KM upper stage that had delivered it to orbit and then lowered its orbit per standard procedure after spacecraft separation. More maneuvers followed and Object E eventually linked up with the Briz-KM, coming within one Kilometer to the inert upper stage on November 9. By that point, the satellite had been re-cataloged as Kosmos-2499 to reflect its active nature and another rendezvous took place on November 25 with the satellite remaining within one Kilometer of the Briz-KM for the majority of the day. After another close approach on November 29, the mysterious satellite began transmitting public data in Morse code and appeared to settle down.

The first official comment on the Kosmos 2491 and 2499 satellites came at the end of 2014 from Roscosmos head Oleg Ostapenko to shut down rumors of Russia developing possible ‘killer satellites’ that emerged in western press over the course of the year. Although Ostapenko said the satellites had finished their missions, Kosmos 2499 remained active in early 2015 before apparently becoming dormant for over a year until a puzzling resurrection in March 2016 and further orbital activity into 2017.

Kosmos-2504 continued to step up the game – riding into orbit in March 2015 alongside three Gonets-M communications satellites, the civilian counterpart to Rodnik, operating in a similar orbit. Unlike its predecessors, Kosmos-2504 started out in the Briz-KM disposal orbit and its existence was acknowledged right away. The satellite started rendezvous maneuvers with Briz-KM within a few days of launch and, according to satellite trackers, came into contact with Briz-KM – either in a deliberate docking or an unintentional impact that left the upper stage in a distinctly higher orbit. The objects separated for several months before a second rendezvous campaign was started and Kosmos 2504 remained active in 2017, possibly linking up with a piece of Chinese space debris for a flyby at around one-Kilometer distance.

It remains to be seen what the inspector satellite will be up to with respect to Kosmos 2486 – given the military nature of the mission, information on the upcoming rendezvous will have to be gleaned from public tracking data released by the U.S. Joint Space Operations Center.

Efforts have been underway by three of the large space-faring nations in recent years to expand military and intelligence-gathering capabilities in space, evident in a number of orbital regimes including activities in Low Earth Orbit to demonstrate rendezvous techniques and remote manipulation and further up in Geostationary Orbit where plenty of eavesdropping and close-up imaging satellites roam.

China explored the tools of inter-satellite rendezvous and in-space grappling with the Chuang Xin 3 (CX-3), Shiyan 7 (SY-7) and Shijian 15 (SJ-15) satellites launched in 2013. SJ-15 and CX-3 completed a series of rendezvous maneuvers while SY-7 remained quiet until separating an object for a series of approach and grapple exercises. Launched in 2016, the Aolong-1 satellite tested out a robotic arm that could grapple other space objects.

Higher up in Geostationary Orbit, China, Russia and the U.S. are operating satellites that are known to park next to other GEO spacecraft in an effort to listen in on communications. Another surveillance mission in GEO is the U.S. Geosynchronous Space Situational Awareness Program that currently operates two pairs of maneuvering satellites that can complete close-up inspection of other satellites in Geostationary Orbit via imaging and radio characterization.