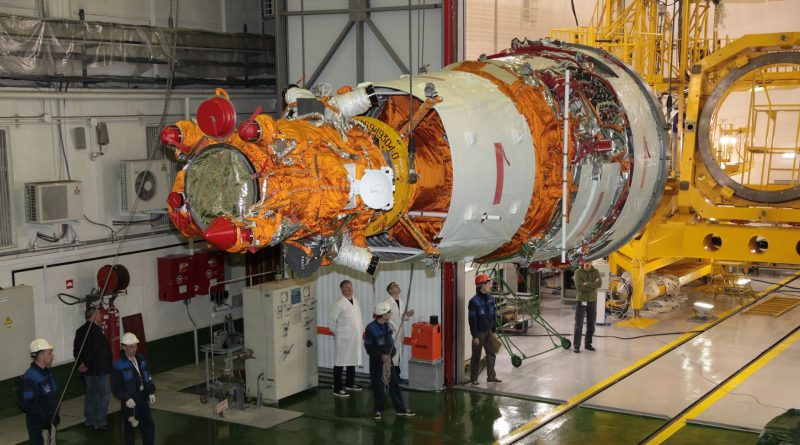 The Resurs-P No.3 Earth Observation satellite launched atop a Soyuz rocket on Sunday encountered problems during the critical deployment of its solar arrays, failing to deploy one of its two power-generating arrays. While the issue is not life-threatening to the satellite at this time, only one array will not permit the satellite to function at full capacity and work is underway to assess the problem.

Resurs-P No.3 lifted off at 18:56 UTC on Sunday atop a Soyuz 2-1B rocket launching from Site 31/6 at the Baikonur Cosmodrome.

The launch came only one day after the Soyuz rocket aborted its countdown during the start-up sequence of its booster and core stage engines. The culprit of Saturday’s engine cutoff was an issue with one of the engine igniters, failing to deliver the required signals of ignition to the flight computers. Because the abort was issued before the propellant valves of the engines were opened, no refurbishment of the RD-107A and RD-108A engines was necessary and teams could re-set for another attempt with new igniters.


Lifting off from Baikonur, Soyuz soared into the night sky with a total thrust of 422 metric-ton-force and fired its boosters for just under two minutes ahead of jettisoning them to head on under the power of the core stage alone. The core stage fired until T+4 minutes and 45 seconds, handing off duties to the modified Block I upper stage and its closed-cycle RD-0124 engine for a 4.5 minute burn.

Separating the payload fairing just seconds after staging, Soyuz headed into orbit, shutting down the upper stage nine minutes and 20 seconds after liftoff. The 5,730-Kilogram Resurs-P No.3 satellite was sent on its way two seconds later, embarking on a seven-year mission.

The Joint Space Operations Center provided the following orbital parameters for the Resurs-P No.3 satellite and Block I upper stage:

Arriving in its target orbit, Resurs-P No.3 was tasked with establishing a stable orientation and deploying its two solar arrays in the minutes after separating from the rocket. According to a report by Interfax, the satellite was successful in opening one of its two power-generating solar arrays while the second did not open.

Teams began analyzing data and are hopeful that the array may deploy as a result of the vibration and acceleration of the first orbit-raising maneuver which will likely be carried out as scheduled on Orbit 37. Another firing of the satellite’s main propulsion system is expected during Orbit 69 to enter an orbit close to 477.5 Kilometers in altitude.

Should the array remain closed, Resurs-P No.3 could still operate at partial capacity under a power management plan, according to the source quoted in the Interfax report.

Resurs-P is part of Russia’s civilian Earth Observation and remote sensing program, operating differently-instrumented satellites from different orbits with Resurs in charge of delivering the highest resolution of images in the panchromatic and multi-spectral bands.

The Resurs satellites employ the Yantar satellite bus – a robust satellite platform that started out supporting film-return payloads in 1974 and has since gone through several generations to keep up with current technology.

Yantar started out as a purely military satellite platform before being modified to host electro-optical payloads and being inaugurated in the civilian satellite programs. Currently, Yantar is used for the Persona military reconnaissance satellites and the Resurs-P satellites that are very similar in design.