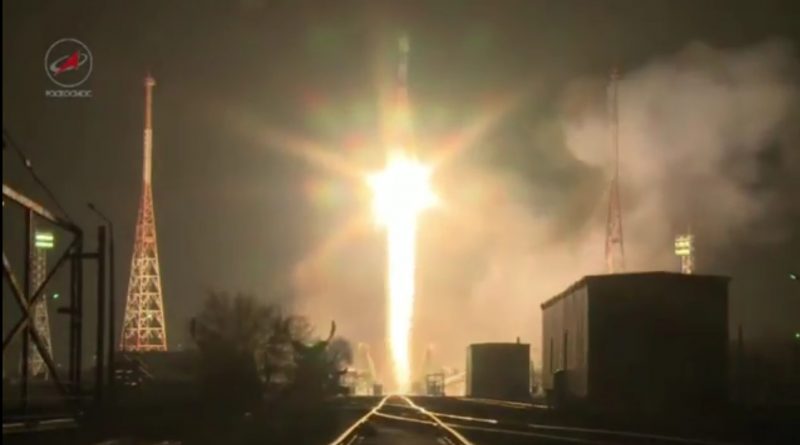 Russia’s Soyuz rocket lifted off on Sunday from the Baikonur Cosmodrome, lighting up the night skies for the vehicle’s first of three launches planned this month and the third worldwide orbital launch this week.

Soyuz rose from its launch pad at Site 31/6 at 18:56 UTC, 0:56 a.m. local time on Monday, roaring into the dark to deliver the Resurs-P No.3 Earth Observation Satellite to orbit.

Topped by the 5,700-Kilogram satellite, Soyuz flew in its most advanced 2-1B configuration, aiming for an elliptical Low Earth Orbit for the delivery of the satellite 9.5 minutes after liftoff. All flight events occurred as expected and Resurs-P No.3 was released after a seemingly flawless ascent mission.


Resurs-P is part of Russia’s civilian Earth Observation and remote sensing program, operating differently-instrumented satellites from different orbits with Resurs in charge of delivering the highest resolution of images in the panchromatic and multi-spectral bands. The civilian Earth Observation Program is operated separately from the military reconnaissance programs, though the Resurs satellites are known to be similar in design and capability to the Persona optical reconnaissance craft.

The Resurs program saw is first launch in 1979, starting out with a series of film-return satellites using the Zenit architecture as a basis, inherited from a military program that was developed years earlier. The first electro-optical Resurs satellite, capable of sending images to the ground via radio, was launched in 1983, but the transition from film-return craft to the exclusive use of electro-optical imaging satellites was not completed until the 1990s. The military programs relied on the robust film-return craft until last year when the last Kobalt satellite returned its films to the ground.

Resurs-P was initiated as a project to follow-up on the Resurs-DK satellite launched in 2006 to bridge a gap between the satellites launched in the 1990s and a new permanent program. To consist of at least five satellites launched until 2019, Resurs-P saw its first launch in June 2013 followed by the second satellite in December 2014. The program was declared operational in mid-2015 after extensive testing involving both prototype satellites.

The Resurs-P No.3 satellite weighs in at 5,730 Kilograms using the Yantar satellite bus as a platform, a robust system inaugurated in the 1970s hosting military film-return payloads. Over the years, Yantar was regularly upgraded and now supports electro-optical imaging payloads among other instruments for civilian and military use.

The Resurs-P No.3 satellite will collect images at a resolution of one-meter using its Geoton 50-centimeter telescope and digital image processor. Multi-spectral imaging for full color imagery and near-infrared data is available at a ground resolution of three meters across a 38-Kilometer swath. A Hyper-Spectral Imager is used to collect spectral data for application in a variety of areas and a pair of Wide Field Multispectral Imagers deliver panchromatic, color and infrared imagery across wide ground swaths of up to 442 Kilometers.

Soyuz came close to launching on Saturday when it suffered a rare on-pad abort during its ignition sequence just 15 seconds prior to clocks hitting zero. The АВД Engine Shutdown command was sent automatically by the flight computer when it failed to detect that the igniter in one of the engines had started.

Because the abort occurred before any propellant valves were opened, no engine refurbishment was necessary and teams could press into a 24-hour recycle, replacing the engine igniters and completing detailed telemetry analysis.

Standing atop its launch pad for a late night liftoff, Soyuz 2-1B headed into an eight-hour long countdown, starting with systems activation for checkouts and tanking preparation at the launch pad. Soyuz was put through a set of tests while teams completed battery installations and removed protective covers from the 46-meter tall rocket.

The Russian State Commission met to review the status of countdown operations and data gathered after Saturday’s abort, clearing the vehicle for propellant loading. Re-fueling picked up inside L-4 hours when the vehicle headed into a brief chilldown before Liquid Oxygen and rocket-grade Kerosene Propellants started flowing into the four boosters and core stage followed a bit later by the modified Block I upper stage. In addition to 274 metric tons of propellants, the Soyuz received Nitrogen for tank pressurization on the boosters and core stage, and Helium to serve the same purpose on Block I.

Propellant loading closed out around 90 minutes before launch and teams went through final hands-on steps to ready the rocket and Service Structure for retraction, beginning at L-35 minutes. Revealed atop its launch pad, Soyuz completed final setup tasks of its Flight Control System while the Resurs satellite switched to battery power for its ride into orbit.

Six minutes prior to liftoff, Soyuz entered its fast-paced Automated Countdown Sequence putting the launcher through the final steps ahead of liftoff. Soyuz purged its engines with Nitrogen to ensure a controlled ignition, the tanks started ramping up to flight pressure when LOX and LN2 loading wrapped up and the launcher switched to internal power, also assuming control for the final minute of the count.

The third stage umbilical retracted from the rocket and was followed by the Core Stage umbilical tower at T-20 seconds, coinciding with the ignition of the RD-107A engines on the boosters and the RD-108A on the core. The Hydrogen-Peroxide-fueled turbopumps spun up to flight speed and the engines throttled up to an intermediate thrust level before going to full power – overcoming counterweights and lifting Soyuz off its pad.

Soyuz blasted off at precisely 18:56:00.335 UTC, thundering into the night skies with a total thrust of 422 metric tons. The vehicle balanced in a vertical posture for around ten seconds before pitching and rolling onto a precisely planned course to home in on a polar orbit.

Guzzling down 1,600 Kilograms of propellants each second of the flight, Soyuz quickly started heading downrange, visible for several minutes after liftoff in a clear night at the Baikonur Cosmodrome. Pushing through Mach 1 and encountering Maximum Dynamic Pressure, the Soyuz continued to show rock-solid performance according to real-time calls made by the launch team.

The four boosters helped accelerate the vehicle to at speed of over 1.5 Kilometers per second and separated one minute and 58 seconds into the flight when Soyuz had reached an altitude close to 60 Kilometers. Upon shutdown of the RD-107A engines, the boosters were separated by pyrotechnic systems and pushed outward to tumble back to the ground, each having burned 39,600 Kilograms of propellants.

Heading on towards orbit, the Soyuz relied on the RD-108A engine of the Core Stage alone, generating 102 metric-ton-force of thrust when flying through the rarefied upper atmosphere.

The burn of the 27.8-meter long Core Stage finished four minutes and 45 seconds after launch after consuming 91,000 Kilograms of LOX and Kerosene. Two seconds after engine shutdown, the RD-0124 engine of the Block I upper stage ignited and pyrotechnics cut the connection between the stages to permit the vehicle to continue powered ascent with 30 metric tons of thrust.

Just two seconds after staging was complete, Soyuz separated its protective payload fairing as aerodynamic forces were no longer a danger to the delicate spacecraft structure.

Block I and its improved closed-cycle engine were in action for a burn of four and a half minutes, tasked with delivering the stack to an elliptical orbit of 200 by 475 Kilometers at an inclination of 97.3 degrees. The launch team continued to report good structural parameters and engine performance throughout the firing of the third stage engine.

Shutdown of the third stage was completed nine minutes and 20 seconds into the flight with separation of Resurs two seconds later. To close out its mission, the Block I stage was to open up a reaction nozzle to move away from the released payload, marking the completion of the year’s second Soyuz launch.

It was the first of three planned Soyuz flights this month with the crewed Soyuz TMA-20M lined up for liftoff on the 18th and the Progress MS-2 cargo craft on the 31st.

For Resurs-P No.3, the mission was to begin with the deployment of its solar arrays, the stabilization of its orientation in space and the initiation of regular communications sessions with ground stations to enter testing and commissioning operations. In the first several days of its mission, the satellite will use its main propulsion system for a circularization maneuver to reach its operational orbit of 477.5 Kilometers at an inclination of 97.28 degrees. Two maneuvers will be needed to achieve that orbit, typically performed on Orbits 37 and 69.