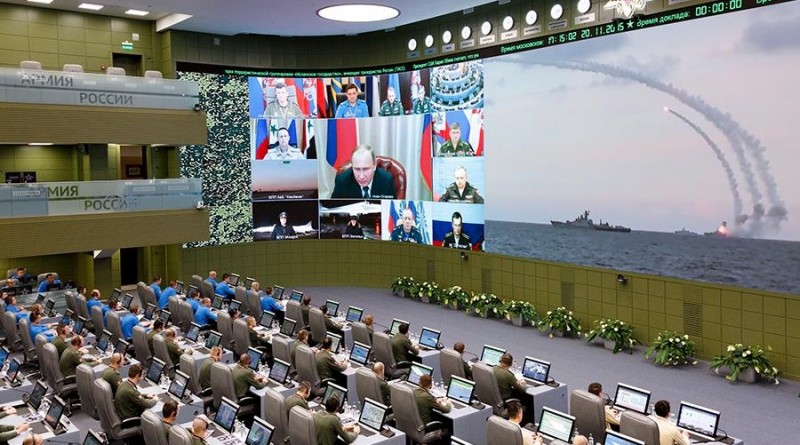 The Russian Ministry of Defence is reinforcing its space-based reconnaissance capabilities in the Middle Eastern Region to assist in Russia’s ongoing military activities in Syria. Russia has been carrying out airstrikes on terrorist facilities in Syria for a period of weeks and relies on intelligence gathered by its satellite fleet for the identification of targets.

Russia’s military intervention in the Syrian Civil War was initiated on September 30, 2015 and primarily consists of airstrikes and missile attacks against militant groups in the north-western region of the country. By the end of October, the Russian Defence Ministry announced that over 1,000 sorties had been carried out, destroying over 800 targets. France joined military efforts in Syria in response to last Friday’s terrorist attacks in Paris for which the Islamic State claimed responsibility.


In a statement released on Tuesday, the Russian Ministry of Defence reported on its use of satellites in the ongoing military operation. “Space reconnaissance means of the Middle Eastern region are being reinforced to increase the efficiency of detecting enemy facilities and the accuracy of determining target coordinates,” the statement read. ” Ten spacecraft have been assigned to conduct imagery and radar reconnaissance, including civilian-purpose spacecraft. The orbits of a number of satellites have been corrected to allow them to monitor Syrian territory with required periodicity.”

No details were given on which satellites were being used but recent orbital moves by Russia’s military and civilian satellite fleet offer some insights into the spacecraft involved in the operation.

Persona 2 had suffered a memory failure in late 2013 and was only partially controllable, also seen in a loss of orbit control. In mid-2014, the satellite’s command and data system was restored by implementing a software patch. Persona 2 delivered imagery in July 2014 in the Russian-Ukrainian conflict over the downing of flight MH17.

Persona-3 has not conducted any orbital maneuvers since its launch and circularization in July and has one morning pass every two days (between 6 and 7 UTC) taking it over the general area of interest. It is currently tracked in a 706 by 725-Kilometer orbit. The older Persona 2 satellite conducted orbital maneuvers to enter a more favorable setup for imaging of Syria.

In the first half of October, the satellite flew in an orbit of 710.5 by 721.9 Kilometers before conducting a slight reduction of its perigee in the last week of October, reaching an orbit of 709.8 by 721.9 Kilometers. Another similar maneuver occurred in the night of November 15 and placed the satellite into an orbit of 708.8 by 722.1 Kilometers. These maneuvers put the orbital plane of Persona 2 in the proper position to allow it to gather morning imagery of Syria on days Persona 3 has no direct overhead passes.

The only radar reconnaissance asset currently in operation by the Russian military is the first Kondor satellite launched back in 2013.

After launch, the orbit of the satellite decayed from an initial altitude of 505 Kilometers to an orbit of 485 by 490 Kilometers that was maintained until October 20 when a propulsive maneuver was performed, reducing the orbit to 479 by 489 Kilometers. Since then, the orbit has been continuously decaying and Kondor is currently tracked in a 478 by 484-Kilometer orbit. Currently, the satellite has one or two daily passes over Syria, suitable for radar imaging.

The Bars-M topographic imaging and high-resolution satellite launched in February had been kept in a 550 by 566-Kilometer orbit and performed two orbit-raising maneuvers in late September and early October to enter an orbit of 565 by 577 Kilometers. In this orbit, the satellite is currently passing over the region of interest in the pre-sunrise hours, possibly conducting infrared imaging – though there is no information whether this capability exists on Bars-M. Starting in the first week of December, the Bars-M satellite will be passing over Syria in the afternoon/evening hours, enabling daytime imaging with a resolution up to 1.1 meters.

Another satellite that is most likely part of the space-based support assets is the Lotos-1 Electronic Intelligence Satellite tracking radio emissions and passing over the region up to four times a day. Additionally, as stated by the Ministry of Defence, civilian satellites are also being used, notably the Resurs-P satellites which can be considered Persona’s civilian twins, reaching a sub-meter ground resolution. In their orbital setup, the two Resurs-P satellites have favorable daytime imaging passes every day, alternating between the two satellites, and also have nighttime imaging opportunities every other night. The Resurs satellites are outfitted with payloads capable of infrared imaging which may be in use for the night passes.

The Resurs-P system, currently consisting of two satellites, was officially declared operational by the Russian Space Agency on November 11 after extensive testing involving the first satellite that was followed by the launch of the second satellite. Both are now in service and their orbits have been set up to provide optimized image revisit times.

Images at 2-meter ground resolution are also being provided by the Kanopus-V #1 satellite launched in 2012. Its 504 by 506-Kilometer orbit permits daytime direct-nadir imaging of Syria for three consecutive days followed by a three-day break. Resurs DK, in a 559 by 565 km orbit, has a similar revisit setup and can deliver 1-meter ground resolution images in the panchromatic band and 2.5 meters for multispectral imagery.

The Russian Ministry of Defence stated that “a future reinforcement of the orbital group with operational reserve spacecraft is planned.”