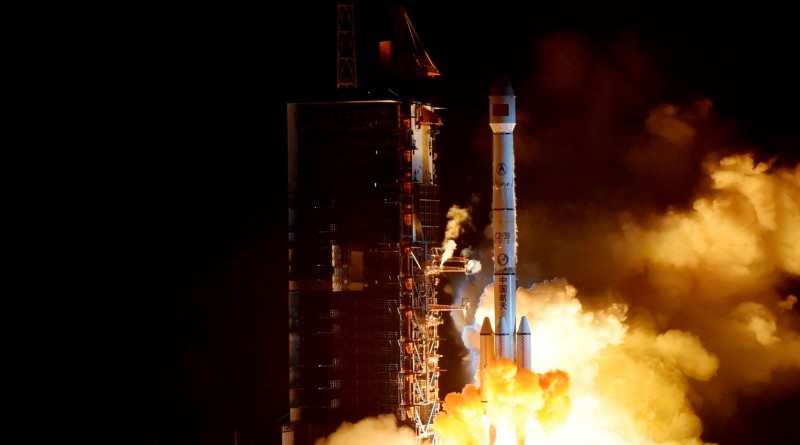 China’s heavy-lift Long March 3B lifted off from the Xichang Satellite Launch Center on Friday, carrying a communications satellite to orbit for the small Asian country of Laos. Friday’s launch occurred at 16:07 UTC and marked the third CZ-3B mission over a five-week period as China keeps up the high launch rate expected for the closing months of 2015.

LaoSat-1 is the country’s first Geostationary Satellite, to be operated by the Laos National Authority for Science and Technology to provide television and data services using a C/Ku-Band payload. The satellite and its launch were contracted through the China Great Wall Industry Corporation that offers Chinese space systems including satellites and launch vehicles on the international market.

Based on the DFH-3B satellite platform, LAOSat-1 weighs in at approximately four metric tons with a bus size of 2.2 by 2.0 by 3.1 meters, capable of hosting payloads in the 500kg range. Spanning 18 meters with its solar arrays deployed, the satellite will take up station at 128.5 degrees East in Geostationary Orbit to provide coverage of southeastern Asia. The satellite is outfitted with 14 C-Band and 8 Ku-Band transponders to deliver television and data services.


The LAOSat-1 satellite will complete an expedited commissioning campaign in Geostationary Orbit to be ready for operation on December 2 to broadcast the 40th Independence Anniversary festivities in Laos. Originally, the launch of LAOSat-1 was announced for Saturday through the usual navigational warnings. On rather short notice, new warnings were published on Thursday indicating that the launch was moved up by 24 hours – a capability demonstrated by the Chinese earlier this year to avoid bad weather getting in the way of a launch.

Long March 3B/E is the current heavy-lifter in the Chinese launch vehicle fleet, a position it will maintain until the Long March 5 flies for the first time in 2016. CZ-3B has a launch mass of 456 metric tons and stands 56.3 meters tall with a diameter of 3.35 meters. It consists of a three stage stack with four boosters clustered around the core stage. The boosters, first and second stages burn toxic hypergolic propellants, Unsymmetrical Dimethylhydrazine and Nitrogen Tetroxide, while the re-startable third stage uses Liquid Oxygen and Liquid Hydrogen Propellants.

Friday’s liftoff was preceded by an eight-hour countdown that started with the activation of the launch vehicle for an extensive testing campaign before the third stage headed into propellant loading operations. Filling the stage with 18,200 Kilograms of supercold LOX and LH2 was a multi-hour process and propellants were kept topped up at flight level throughout the countdown – the hypergolic tanks of the rocket were loaded prior to the countdown. Overall, Long March 3B was filled with 400 metric tons of hypergolics to be consumed in the first minutes of its flight.

Counting down towards a midnight launch, Long March 3B went through final tests and LAOSat-1 was switched to battery power, ready for its ride to orbit. In the final minutes of the count, all access platforms were retracted from the rocket and the launcher transitioned its systems to flight configuration – pressurizing its tanks, switching to internal power and assuming control of the count.

At 16:07:00 UTC, Long March 3B/E received its launch command and ignited the boosters and core stage that soared up to a total launch thrust of 604 metric ton-force. Four seconds after ignition, Long March 3B blasted off, lighting up the night skies over the Xichang Satellite Launch Center in the Sichuan province, located in south-western China. The rocket climbed vertically for a few seconds before starting to pitch over and roll onto its precisely planned course taking it south-east across the Chinese mainland before heading out over the Pacific.

With all engines at full throttle, the rocket burned 2,350 Kilograms of propellants each second of the flight as it raced uphill, passing the speed of sound and encountering Maximum Dynamic Pressure one minute into the flight. Each of the four boosters provided 75,500 Kilogram-force of additional thrust over the initial portion of the flight using a DaFY-5-1 engine that burned though a total of 41,200 Kilograms of propellant per booster. The four boosters concluded their burn 140 seconds after liftoff, separating from the core stage by firing pyrotechnic separation mechanisms and small retrorockets to ensure a clean separation.

Without the boosters, Long March 3B headed on powered by its core stage alone, employing a DaFY-6-1 cluster comprised of four engines to generate 302 metric tons of thrust. The 24.8-meter tall core stage consumed 186,200 Kilograms of hypergolics over the course of a burn lasting two minutes and 38 seconds. Immediately after shutdown on the first stage, the second stage of the rocket commanded its four-chamber vernier engine to ignite to initiate the hot-staging sequence.

Firing 14 pyrotechnic bolts, Long March 3B separated the spent core stage and used the second stage vernier to pull away before igniting the DaFY-20-1 engine of the second stage, reaching a thrust of 75,650 Kilogram-force to continue boosting the stack into orbit. The second stage of the rocket stands 12.9 meters tall and holds 49,400 Kilograms of propellant, using the four-chamber vernier engine for control.

While the second stage was firing, Long March 3B departed the dense atmosphere, making it safe to jettison the protective payload fairing and exposing the LaoSat-1 spacecraft for the rest of its journey into orbit. The second stage fired for 178 seconds, its vernier burning six seconds longer than the main engine.

Cutoff on the second stage occurred just after T+5.5 minutes and was followed by the pyrotechnic stage separation sequence aided by solid-fueled retrorockets that moved the second stage away from the vehicle. Immediately after staging, the third stage fired up its two cryogenic YF-75 engines generating a thrust of 16,000 Kilogram-force. The initial burn of the 12.4-meter long third stage accelerated the vehicle to orbital velocity, aiming for a Low Earth Parking Orbit.

The burn lasted a little over four and a half minutes and delivered the third stage into a 190-Kilometer orbit. Next was a coast phase of around 11 minutes to allow the vehicle to continue flying to the south-east, heading towards the equator so that the second burn could be performed around the equator passage in order to position the high point of the orbit above the equator, standard practice in GTO missions. The second burn of the upper stage was nearly three and a half minutes in duration and was followed by a variable velocity adjustment that involved the vernier engines of the third stage which continued to fire until the navigation platform sensed that the targeted injection velocity was achieved, thus optimizing the accuracy of the orbital insertion.

Separation of the LaoSat-1 spacecraft was expected just around T+26 minutes into the flight and launch success was reported by Chinese observers, though official confirmation was not expected until some time later.

If the goal of having LaoSat-1 ready for operation by the 40th Anniversary of the Laos Independence still stands, the spacecraft will have to quickly raise its orbit to enter Geostationary Orbit, deploy its antennas and go through an expedited commissioning sequence.