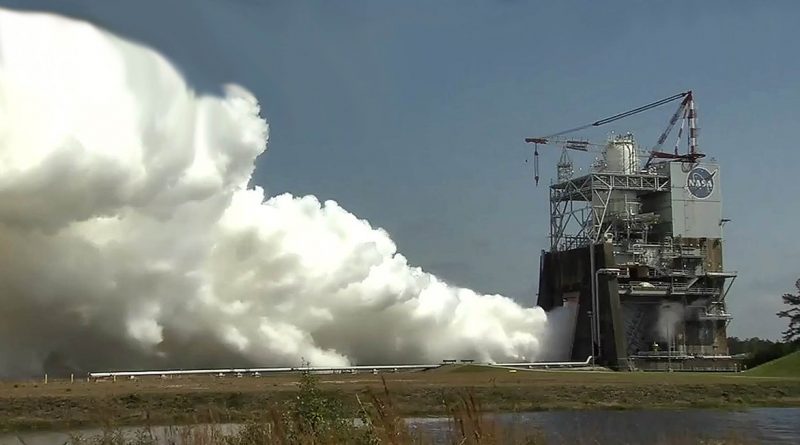 A former Space Shuttle development & test engine fired up at NASA’s Stennis Space Center for the second time this year in support of the Space Launch System program to close out a multi-year testing campaign toward the maiden launch of NASA’s new heavy-lifter.

Thursday’s test was 13th SLS engine test and the first of a flight-model flight controller, the first of several such tests to verify all of the controllers flying on the first SLS mission currently scheduled for late 2018.

The 500-second test utilized the A-1 test stand at Stennis and was carried out by NASA, prime RS-25 engine contractor Aerojet Rocketdyne and Syncom Space Services which serves as the prime contractor for Stennis facilities. Thursday’s test involved development engine 0528 and began at 20 UTC, primarily dedicated to putting the ECU-2 engine controller through a full cycle to verify the performance of the Honeywell-built unit in action.

The delivery of the Flight Model Engine Control Units (ECUs) had become a bottleneck in RS-25’s testing campaign, prompting teams to insert an additional test firing in February to verify a pair of small tweaks to the engine and its operation, specifically a low-pressure fuel duct and an increase in Liquid Oxygen inlet pressure that was the result of a request from the vehicle dynamics division to help SLS better deal with loads on the launch vehicle during ascent.

The Engine Controllers are the major change from the Shuttle-era RS-25 to the SLS main engine, incorporating a number of simplifications and changes to comply with the modern avionics system of SLS versus the decades-old Shuttle system. The first flight-worthy flight controller was delivered to the Marshall Spaceflight Center for a bench testing campaign while ECU-2 will become the first Engine Controller to support a mission, arriving at Stennis in early March to be integrated with Engine 0528 for Thursday’s test.


The engine controller builds the primary interface between the launch vehicle and all of the engine actuators and sensors, tasked with monitoring the engine’s performance, regulating the various valves and pumps to command changes in thrust and mixture ratio and ensure safe ignition and shutdown.

Over the course of the 500-second firing, the Engine Controller was put through its paces and tasked with commanding the engine through a series of thrust settings – maintaining the engine’s new nominal thrust setting of 109% for over half the test duration and throttling between 80 and 100% of rated performance. Additionally, the test verified a corner-case scenario for engine ignition at the lower boundary of LOX inlet pressures and strong fuel inlet conditions – continuing to verify the engine’s robustness ahead of its new role of powering SLS.

Green-run tests of the Engine Control Units are expected to occur once per month through May, yielding three fully tested controllers; the fourth will be demonstrated during the all-up test firing of the first SLS core stage. Following completion the tests, the controllers will be removed from the test engine and Aerojet Rocketdyne will be tasked with integrating them with the SLS engines planned to be used on Exploration Mission 1.

Per the current plan, two of the four engines to support that mission will undergo hot fire tests in July and September since they are new and were never acceptance tested under the Shuttle program. These two tests will also conclude the formal qualification testing campaign of the Engine Control Units.

Following acceptance tests of the SLS engines, development engine 0528 will return to the A-1 stand to begin a three-year test program to verify affordability changes for the re-start of RS-25 production of expendable rocket engines as opposed to the more-expensive Shuttle-era engines that were certified for use on 20 missions. These tests will verify design simplifications to reduce production cost of the new RS-25 model to be used once the Shuttle inventory has run out. Qualification testing will also raise the nominal thrust setting by another 2% to 111% and push the engines to their highest performance that can be safely achieved to give SLS the best possible payload capability.


Per the current plan, RS-25 will be fully qualified to restart engine production by the end of 2021.

The four finished EM-1 engines will return to Stennis once attached to the EM-1 core stage that is set for a full test firing on the B-2 test stand with all four engines running simultaneously to verify the performance of the full core ahead of the first SLS mission. The EM-1 mission remains scheduled for late 2018, but is currently under review for the possibility of flying that mission with a crew which would cause a fairly significant slip.