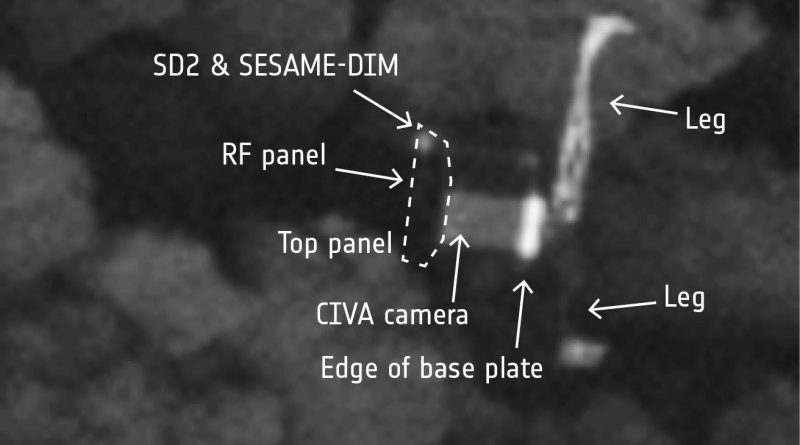 An out-of-this-world search effort came to a successful end 680 million Kilometers from Earth when ESA’s Rosetta spacecraft was finally able to locate the long-lost Philae lander.

The images taken last week clearly show the small lander wedged into a dark crack on the surface of comet 67P, explaining why the vehicle fell silent when its batteries were depleted after a difficult landing in November 2014.

The photos, taken on September 2 by Rosetta’s OSIRIS high-resolution imaging instrument, show the main body of the lander and two of its three legs. The close-up view was captured when the Rosetta orbiter flew only 2.7 Kilometers from the surface of the comet.

The finding comes only a month before the Rosetta mission will reach its end after over two years of exploration at comet Churyumov-Gerasimenko. The probe was launched back in March 2004 and completed a decade-long odyssey through the Solar System to finally arrive at its destination in August 2014. Philae, the small 100-Kilogram lander, was dispatched to the comet’s surface on November 12, 2014 – taking its place in history as the first craft to soft-land on a comet.


The historic landing was not without trouble though. Initial jubilation after the landing signal arrived on Earth turned into uncertainty when conflicting data arrived from the distant world indicating that the anchoring harpoons, supposed to hold the lander in place after touchdown, never fired. As it turned out later, Philae took a series of bounces making a total of three touchdowns before coming to rest.

Because Philae traveled quite a considerable distance during its bouncy landing, controllers on Earth had no idea where on the comet the lander came to rest. Nevertheless, the race against the clock was on as Philae only had a finite supply of electricity from its primary batteries and it was unknown whether solar power could be generated at the landing site.

The small lander operated for 56 hours and collected science data until the very last bit of power had been drawn from the batteries.

During its fast-paced mission, Philae delivered a few panoramic images from the comet, used a radio link with the orbiter to reveal the internal structure of the comet, employed its spectrometers to identify gases present around the nucleus, sounded the sub-surface below, collected an X-ray spectrum to look at the composition of the surface, and hammered a thermal sensor into the comet.

The big finale of Philae’s brief mission was drilling into the comet. While the SD2 drill was fully extended, it failed to collect any cometary material, likely owed to the fact that Philae was never in a stable position on the surface.

When Philae’s batteries ran out of juice, the lander headed into hibernation and teams were hopeful that the lighting situation at the still-unknown landing site may change as the comet made its way around the sun. Possibly, the hope was, Philae would wake up and resume its close-up study of the comet.

And indeed, the lander checked back in on June 13, 2015 for an 85-second transmission to Rosetta, reporting the lander to be in good health. A total of seven brief contacts were made until June 26 and a final contact occurred on July 9, but Philae never had enough power to perform any science operations.

In January 2016, ESA said it did not expect to hear from Philae again, but Rosetta continued listening for signals from the lander until late July.

Philae had been last seen by Rosetta’s imagers just before it first touched down on the comet. After the turbulent landing, Rosetta did gather photos from different angles and distances and the CONSERT radio science experiment provided a rough idea where on the comet Philae had made its final touchdown. A number of potential candidate objects were identified in lower resolution images taken from larger distances.

While most candidates could be discarded, one particular target stood out and a favorable imaging geometry was set up to permit OSIRIS to capture frames at 5-centimeter resolution. These images are sufficient to reveal the characteristic features of the 1-meter sized Philae lander.

The pictures of Philae are of great value to the science team as they now have the ground-truth information that was missing when initially interpreting the data captured by Philae during its brief operation. It is also important for the CONSERT experiment that needs a precise position of Philae to understand the measurements of the comet’s interior.

For Rosetta, the big finale of its 12.5-year mission is right around the corner as teams prepare the spacecraft to be sent on one last dive to descend to the comet’s surface. During this multi-hour approach, Rosetta will capture unprecedented measurements in the direct vicinity of the cometary surface. This unique mission conclusion is expected to deliver a wealth of data including ultra-close up images of the surface.

Rosetta will conclude its mission on September 30 and communications will cease once the orbiter-turned-lander reaches the surface, putting the exclamation mark behind a historic mission of discovery.

The setup for the September 30 maneuver began back in August and Rosetta will be set on its final descent toward the Ma’at region around 12 hours before impact which is expected to occur at a velocity of 50 centimeters per second. After contact, Rosetta will automatically switch off its attitude control system and instruments; communications will stop when the High-Gain Antenna no-longer points to Earth.

Data captured in the final stages of the descent from 20 Kilometers are hoped to reveal the secrets of the interior structure of the comet.

Rosetta accompanied comet 67P during a large stretch of its close orbit around the sun, studying how the surface and gas plumes changed over the course of the comet’s close encounter with the sun in 2015.