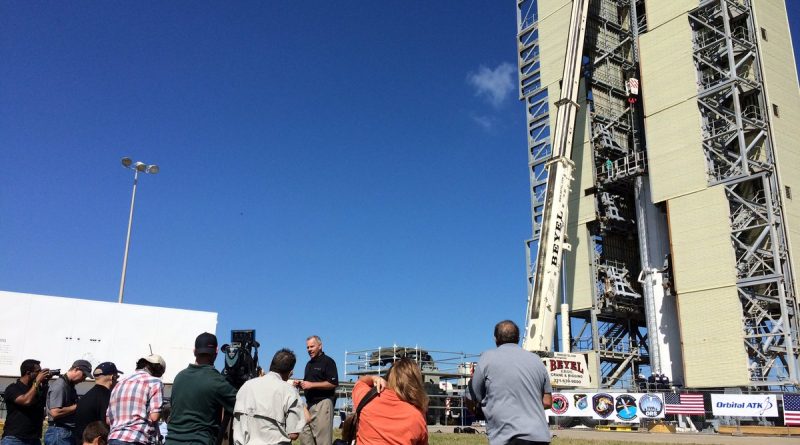 Orbital ATK has begun the process of reviving Cape Canaveral’s Launch Complex 46 by stacking three Peacekeeper missile stages to demonstrate techniques for the assembly of the first Minotaur IV rocket to launch from the Cape this summer with an experimental satellite for the U.S. Air Force.

Launch Complex 46 was established in the 1980s on the easternmost tip of Cape Canaveral to be used for test launches of the Trident II missile, a two-year testing program that saw 19 Trident D-5 launches between January 1987 and January 1989. Following completion of Trident testing, the pad was deactivated until, in 1997, Space Florida assumed control of the site for commercial space operations.

Lockheed Martin’s Athena-II rocket lifted off from LC-46 in January 1998 with NASA’s Lunar Prospector mission to explore the composition of the lunar surface, polar ice deposits and the Moon’s magnetic and gravitational fields. In January 1999, an Athena I blasted off from LC-46 with the FORMOSAT-1 Earth-observation satellite from Taiwan.


After a brief tenure hosting Athena, LC-46 again sat dormant for a decade. The 45th Space Wing issued a property license to Space Florida in 2010 for LC-36 and 46 and the FAA provided clearance for commercial operation of the complex, though users for the facility were nowhere to be found.

A series of communications infrastructure upgrades were implemented at LC-46 between 2010 and 2014 to outfit the complex for operations.

In 2014, NASA selected SLC-46 for a critical ascent abort involving the Orion spacecraft currently planned in 2018 in the run-up to Orion’s first crewed mission in the 2021-23 time frame. In July 2015, the U.S. Air Force announced a $23.6 million contract awarded to Orbital ATK for the launch of the ORS-5 mission from Cape Canaveral’s LC-46 utilizing a modified Minotaur IV rocket.

ORS-5, operated by the Pentagon’s Operationally Responsive Space Office, aims to launch a small spacecraft called SensorSat into a Low Earth Orbit above the equator from where the satellite’s sensor payload can look straight up to monitor satellites and debris pieces inhabiting the Geostationary Belt, located 36,000km over the equator.

The target equatorial orbit for this mission and launch vehicle can not be reached from Minotaur’s launch pad at the Wallops Flight Facility, prompting the decision to move the mission to Cape Canaveral.

SensorSat, weighing in at around 100 Kilograms, acts as both a technology demonstration for Space Situational Awareness Sensors as well as a gap-filler for the Air Force’s Space-Based Space Surveillance System (SBSS)s currently missing funding for a successor mission which may not come until the early 2020s.

The SBSS-1 satellite, launched back in 2010, is due to retire later this year and there is strong desire for continuous Space Situational Awareness Data collection, also in light of efforts by other countries posting maneuverable satellites in GEO that the U.S. would like to keep an eye on at all times.

SensorSat will likely operate from a circular orbit at 600 Kilometers and continuously scan the GEO Belt where the world’s communications and weather satellites reside as well as a plethora of military satellites for communications and in-space eavesdropping. MIT-developed technology demonstrated by SensorSat will feed into development of the SBSS follow-on program currently aiming for deployment in 2021.

In charge of the launch of SensorSat will be a modified version of the Minotaur IV that normally uses three decommissioned Peacekeeper missile stages topped by an Orbital ATK-built Orion 38 or Star 48 upper stage. For the ORS-5 mission, Minotaur IV flies with five stages, employing an additional Orion 38 to accomplish the plane change required to put the satellite into a perfect equatorial orbit with zero inclination.

To date, Minotaur IV has flown four successful missions from launch pads at Vandenberg Air Force Base in California and the Kodiak Launch Complex in Alaska. The Minotaur family, sharing a number of common components, has flown 25 times since 2000 with a perfect success record.

To prepare for Cape Canaveral’s first Minotaur launch, Orbital ATK elected to demonstrate the stacking of the three lower stages of the rocket in a dry run exercise with inert boosters. The operation was completed on Sunday with a photo opportunity for local media before the stages are de-stacked this week.

The real Minotaur IV rocket will begin its assembly process in June in preparation for a nighttime liftoff in the early hours of July 15. Minotaur IV will blast off with a whopping thrust of 225 metric-ton force and depart the Cape to the south east, firing the SR-118, 119 and 120 rocket stages in close succession before the two Orion 38 upper stages will be called upon to boost the vehicle’s speed to orbital velocity and then reduce the inclination of the orbit to zero when passing over the equator. The entire trip to orbit will take approximately half an hour.