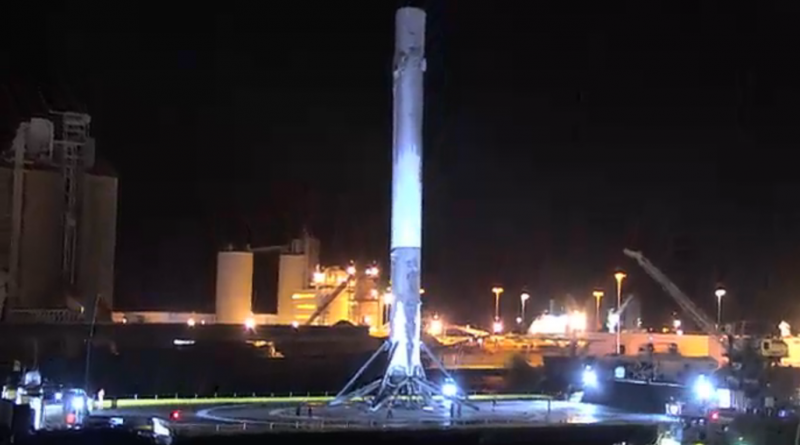 The Falcon 9 first stage that successfully landed on SpaceX’s Autonomous Spaceport Drone Ship last week pulled into port on Tuesday. Making its first recovery at sea, SpaceX has big plans for the booster with ten static test fires outlined for the stage ahead of a re-flight of the vehicle on an operational flight in the coming months, marking another reusability milestone for the company.

Falcon 9 lifted off from SLC-40 at Cape Canaveral on Friday and successfully dispatched the Dragon SpX-8 spacecraft to orbit for a rendezvous with the International Space Station. Dragon linked up with the Space Station on Sunday, being captured by the Station’s Robotic Arm to mark the return of the SpaceX Dragon after a long stand-down following the 2015 Falcon 9 launch failure.

While Dragon sailed into orbit atop the rocket’s second stage, the first stage embarked on its return to Earth, homing in for a landing at sea on the Drone Ship ‘Of Course I Still Love You’. Returning from the edge of space, the vehicle had to slow down from a speed of five-and-a-half times the speed of sound and precisely target the tiny landing platform stationed 300 Kilometers from the launch site.


SpaceX had gained more and more confidence over recent attempts of landing the large booster on the drone ship, having made four attempts that all came very close to sticking the landing but ultimately failed due to last-minute issues. With a successful land-landing in December, Falcon 9 had already secured its place in space history, but SpaceX aimed at mastering the more challenging landing on the drone ship that will be a firm part of future missions when lifting heavy satellites to high-energy orbits which only leave a limited propellant surplus for the powered landing.

Around half of future SpaceX missions will use the ASDS for booster recovery and SpaceX aims to perfect the landing sequence for those high-energy missions as soon as possible. Although the SpX-8 mission had sufficient performance for a return to land, SpaceX decided to take another shot at landing at sea in a mission with healthy margins to gather additional data needed to successfully land on more challenging missions.

Going through a pair of propulsive maneuvers using a subset of its nine Merlin 1D engines, the booster set up for its entry into the atmosphere. With four actuated grid fins, Falcon 9 guided itself to the drone ship to fire up its center engine and come in for the landing. Leaning into the wind, the booster arced towards the ship and deployed its landing legs a few seconds before touchdown, eight minutes and 35 seconds after lifting off.

The recovered booster was safed remotely, shutting down several systems and venting its tanks before teams were able to access the drone ship to secure the booster. It was initially reported that the landing legs would be secured with shoes welded to the deck, but imagery showed structures tying the vehicle hold-down system to the deck.

Once in a safe configuration, the Drone Ship, its tug and support vessel started a long trip back to port, challenged by sea states and windy conditions. Also negotiating around cruise ship traffic in and out of Port Canaveral, SpaceX set up an arrival in the early hours on Tuesday.

For the first time entering port with a flown Falcon 9 first stage on deck, the ASDS was widely watched by observers who awaited its arrival on location and hundreds of viewers of the Port Canaveral webcam feed. Once the drone ship was docked, no time was wasted and operations to move the stage got underway in the early morning hours.

A crane, already in place before the ship’s arrival, was carefully positioned to attach a loading head fixture to the stage separation system on the interstage adapter to be able to lift the booster off the barge. The hold-downs on the deck were removed and the stage was slowly lifted from the ASDS over to a stand featuring attachment systems interfacing with the launch hold-downs on the stage.

Next, teams will fold up the landing legs and rotate the booster to a horizontal position for transfer to the Kennedy Space Center. The stage will likely take residence in the Horizontal Integration Facility at Launch Pad 39A to undergo inspections and any refurbishment work that needs to be done.

A rigorous testing plan has been outlined by Elon Musk, SpaceX CEO and Chief Designer, with up to ten static fire tests in a row to re-qualify the stage for an operational mission. While the stage returned to Landing Zone 1 in December will be put on display at SpaceX Headquarters in California, this particular booster is set for re-use, potentially in an operational mission.

The test firings of the booster may be carried out at Pad 39A, that recently finished construction to support future Falcon 9 and Falcon Heavy launches. This would provide SpaceX with the additional opportunity of testing out the pad systems as part of the static fire tests to set up for the first 39A launch later in the year.

Elon Musk noted a re-flight of the stage could occur as early as May or June, but no payload for this mission has been revealed yet. Satellite operator SES said earlier that the company was interested in launching satellites on a used Falcon 9 rocket. A pair of SES satellites is on the manifest for liftoff later in the year, but may not be ready for a launch in June.

SpaceX will offer the first re-flight opportunities at a 30% discount of the current price for a brand new Falcon 9.

Having completed landings on land and at sea, SpaceX will continue refining the landing sequence and the post-landing processing flow, ultimately aiming at a full and rapid reusability with minimal refurbishment efforts between successive flights of the same booster. Musk noted that Falcon 9 could be used for 20 flights with minimal refurbishment efforts and up to 100 missions with regular maintenance.

SpaceX expects it will take years to achieve a smooth and efficient reuse of first stages and some failures along the way are expected. Though routine re-use of rocket stages is still a ways down the road, SpaceX is aiming high and progress made in recent milestones highlights the company’s commitment to making access to space affordable.