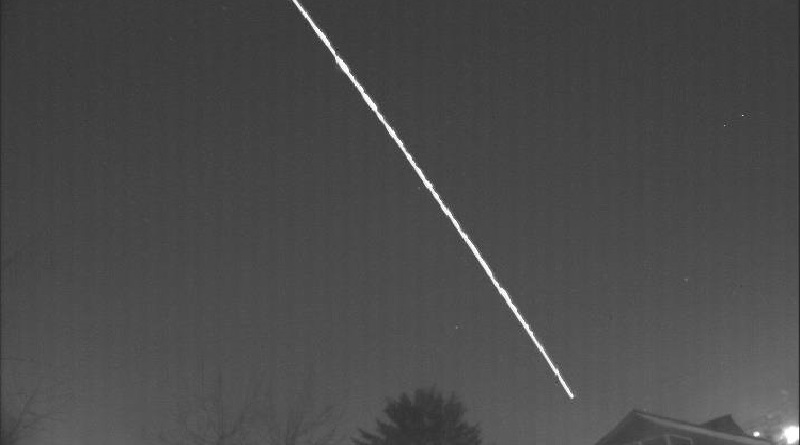 A Ukrainian Group of meteor observers captured the re-entry of a piece of Russian rocket debris as it re-entered back on January 3, 2016. The object was a large piece of debris from the second stage of a Kosmos 3M rocket that launched the Kosmos 1763 military communications satellite in July 1986.

The two-stage Kosmos 3M rocket injected the Strela-2M No. 39 satellite into an orbit around 800 Kilometers in altitude and in the process shed a number of debris as is typical for this launch vehicle configuration. Over the years, the debris consistently lost altitude due to drag in the very upper reaches of Earth’s atmosphere. Taking into account the radar cross section of the debris, the Joint Space Operations Center classified it as a large object and its final days in orbit were tracked closely as the debris approached its final fiery plunge.


The Joint Space Operations Center issued a re-entry prediction of January 3, 2016 at 19:28 UTC with a window of uncertainty of +/-24 Minutes indicating that this re-entry was not tracked in real time with infrared-sensing satellites in which case the uncertainty would be no more than a minute or two. Observations of a spacecraft re-entry were reported by the Astropolis Amateur Astronomers’ Club showing re-entry taking place around 18:40 UTC, well outside the re-entry window issued by the Joint Space Operations Center. There are no other candidates and the ground track of the SL-8 debris is in good agreement with this observation leaving no doubt on the origin of the object.

The Sky Camera operated by the group captured the re-entry of the object, showing it moving through an altitude of 75 Kilometers at a speed of 6.8 Kilometers per second on a trek taking it from south-west to north-east. The visible portion of the re-entry lasted well over 30 seconds and the re-entering object showed a prominent debris and smoke trail as it disintegrated in the dense layers of the atmosphere.