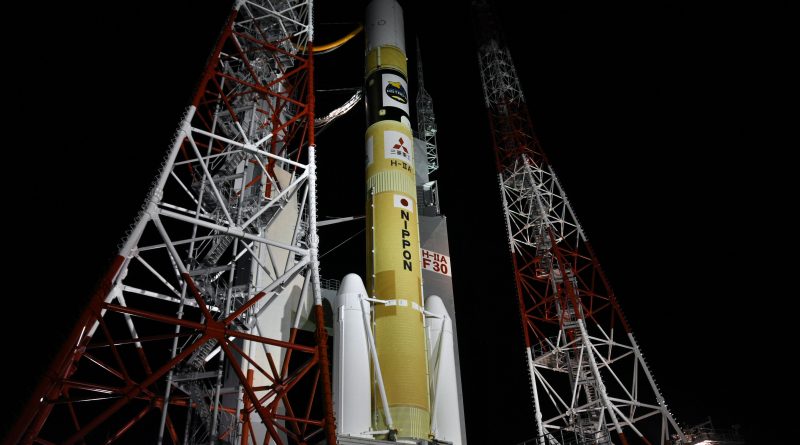 Japan’s Quasi-Zenith Satellite System, designed to improve the availability & accuracy of satellite navigation over the island nation, will reach full strength on Monday when the fourth and last planned QZSS satellite takes flight atop an H-IIA rocket blasting off from the picturesque Tanegashima Space Center.

Michibiki-4 will complete the four-satellite constellation expected to deliver fully operational navigation augmentation starting next year with a future enhancement coming via the launch of additional satellites in the next decade.

The 53-meter tall H-IIA rocket is targeting an instantaneous liftoff time at 22:01:37 UTC on Monday, 7:01 a.m. local time, thundering off from its sea-side launch pad to dispatch the 4,000-Kilogram QZS-4 satellite into a highly elliptical transfer orbit. After separating from the rocket, QZS-4 will take a precise position in a specialized orbit, operating in a three-shift pattern alongside two other QZSS craft with each at high elevation over the Japanese Islands eight hours per day.


2017 has been a busy year for Japan’s QZSS program, aiming to have all satellites in orbit by the end of the year for final operational checkouts before declaring the system open for business in mid-2018. QZS-2 lifted off on June 1st and joined the first satellite in what is known as a Tundra orbit that offers optimized coverage over Japan.

QZS-1 has been in orbit since September 2010 to serve as the program’s pathfinder mission, demonstrating the twofold navigation enhancement provided by the system. QZS-3, the heaviest in the group, took flight on August 19 and is the lone geostationary member of the constellation, hovering in a constant position in the sky to add a navigation beacon for the entire Asia-Pacific Region.

Monday’s launch of the last member of the baseline constellation marks the culmination of 15 years of work. QZSS was initiated in 2002 with the overall objective of increasing the availability of GPS navigation services, particularly in Japan’s urban canyons where tall buildings block out the signals of all GPS satellites that are not particularly high in the sky, potentially causing interruptions in service if less than four satellites are visible.


To accomplish this, QZSS was initially designed as a three-satellite constellation that allows one satellite to be at very high elevation at any given time, essentially adding a GPS-compatible satellite to increase the odds of sufficient satellites being visible for users. QZS-3, as the GEO member of the constellation, was added later to deliver augmentation over the broader Asia-Pacific Region, aiding air traffic control, marine services and scientific applications.

The QZSS satellites deliver two types of signals – GPS-compatible navigation signals that can be processed by any GPS receiver as a standard member of the constellation, and GPS augmentation messages that require specialized receivers to more accurately calculate a user’s position.

The GPS augmentation approach employed by QZSS is similar to that of the U.S. Wide Area Augmentation System, utilizing a number of ground stations to measure variability in GPS signals – caused by clock errors on the satellites or signal distortion in Earth’s ionosphere. Correction messages are generated on the ground and immediately sent to the QZSS satellites which relay them in real-time for use by augmentation-enabled receivers to improve location accuracy to one meter or better.

The QZS-1 satellite served as a critical demonstrator for the program, undergoing extensive signals characterization and testing after being lifted into orbit. Studies showed that GPS accuracy was improved by a factor of 2.5 through the augmentation code transmitted by the satellite. These results prompted JAXA to order three DS-2000-based satellites from Mitsubishi Electric in 2013 for a total of $526 million in order to establish the operational QZSS constellation for 24/7 augmentation services.

A carbon copy of QZS-2, the Michibiki-4 satellites stands 6.2 meters tall and weighs in at four metric tons, comprising a 1,180-Kilogram satellite platform, 370kg navigation payload and 2,450kg of maneuvering propellant. At the heart of the satellite sits a pair of redundant Rubidium Atomic Clocks that provide the ultra-stable timing needed in the generation of regular GPS navigation messages. Japan received clearance from the U.S. in 2006 to use the GPS navigation bands as well as the L1-SAIF augmentation signal architecture.


Called up for the launch of QZS-4 will be Japan’s trusted H-IIA rocket, making its fifth flight of the year and breaking its previous best mark for the number of missions in a calendar year. In the H-IIA 202 configuration used on Monday, the vehicle consists of a two-stage stack four meters in diameter plus a pair of SRB-A3 Solid Rocket Boosters to do most of the heavy-lifting in the first minute and a half of the flight. H-IIA 202 has a launch mass of 285 metric tons and can lift 4,100 Kilograms into a Geostationary Transfer Orbit.

H-IIA’s lengthy launch countdown will begin with the vehicle’s rollout to Launch Pad 1 around 8 UTC on Monday. Covering its first 500 meters toward orbit, H-IIA will be centered on the pad and connected to various commodity lines before undergoing power-up for an initial set of checkouts while teams close out the facility.

Propellant loading is expected to pick up seven hours and 45 minutes before launch to fill the two-stage rocket with 120 metric tons of -183°C Liquid Oxygen and -253°C Liquid Hydrogen. Once at flight level, the tanks will enter stable replenish for another pre-flight testing campaign that will set the stage for the automated countdown sequence.

Computers will be handed control of the count at X-4.5 minutes to take H-IIA through the final preparatory steps, notably the pressurization of its four tanks, the transition to internal power and the activation of the Flight Control System. H-IIA will begin breathing fire at X-5.2 seconds when the LE-7A engine will start its ignition sequence to soar to a thrust of nearly 100 metric ton force under close watch by the rocket’s flight computers.

Upon completion of engine monitoring, when clocks strike zero, H-IIA will fire up the twin boosters and leap off the pad with a total thrust of 600 metric-ton-force. H-IIA will climb vertically for only a handful of seconds before initiating its pitch and roll program to begin racing downrange across the Pacific Ocean.

Unlike a typical geostationary delivery that aims to reduce orbital inclination, H-IIA will be targeting a higher inclination than its launch site as the QZS constellation satellites operate in an orbit inclined 40 to 44 degrees to either side of the equator.

The SRB-A3 boosters feature a special configuration with a shorter burn time, but higher thrust – optimized for a high-energy mission profile. Each delivers some 255 metric-ton-force of thrust over the course of a 98-second burn to help accelerate H-IIA to a speed of 1.5 Kilometers per second. Separation of the boosters – triggered by their declining chamber pressures – will be commanded one minute and 48 seconds into the flight when the vehicle will be 54 Kilometers in altitude.

With the 15-meter boosters swinging outward along their thrust struts, H-IIA will from then on rely on its LE-7A engine alone, burning 260 Kilograms of cryogenics per second to deliver 109,300-Kilogram force of thrust when heading into the upper reaches of Earth’s atmosphere. The protective payload fairing will split open and drop away four minutes and ten seconds into the flight when H-IIA crosses 151 Kilometers in altitude where aerodynamic forces are no longer a danger to the delicate satellite structure.

Per the nominal mission plan, the first stage will shut down six minutes and 38 seconds into the flight, having boosted the vehicle to a speed of 5.2 Kilometers per second. Eight seconds later, the separation of the 37-meter long core stage will be commanded through loaded springs, expected some 239 Kilometers in altitude.

The second stage will fire up its LE-5B engine six seconds after staging, generating 13,970kgf of thrust for a burn of five minutes and 42 seconds to lift the stack into a preliminary parking orbit. At the conclusion of the first propulsive flight phase, H-IIA will enter a coast phase of exactly 12 minutes to continue on its south-easterly trek and set up the proper injection conditions for the second upper stage burn.

Re-start of the LE-5B is expected 24 minutes and 34 seconds into the mission on a burn of precisely three minutes, tasked with raising the vehicle’s speed by 2.5 Kilometers per second. H-IIA is aiming for a Tundra Transfer Orbit of 250 by 36,140 Kilometers at an inclination of 31.9 degrees from where it will be up to the satellite to maneuver into its operational slot between the first two QZS craft, flying in an orbit of 32,600 by 38,900 Kilometers with the high point over Japan. This orbital setup allows each satellite to dwell over the Japanese territory for a large part of its orbit.

Loaded springs will send QZS-4 on its way 28 minutes and 24 seconds after launch to check off H-IIA’s 36th mission and also mark the completion of QZSS deployment after a fast-paced four months of activities.