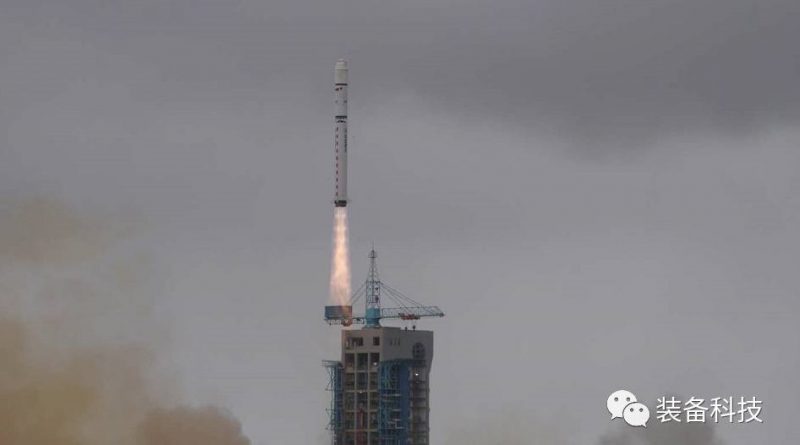 Monday’s launch marked the Return to Flight for the Long March 2D rocket after a partial failure on December 28, 2016 that left a pair of SuperView Earth-Imaging Satellites in a lower-than-planned-orbit due to an apparent underperformance of the vehicle’s first stage.


The two satellites managed to reach their operational orbit on their own but the trouble did not stop for the Chinese as two more issues arose in 2017, one with the Long March 3B workhorse that failed to reach the target orbit when lifting Zhongxing-9A and the other with the new Long March 5 that fell short of orbit in July on its second test flight due to an engine failure on its cryogenic core stage.

As a result of these partial failures and the high-profile failure of Long March 5, China had to slow down its launch pace considerably, though the typical end-of-year push is likely still to come.

Liftoff from Pad 603 at Jiuquan’s Complex 43 occurred at precisely 4:13:14.451 UTC and was broadcast live on Venezuelan Television with live updates provided by the Venezuelan President Nicolas Maduro himself. Video of the mission showed the Long March 2D going through staging two and a half minutes into the flight with the second stage taking over for a main engine burn of just shy of three minutes followed by continued firing of the vernier engine for another seven minutes to accomplish the circular orbit injection. VRSS-2 sailed off 14 minutes after launch and deployed its power-generating solar arrays just one minute later, confirming the success of the launch.


VRSS-2 is the second Venezuelan Remote Sensing Satellite operated as the country’s second high-resolution Earth-imaging craft. The mission is a follow-on to the VRSS-1 satellite, ready to take over at that satellite’s scheduled end of life in 2017. Like its predecessor, VRSS-2 was contracted to the China Great Wall Industry Corporation for manufacture and launch of the satellite that will be named after Venezuelan independence leader Antonio José de Sucre.

The VRSS program has the primary goal of providing reliable access to Earth remote sensing data for the Venezuelan government for use in a number of areas including environmental monitoring, resource management, urban planning, monitoring of illegal drug and mining activities, other national defence applications and prevention/relief in case of natural disasters. In charge of operating the VRSS satellites is the Space Agency of Venezuela (ABAE), a division of the Ministry of People’s Power for Science, Technology and Intermediate Industries. The program also included extensive technology and knowledge transfer from China with over 50 professionals being trained in the conduct of a space mission at Chinese spacecraft builder CAST.

The formal contract signing for VRSS-2 was announced in July 2014 with CGWIC in charge of coordinating the production, testing and launch of the satellite under Chinese supervision, a similar scheme had been chosen for the successful VRSS-1 mission. The 880-Kilogram VRSS-1 satellite was launched into orbit on September 29, 2012 atop a Long March 2D rocket for a planned mission life of five years.

Based on the CAST-2000 satellite platform, VRSS-1 hosted a pair of instruments – the 135-Kilogram PMC (PAN and Multispectral Camera) capable of collecting black-and-white imagery at 2.5-meter resolution and four-channel multi-spectral imagery at a ground resolution of 10 meters across a swath of 57 Kilometers; and the two-camera WMC (Wide-swath Multispectral Camera) for wide-swath imaging across a 370-Kilometer ground area in four spectral channels at a maximum ground resolution of 16 meters.

The VRSS-2 satellite hosts a much-improved payload, creating a heavier spacecraft with a launch mass of 942 Kilograms, also utilizing the CAST-2000 minisatellite platform. Per the VRSS-2 contract, China Great Wall Industry Corporation will perform an in-orbit delivery, managing all production, testing and launch operations while the craft is still on the ground and working with subcontractors to put the satellite through in-orbit testing before turning it over to Venezuela.


The CAST-2000 small satellite platform is designed to accommodate a variety of high-performance payloads, providing flexibility to host different payloads including remote sensing, communications and navigation payloads. The platform itself has a launch mass of 200 to 400 Kilograms and can host payloads up to 600 Kilograms, typically measuring 1.5 by 1.7 by 1.9 meters in size when packaged for launch. Two deployable solar arrays deliver 900 Watts of electrical power and a three-axis stabilization system offers precise pointing needed for accurate imaging of targets with off-nadir maneuvering possible to 35 degrees to either side to broaden the craft’s field of regard.

The CAST-2000 satellite employs advanced composite structures, the solar panels measure 1.1 by 0.85 meters in size each and communications are provided in S-Band for command and telemetry up/downlink and a dual X-Band system is used for transmission of imagery at data rates approaching 450 Mbit/s.

VRSS-2 operates from a sun-synchronous orbit with a mean altitude of 645 Kilometers.