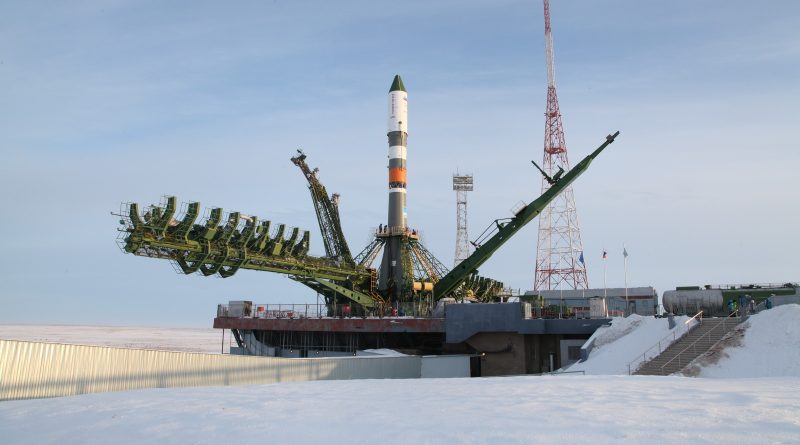 Winter remained with a firm grip on Kazakhstan’s Baikonur Cosmodrome on Friday when a Soyuz 2-1A emerged from its assembly hall and rolled to its launch pad for a Sunday liftoff with the Progress MS-08 cargo spacecraft on an expedited, two-orbit rendezvous with the International Space Station.

The first of three planned Progress missions of 2018 is targeting liftoff at 8:58 UTC and the Soyuz 2-1A rocket will be in operation for less than nine minutes to send the seven-metric-ton-spacecraft on its way toward a 12:24 UTC docking with the Station’s Zvezda module.

If successful, Progress MS-08 will take the record for the fastest rendezvous with the International Space Station, cutting in half the current travel time for crewed Soyuz spacecraft that employ a four-orbit rendezvous scheme taking around six hours. The new two-orbit flight profile was originally planned to debut on the Progress MS-07 mission last October but had to be deferred when its Soyuz rocket encountered a rare ignition abort and had to move to its backup launch date – knocking the precise orbital geometry required for the fast approach out of place and reverting the mission to the standard two-day flight profile.


Roscosmos said on Friday that preparations are on track for liftoff on Sunday, at precisely 8:58:44 UTC when the International Space Station will be 260 Kilometers south-west of the Site 31/6 launch pad, set to overtake the ascending Soyuz rocket just over half a minute after it takes flight so that Progress can be injected into a position right behind and around 200 Kilometers below the Station.

Russia began implementing expedited rendezvous techniques in 2012 when the four-orbit flight profile debuted on the Progress cargo spacecraft for a series of tests before becoming the preferred method for crewed Soyuz missions in 2013 to ferry crews to their destination in space on the same day of launch to avoid them having to spend two nights in the confines of the Soyuz spacecraft.


This four-orbit flight profile comprises a pair of pre-programmed orbit raising maneuvers on the spacecraft’s first lap around the planet followed by another pair of main engine burns on the second lap to correct for launch vehicle injection errors before the Automated Rendezvous Sequence starts on the third orbit to bring the spacecraft to the vicinity of ISS for a flyaround and straight-in approach to docking.

Further speeding up the rendezvous requires two critical elements: a) a more accurate launch vehicle so that dispersions or errors at orbital injection are so small corrective maneuvers can be eliminated (thus cutting the orbit #2 maneuvers) and b) a much stricter setup of orbital geometry or the development of a flight profile solution that allows the spacecraft to deal with a greater range of starting conditions. Additionally, Russian flight teams decided to keep the 100-minute Automated Rendezvous Sequence unchanged in order not to tamper with a procedure that has proven very effective and reliable over the years.

Soyuz 2-1A, utilizing the modern digital guidance system, provides a much higher precision in orbital injection than its Soyuz U/FG predecessors and allows the Orbit #2 maneuvers to be cut to yield a three-orbit flight profile. However, the goal of creating a two-orbit rendezvous necessitated additional modification of the flight profile.

Achieving the two-orbit link-up requires a very precise orbital geometry to be in place with respect to the position of ISS in its orbit when the orbital plane passes over the Baikonur Cosmodrome so that Progress can be injected at a very small phase angle to ISS (the initial angle separating the target and chaser spacecraft in their orbital plane).

Russian trajectory experts developed a solution that allowed some leeway in the phase angle requirements by combining phasing and plane-change maneuvers into a Quasi Coplanar Insertion Scheme in which a slight planar misalignment is acceptable to permit launching at the optimized phase angle and making up during flight by setting up the most fuel-efficient planar transfer through adjusting the orbital inclination of the chaser at launch.

The intricacies of Russia’s Quasi Coplanar Insertion & Rendezvous are explained in detail here.


Should anything be amiss during Sunday’s rendezvous attempt, Mission Controllers in Moscow have an option to back out of the express rendezvous and revert to a two-day trajectory per the tried-and-true procedure that builds on several decades of experience. As with the introduction of the four-orbit flight profile, Progress will again be the pathfinder for the faster two-orbit trajectory and only once it is well established will it be implemented for crewed missions, likely starting after the transition of Soyuz MS missions to the upgraded Soyuz 2-1A rocket in 2019.

The primary purpose of the Progress MS-08 mission is keeping up a steady chain of supplies to the International Space Station and its six crew members. It is the first of three planned Progress missions to ISS this year, though schedules remain fluid surrounding the departure of the Pirs module (with the help of a Progress craft) and the arrival of the Nauka Multipurpose Laboratory Module.

Progress MS-08 is also hosting a technology demonstration experiment called Фазопереход “Phase Transition”. This experiment deploys a series of new thermal control system components to the operational space environment to test their performance in a realistic flight scenario. Operated by TSNIIMASH, the experiment primarily looks into the efficiency of new heat pipes and radiators that rely on the phase transition of a working fluid to efficiently transport heat from electronic components to the radiator.