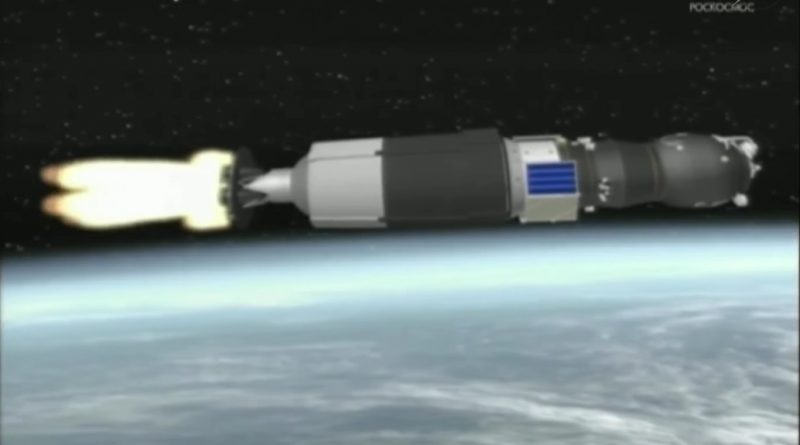 One week has passed since the failure of Russia’s Soyuz U Rocket transporting the Progress MS-04 cargo craft, but a clear version of what caused the mishap two and a half-minutes prior to the vehicle’s planned arrival in orbit has yet to emerge.

The Soyuz U rocket – operating its second-to-last mission until retirement – blasted off from the Baikonur Cosmodrome at 14:51:52 UTC on December 1, 2016 on what was expected to be a standard eight-minute and 49-second climb into Low Earth Orbit as flown hundreds of times by the venerable launch vehicle over its 43-year career.

Lighting up the night over the historic launch site, Soyuz swung to a north-easterly departure path to dispatch the Progress MS-04 resupply craft into the orbital plane of the International Space Station for a two-day rendezvous. Operation of the rocket’s four liquid-fueled boosters and the core stage was nominal before the Block I third stage took over at T+4 minutes and 47 seconds for the final push into orbit. According to Roscosmos, Soyuz ran into trouble during the firing of the third stage with telemetry from the vehicle ceasing 383 seconds into the flight.

At the time of the mishap, the ascending rocket was 190 Kilometers in altitude, around 900 Kilometers downrange from the Baikonur Cosmodrome and traveling at a speed of nearly five Kilometers per second. After the in-flight anomaly, the vehicles continued on a sub-orbital path until re-entering the atmosphere with surviving fragments impacting around 2,250 Kilometers from the launch site.

Within hours of the accident, Russian media outlets reported that debris related to the Progress MS-04 mission were discovered in a remote area 60 to 120 Kilometers west of the town of Kyzyl. According to reports, helicopters were employed to search for debris and space officials secured located debris pieces as weather conditions permitted. A photo provided by emergency services of of the Republic of Tuva shows a 90-centimeter spherical tank attributed to the Progress MS-04 mission, found in the Ulug-Khem district.

An interdepartmental commission was formed to investigate the exact circumstances of the loss of the Progress MS-04 mission, led by Roscosmos Head Igor Komarov and his Deputy Aleksandr Ivanov. A preliminary report from the commission is expected as early as December 20.

In the hours and days after the accident, Russian media outlets – citing anonymous sources within the space industry – presented a variety of scenarios as potential causes for the failure, ranging from a failure of the RD-0110 engine of the Block I third stage to a cause related to the Progress MS-04 spacecraft instead of the Soyuz rocket.

Previous Russian failures have shown that “industry sources” often provide hypotheses that are presented as fact-based evidence by media outlets, leading to a game of finger-pointing between sources representing the launch vehicle and spacecraft manufacturers.

In a statement issued on December 7, Roscosmos shut down the wild speculation in Russian media, commenting that versions presented up to this point can not be considered to reflect reality.

Sources seem to agree that trouble struck the Progress MS-04 mission 382.3 seconds into the flight when, according to RIA Novosti, telemetry from the launch vehicle was suddenly lost after a seemingly nominal ascent up to that point.

Initially, there was speculation Soyuz issued an emergency engine cutoff command at the time telemetry was lost. This command, known by the acronym AVD, is only issued by the Flight Control System when the destruction of the launch vehicle is imminent, either due to an excessive deviation of the vehicle’s orientation from the normal attitude profile or a loss of pressure in one or more of the engine’s four combustion chambers.

However, more recent information indicates the propulsion system was working through T+382.374 seconds.

According to other reports on the same forum, telemetry from the Progress MS-04 spacecraft was received for up to four minutes after the time of the anomaly – a strong indication that the cargo vehicle separated from the third stage after propulsive flight ended prematurely. This is supported by the Russian Defense Forces which reported tracking a pair of objects around 14:57 UTC, likely corresponding to the seven-metric ton Progress spacecraft and Soyuz U upper stage.

Separation of the Progress would also explain reports cited in real time by NASA, claiming that Progress MS-04 had deployed its navigation antennas and unlocked its two power-generating Solar Arrays for deployment. Deployment events are triggered based on a positive indication of separation from the launch vehicle and executed on a pre-programmed timeline, regardless of the orbital insertion parameters.

There is conflicting information on the condition of Progress MS-04 after its separation from the launch vehicle. Unconfirmed reports say Progress telemetry showed declining pressures in the propulsion and thermal regulation systems of the spacecraft which could be caused by an anomaly on the vehicle itself or as a result of damage received at or after separation from the Soyuz rocket.

Given the data available up to this point, it is increasingly likely that the failure mechanism occurring onboard the Block I / Progress complex was extremely fast, raising the question whether enough clues are available in the telemetry data collected at the point of failure to fully explain the chain of events causing the loss of the mission.

Progress MS-04 was loaded with 2,442 Kilograms of cargo for the International Space Station comprising food, fuel and supplies for the six crew members onboard the orbiting laboratory. Aboard the spacecraft was an experimental water recycling system, a plant-growth facility to study plant physiology in microgravity, and the first in Russia’s next generation of space suits intended to enhance spacewalk capabilities for Russian crew members.

The loss of Progress MS-04, while unfortunate, will not cause any immediate effect for the crew aboard ISS. Supplies stockpiled on ISS will last until June 2017 if no new cargo arrives, however, plenty of resupply missions are inbound before then, starting with the Japanese HTV-6 that is set for liftoff on Friday to deliver nearly six metric tons of cargo to ISS.

With no root cause established, Roscosmos is unlikely to announce any changes to planned Soyuz launch operations. The next planned flight of the Soyuz fleet is on the books for January 28, 2017 with a the Kanopus-V IK satellite and a group of secondary payloads – employing the Soyuz 2-1A which uses a modified version of Block I that hosts an improved structure and avionics system but retains a number of elements from the original Block I such as the RD-0110 engine.

The next Progress mission to the Space Station was scheduled for February 2nd and was to mark the last flight of the Soyuz U rocket that amassed a record of over 780 missions over a remarkable career unparalleled by any other orbital launch system.

Whether the planned Soyuz launch dates can stand will become clear when the initial report is provided by the Russian State Commission, establishing a forward path if a definitive cause for the recent failure can be pin-pointed.