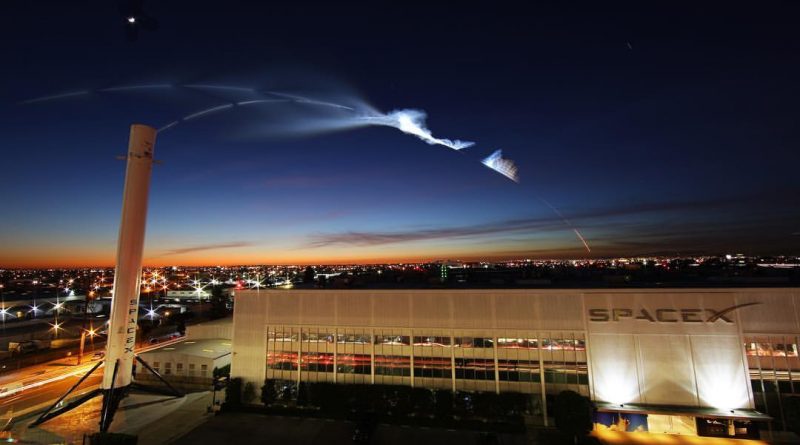 Residents in Southern California were given a remarkable show in the late afternoon skies on Friday when SpaceX’s Falcon 9 rocket soared toward orbit with the fourth group of Iridium-NEXT communications satellites, leaving a vast trail in the sky with multiple objects maneuvering in the late twilight as the rocket’s upper stage pushed toward orbit while the first stage booster and payload fairing halves maneuvered after dropping away from the rocket.

Twilight launches usually make for spectacular viewing as observers on the ground are already immersed in the dark of night while the ascending rocket rises into sunlight shortly after liftoff. Particularly spectacular viewing is provided by SpaceX launches with multiple components maneuvering through the sky as they follow their missions – either heading up toward orbit or descending toward recovery, each with their own plumes of brightly illuminated exhaust gases.

Police received hundreds of calls from the Los Angeles area as concerned citizens – unaware of SpaceX’s year-closing mission – alerted then of an incoming UFO or ballistic missile. The launch was visible from a wide area in southern California and Arizona.

Falcon 9 lifted off from SLC-4E at California’s Vandenberg Air Force Base at 5:27:34 p.m. local time, half an hour after sunset with the sun 8° below the horizon for observers in Los Angeles, located around 230 Kilometers south east of the launch pad. Quickly climbing in altitude, Falcon 9 reached daylight again, illuminating the 70-meter tall launch vehicle and the plume of exhaust gas from its nine Merlin 1D engines that expelled 2,450kg of combustion products per second.

Stage separation two minutes and 36 seconds into the flight set in motion the second act in the night’s high-altitude show as the second stage fired up its single MVac engine to push on toward orbit while the previously-flown first stage immediately entered a flip maneuver and re-lit a subset of its engines in staggered fashion for a partial boostback maneuver.

Because the first stage lit up on its boostback within ten seconds of staging, the plumes from the MVac engine and Stage 1 interacted in the 70-Kilometer altitude range, causing a sudden brightening and widening of the plume.

By the time the first stage concluded its ~15-second partial boost-back maneuver, the second stage had reached sufficient altitude to show off the jellyfish phenomenon as its plume widened considerably once out of the dense atmosphere and flying through vacuum. At the same time, prominent puffs from the first stage – still flying within the second stage’s jellyfish exhaust cloud – indicated activity by its nitrogen thrusters to maneuver from the retrograde (backwards) orientation for the boost-back into the proper posture for atmospheric entry, showing off some impressive ‘smoke rings’ of gaseous and frozen nitrogen.

Three minutes and 11 seconds after launch, the second stage jettisoned the two 13-meter long clamshell-type payload fairing halves as it climbed through 115 Kilometers in altitude where aerodynamic forces could no longer harm the ten Iridium-NEXT satellites – adding two more elements to the high-altitude display.

I told you it would be spectacular #SpaceX #Iridium4 pic.twitter.com/8dPuxNVEMd

Hosting their own nitrogen bottles and thrusters, the two fairing halves were also seen maneuvering to enter a stable orientation for atmospheric entry ahead of a recovery attempt via auto-steering chutes and a four-armed contraption on a sea-going vessel called “Mr Steven” that was in position to catch the fairing.

As the first stage was coming back into the atmosphere, it re-lit a subset of its Merlin engines to hit the brakes and create a more manageable heating environment before the four actuated grid fins were tasked with setting the correct angle of attack during atmospheric flight to deliver the booster to its landing spot.

According to real time calls during the mission, Booster 1036 – closing out a career of two Iridium missions – lit up its center engine to slow down for landing and successfully made a soft splashdown in the ocean. SpaceX did not intend to recover the booster and used its post-separation experiments for data collection while the JRTI Drone Ship sat this mission out in port – marking the first time SpaceX did not attempt to recover one of its flight-proven boosters.

Within a few minutes, the show was over – the second stage had headed downrange as it continued firing to reach orbit, the first stage had found its watery grave in the Pacific and the payload fairing vanished from view – leaving only the exhaust trails lingering in the SoCal skies, dissipating into noctilucent clouds after a short while.

The view of @SpaceX from @Disneyland in Anaheim. Amazing. Feels like a dream @elonmusk #spacex pic.twitter.com/w0cfe09szm

What a show @SpaceX what a show! #spacex pic.twitter.com/ca8zgN7I3Z

It’s way too short, but here’s a brief time-lapse of the SpaceX launch looking over downtown Phoenix! Wish I had been more prepared and time-lapsed it from the very beginning! #spacexlaunch #spacex #falcon9