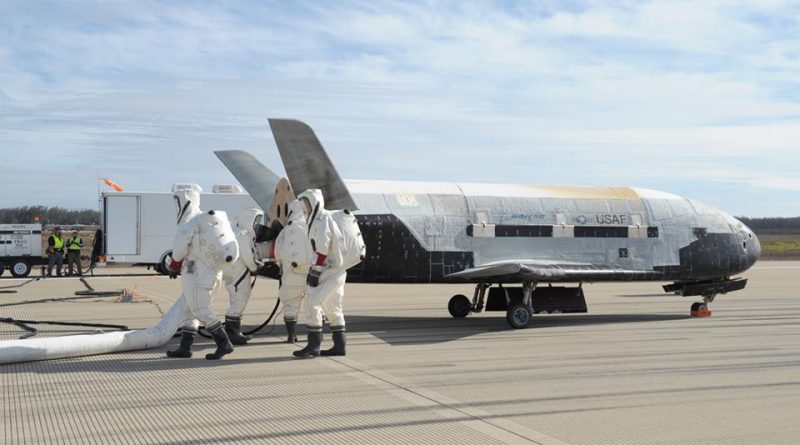 The enigmatic X-37B space plane operated by the U.S. Air Force continues to puzzle program observers as information was put forward by the Pentagon on Tuesday of no plans of an imminent landing of the winged spacecraft, in direct contrast to maneuvers seen by the spacecraft in orbit and air-route closures that suggested a landing attempt at Florida’s Cape Canaveral.

OTV-4, the fourth orbital mission of the X-37B program and the second of this particular vehicle, marked its 636th day in orbit on Tuesday, having launched back on May 20, 2015 atop an Atlas V rocket. Mission specific details such as payloads carried inside the payload bay of the mini Space Shuttle, intended mission duration and operational orbit are kept secret by the Pentagon, though amateur satellite trackers typically keep close watch over the spacecraft’s activity in orbit.


The OTV-4 spacecraft was spotted in a 310-Kilometer orbit within one week of its semi-classified launch and then went up to 350 Kilometers where it spent the majority of its mission to date. Around February 5, the spacecraft maneuvered into an orbit of approximately 307 by 312-Kilometers, a step seen in all three previous X-37B missions in the run-up to the craft’s homecoming between one and four weeks after the maneuver.

Reports from Cape Canaveral indicated heightened activity at the Shuttle Landing Facility and the Eastern Range was booked by an undisclosed customer for the period of February 14 through 17, requiring SpaceX to push its inaugural Falcon 9 launch from KSC’s Launch Complex 39A to the 18th because the rocket’s return toward a powered first stage landing could not be supported by the Eastern Range.

Further indications of activity at Cape Canaveral came in the form of air route closures for Tuesday, February 14 between 13:00 and 21:00 UTC.

These NOTAMS went into effect on Tuesday and were extended to include Wednesday 13 through 23 UTC. Given the flurry of rumors of a possible X-37B homecoming, Social Media was a buzz on Tuesday and observers were out and about with cameras to try and capture a view of the incoming vehicle, but the day’s ~7 a.m. landing opportunity passed without sightings or sonic booms.

The Pentagon issued a very brief statement on Tuesday to shut down rumors of an impending X-37B Landing: “The X-37 is still on-orbit. The program is conducting a regularly scheduled exercise this week.”

Whether the ‘regularly scheduled exercise’ refers to activity by the spacecraft in orbit or crews at the Kennedy Space Center is left open by the relatively vague statement.

It will be up to the satellite tracking community to fully recover OTV-4’s orbit with visual observations. Current tracking data is based on a single observation from Spain and is insufficient for accurate orbital determination and landing opportunity assessment. Visual observation opportunities have ended for Western and Central Europe this week, observers in North America have another four days of morning passes before favorable evening visibility sets in at the end of February. (Latest Tracking Elements)

It remains to be seen whether X-37B will aim for a new program record that currently stands at a mission duration of 674 days set by the OTV-3 mission. The minimum duration of the OTV-4 mission was set at 200 days by a NASA materials science experiment flying inside the Pickup-Truck-sized payload bay of the spacecraft.

The Materials Exposure and Technology Innovation in Space, METIS, is one of two payloads of the OTV-4 mission disclosed to the public before the craft’s launch, the other being an XR-5A Hall-effect thruster developed by Aerojet Rocketdyne for future use by the AEHF military communications satellites. Aerojet Rocketdyne issued a statement back in July 2015 noting the thruster had completed initial on-orbit validation testing aboard the X-37B.

Florida has been identified as the desired landing site for the X-37B before the OTV-4 mission as the vehicle’s main processing base was shifted from Vandenberg Air Force Base in California to KSC starting in late 2014 when the program’s main contractor Boeing acquired former Space Shuttle Orbiter Processing Facility 1. A prominent sign reading “Home of the X-37B” has been placed on OPF-1, indicating the facility is fully equipped to handle pre- and post-flight processing of the winged space planes.