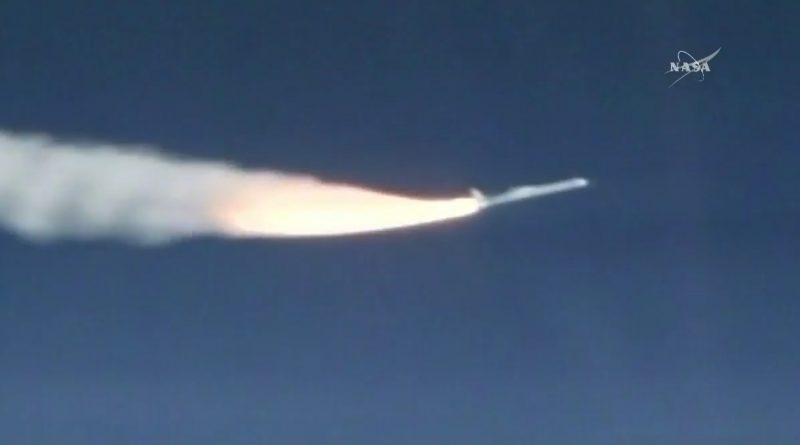 Eight miniature hurricane research satellites soared into orbit on Thursday atop a Pegasus XL rocket dropped from a modified Jumbo Jet over the Atlantic Ocean, beginning a mission to peer into the most dynamic regions of the world’s cyclones to improve storm forecasting.

Strapped to the bottom of an L-1011 carrier aircraft taking off from Cape Canaveral Air Force Station, the winged Pegasus was dropped at 13:37 UTC and fell for five seconds before firing up its powerful first stage to begin a 14-minute climb into orbit using a stack of three solid rocket motors.

Operating its 43rd mission – the first from Cape Canaveral in over a decade – Pegasus raced into clear skies over the Atlantic Ocean with a thrust of 74 metric tons, pitching its nose up to blaze toward space. Pegasus fired its two lower stages before coasting uphill to allow the third stage to lift its payload into a circular orbit over 500 Kilometers in altitude.


Separation of the eight CYGNSS observatories was completed in pairs, embarking on a mission to measure winds over the global oceans and study how tropical cyclones intensify to better warn those in the path of dangerous storms.

The $157 million mission, known as Cyclone Global Navigation Satellite System (CYGNSS), aims to operate a constellation of satellites, capable of taking over two million GPS-powered wind measurements over the tropical oceans every day.

Outfitted with a high-fidelity receiving system, each CYGNSS satellite will listen for long-wave signals from the GPS satellites bounced off the oceans which hold information on the roughness of the sea surface from which computer algorithms can extract wind speeds and direction.

CYGNSS can be thought of as the receive-part of a radar system with the GPS constellation, orbiting over 20,000 Kilometers in altitude, acting as the transmitter. Only fitting receiving antennas and electronics on the spacecraft enabled engineers to build the observatories to the microsatellite standard, not much bigger than a typical suitcase.

Reflected GPS signals have been detected from orbit before but to date had never been used for science. Employing GPS for wind measurements promises to deliver new insights since the signals can penetrate the most dense bands of rain surrounding the core of a storm and obstructing the view for conventional instruments such as microwave radars.

At present, measurements of the powerful eyewall winds of a hurricane can only be made by instrumented aircraft punching through the rain bands and flying through the eyewall. CYGNSS will provide equivalent data from orbit, essentially representing eight storm hunters operating on a 24/7 basis.

Since the start of the millennium, meteorologists have made tremendous progress developing models forecasting the path a tropical storm will take and where it will strike land. However, to objectively assess the danger associated with a particular storm, forecast models of its intensity when reaching land are needed – an area where not much progress was made in the last two decades. CYGNSS aims to change this by gathering fundamental data on storm formation and rapid intensification processes to feed into the development of better models.

Built by the Southwest Research Institute, each CYGNSS observatory weighs in at 28 Kilograms and hosts antennas facing space to capture pristine signals directly from the GPS constellation while antennas pointed to the ground capture up to four simultaneous GPS reflections. Flying in a string of pearls, the eight CYGNSS observatories will collect 32 wind measurements per second, generating a close cross-hatch of sample points on the ground in a latitude band of +/-35 degrees – sampling the entire tropical area every four to six hours.

The measurement conducted by CYGNSS is known as bi-static scatterometry and delivers wind data accurate to two meters per second at a spatial resolution of five Kilometers. Science goals addressed by the CYGNSS mission are to further the current understanding of the coupling between ocean surface properties, atmospheric thermodynamics, radiation and convective processes in the inner core of a tropical cyclone

To achieve the mission’s full objectives, CYGNSS needs to obtain measurements for at least two full hurricane seasons, but the spacecraft’s designers hope the satellites can be operated for five years.

Thursday’s launch marked the return of Pegasus to Cape Canaveral for its first launch from the east coast since 2003. Typically, the L-1011 carrier aircraft launches from Vandenberg Air Force Base or the Kwajalein Atoll in the Pacific to dispatch Pegasus on its missions, but a launch into the hurricane corridor – as required by the CYGNSS mission – was only possible from the Atlantic.

Coming back from Monday’s launch scrub and Wednesday’s spacecraft-related delay, the Pegasus rocket entered a five-hour countdown bright and early on Thursday with all teams reporting to console at 3:16 a.m. local time. A series of tests were performed to ensure Pegasus was ready to support the flight and crews finished ground-based processing steps before the flight crew boarded the aircraft for the hour-long pre-start checklist.

The engines of the L-1011 soared up at T-2 hours in order to switch from ground power supply to onboard power, marking the start of a test of the rocket’s Flight Termination System and avionics while ground personnel finished close outs of the aircraft.

The 1970s-era L-1011 began taxiing to its runway at Cape Canaveral Skid Strip at 12:21 UTC and waited for its precise takeoff time in order to begin a carefully scheduled flight en-route to the drop zone. All three engines soaring, ‘Stargazer’ accelerated on runway 13 and was wheels-up at 12:38 UTC, entering a climb to a target altitude of 39,000 feet.

Launching Pegasus requires a skilled crew aboard the L-1011 aircraft, not only in the cockpit but also in the back where the Launch Panel Operators’ consoles are located and all functions of Pegasus are controlled from once airborne. The Pilot’s are tasked with the delivery of the aircraft to the narrow launch corridor at the right time while the console operators in the back go through the activation steps of the rocket to meet the planned T-0 time.

As a countdown operated with humans in the loop, the T-0 time for Pegasus is a moving target based on the L-1011’s flight path. Pilot Don Walter entered a racetrack pattern around a series of waypoints, designed to deliver L-1011 to the desired launch corridor, measuring 10 nautical miles wide and 40 NM long which provides only four minutes to drop Pegasus. The drop point for Thursday’s mission was located 200 Kilometers east-south-east of Daytona Beach, Florida.

In the minutes prior to release, the launch panel operators aboard the TriStar aircraft commanded Pegasus to internal power, also switching the Flight Termination System to its own, independent onboard power source. Inside one minute to the drop, the fin batteries on the Pegasus were activated and the rocket actuated its aft steering fins to ensure they could provide control while flying through the atmosphere.

With Pegasus configured for launch and a GO given by the team on the ground, the L-1011 Co-Pilot had all authority to drop the 17-meter rocket on the crew’s discretion when passing through the launch corridor.

The 23-metric ton rocket dropped away from the Stargazer aircraft at 13:37 UTC and fell freely for five seconds during which the Flight Termination System was armed ahead of ignition of the first of three solid rocket motors. The first motion indication for Pegasus was marked at 13:37:21.866 UTC.

Soaring to a thrust of 74 metric ton-force, the Orion 50S XL first stage quickly moved Pegasus away from the L-1011 and the 6.7-meter wing of the rocket delivered the lift needed to pitch the nose up and head for space.

The first stage quickly accelerated the rocket beyond Mach 1, having started out at a speed of Mach 0.5 delivered by the L-1011. Passing MaxQ at T+36 seconds, Pegasus continued uphill, operating its aft fins to remain on course toward its orbital target. Stage 1 was responsible for accelerating the rocket to a speed of 2.9 Kilometers per second, firing for 72 seconds and, in the process, consuming 15 metric tons of propellants.

After burnout of the first stage at T+78 seconds, Pegasus held the stage for another 15 seconds before jettisoning the ten-meter rocket motor along with its attached wing that was no longer of use outside the discernible atmosphere. Orion 50, serving as the second stage, fired up immediately after separation, delivering 16 metric-ton force of thrust over a burn of 67 seconds to further boost the vehicle’s speed to 5.8 Kilometers per second.

Just after passing T+2 minutes, Pegasus split open and separated its two payload fairing halves as it had passed through 115 Kilometers in altitude – shedding no longer needed weight as aerodynamic forces were no longer a concern for the eight delicate satellites installed around their cylindrical launch adapters.

Thrust on the second stage tailed off two minutes and 48 seconds into the flight after it had burned through nearly four metric tons of solid propellant. Next was a three-minute and 49-second passive flight phase to allow Pegasus to climb in altitude so that the firing of its third stage could inject the vehicle into a circular orbit 510 Kilometers in altitude, inclined 35 degrees.

The three-meter long second stage fell away from the stack ten seconds prior to ignition on the Orion 38 acting as upper stage, supported by a cold gas reaction control system for attitude control. Soaring to 3,300 Kilogram-force of thrust, the solid rocket motor fired for 67 seconds to accelerate Pegasus to orbital velocity. Active energy management and dynamic re-planning of burn times by the MACH avionics package enabled Pegasus to meet a precise orbital target.

Thrust on the third stage tailed off seven minutes and 56 seconds after liftoff, marking the completion of powered flight and the start of a deliberate payload release sequence. A delay of five minutes ensured residual thrust on the rocket fully dissipated and the reaction control system could orient the vehicle for spacecraft separation.

The eight satellites were installed on their payload adapter so that each could be released into a different direction to ensure there would be no close encounters in the days after orbital insertion. Pairs of satellites were separated into opposite directions starting at T+12 minutes and 56 seconds followed by subsequent pairs after 30-second intervals.

Indications received from the launch vehicle showed all eight observatories made a clean separation, however, their status will not be confirmed until they check in with the mission’s ground station network. Following separation, all satellites were programmed to automatically come online, point their solar arrays to the sun to fully charge the batteries before pointing to Earth for communications with three ground stations in Hawaii, South America and Australia.

All eight satellites should be accounted for by T+3 hours, heading into two months of commissioning activities. First science data will be collected within two weeks of launch to begin the process of data validation while the eight satellites use their solar arrays as orbital drag brakes to enter a formation with all observatories spaced evenly in their orbital plane.