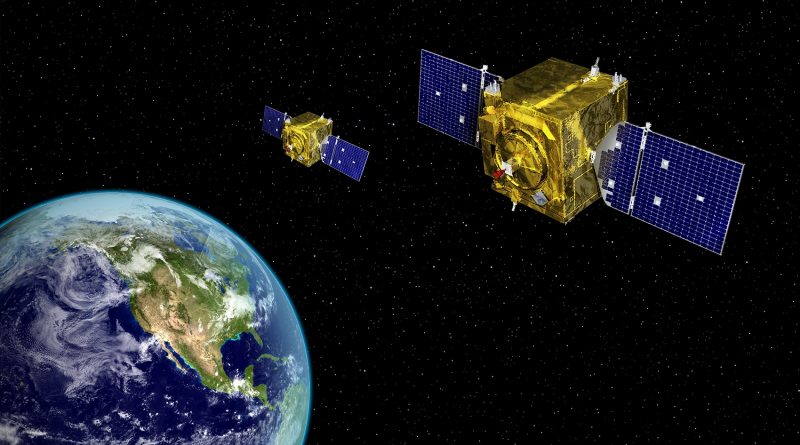 Two satellites patrolling the Geostationary Satellite Belt are ready for launch atop a Delta IV rocket this Friday to join a similar satellite pair launched in 2014 as part of a “neighborhood watch” effort by the United States Air Force.

The Delta IV M+(4,2) rocket is poised for liftoff from Space Launch Complex 37 at Cape Canaveral Air Force Station during a 65-minute window opening at 4:47 UTC on Friday. Riding side by side atop the 62.5-meter tall launcher, the two compact GSSAP satellites are booked for a direct ride into Geostationary Drift Orbit taking close to six hours from launch to the deployment of the two spacecraft.

Although the Air Force acknowledges the identity and purpose of the satellites, only very few details are available on their instrumentation and the launch broadcast will end at the point of payload fairing separation – reminiscent of top secret missions conducted by the National Reconnaissance Office.

Geostationary Orbit is the home of the world’s communication satellites, weather satellites watching over the entire planet, and military spacecraft providing secure communications, missile warning capability and gathering a wealth of intelligence. The security of these assets is of utmost importance to the U.S. after space militarization tests have been made over recent years by different countries launching robotic satellites that could potentially be adapted to tamper with foreign spacecraft.

The GSSAP satellites were developed by the U.S. Air Force and Orbital ATK (formerly Orbital Sciences) and each weighs only around 650 to 700 Kilograms, based on the GEOStar-1 satellite platform that can host small payloads and provide a large delta-v budget for frequent maneuvering and orbit changes.

Deploying an optical imaging payload near GEO satellites allows operators to track their optical signatures, identify their size and movements while radio-intercepting equipment can reveal valuable information on the identity and purpose of foreign satellites. The aim of the program is to identify threats to space-based assets in Geostationary Orbit and protect the infrastructure that provides communications and surveillance to the U.S. government.

The first pair of GSSAP satellites lifted off on a Delta IV in 2014 and reportedly began operating from orbits above and below the GEO Belt.

Due to the small size of the spacecraft, they are hard to detect from the ground, giving amateur observers a hard time when following their movements. However, observations have shown that the first two GSSAP satellites operated in a number of configurations such as one satellite above and one below the GEO Belt, both below GEO, both in close formation or at large distances to one another.

The GSSAP project had been developed in secret, but was declassified in 2014.

According to officials, data from the satellites is used in conjunction with ground-based radars and telescopes to identify potential threats to U.S. satellites which includes screening for orbital conjunctions with other satellites or debris.

The GSSAP satellites also have the capability of performing Rendezvous and Proximity Operations to link up with a resident object in Geostationary Orbit and enable close-up characterization.

The mission marks the 375th launch of a vehicle named Delta in a program dating back to the very beginning of the space age. It will be the 14th launch of this particular Delta IV configuration which will be phased out in the coming years as ULA streamlines its line of rockets with the introduction of the Vulcan launcher.

The weather forecast for the nighttime launch window is looking favorable with 80% odds of acceptable conditions during the window. A trough is expected to move into the southeast U.S. Thursday night, suppressing the Bermuda high pressure ridge into Florida. This creates a shift in wind direction and a potential for isolated showers plus a slight concern for cumulus cloud rule violations.

Countdown operations will get underway in the afternoon hours (local time) on Thursday when the large Delta IV Mobile Service Structure will be rolled back to a safe distance for liftoff, exposing the launch vehicle and clearing the way for final close outs at the launch pad. When clocks come out of an initial countdown hold, Delta’s RIFCA (Redundant Inertial Flight Control Assembly) will be activated for a thorough set of checkouts.

Range Controllers will report to console and start watching over range instrumentation such as radars and communication asset while also maintaining a clear launch hazard area.

Propellant loading procedures will pick up four hours prior to launch with chilldown of transfer lines and propellant tanks before the two stages of the rocket will be filled with supercold Liquid Oxygen and Liquid Hydrogen.

The Common Booster Core stands 40.8 meters tall and is 5.1 meters in diameter with a launch mass of 226.4 metric tons, sporting a single RS-68A main engine – the world’s most powerful cryogenic rocket engine. It delivers a sea level thrust of 3,137 Kilonewtons.

Attached to the large core stage are two GEM-60 Solid Rocket Boosters each weighing 33,789 Kilograms and standing 15.2 meters tall with a 1.52-meter diameter. GEM-60 delivers 827kN of thrust over the initial flight phase to provide the additional energy needed to achieve the target orbit.

Sitting atop the first stage is the smaller version of the Delta Cryogenic Second Stage that is four meters in diameter and 12.2 meters in length powered by a 110kN RL-10B-2 engine which consumes 21,320kg of propellants during multiple firings.

Delta IV will head into a four-minute automated countdown sequence after final checks are complete and all support stations have voiced their final GO for launch. This sequence will prepare the 293-metric ton rocket for liftoff by pressurizing tanks, enabling flight controls and switching to internal power.

Five seconds prior to liftoff, the massive RS-68A engine will soar to life with the typical hydrogen-fueled flames erupting from the base of the rocket before the Solid Rocket Boosters ignite to lift Delta IV off the ground with a thrust of 488,500 Kilogram-force.

Lighting up the night skies over Cape Canaveral, Delta IV will arc to a south-easterly direction on the typical path to a Geostationary Orbit. The ascending vehicle will push through the sound barrier 44 seconds after liftoff and encounter Maximum Dynamic Pressure 13 seconds later. The Orbital ATK-built boosters will burn out one minute and 33 seconds after liftoff with separation commanded seven seconds later.

Delta IV will rely on its first stage until T+3 minutes and 58 seconds when the RS-68A engine will shut down to set up for stage separation seven seconds later. Immediately after the spent first stage is clear, the RL-10B engine will deploy its nozzle extension and pre-start on fuel and oxidizer before igniting at T+4:19.6 to reach a thrust of 11,220 Kilogram-force.

The protective payload fairing is jettisoned four minutes and 30 seconds into the flight, marking the end of public launch coverage due to the semi-classified nature of the GSSAP project.

Despite the pre-arranged News Blackout, the flight profile taken by the Delta IV is very straight forward – comprised of three main engine burns of the second stage, the first into a Low Earth Parking Orbit, the second after a short coast to raise the apogee to near-GEO altitude and then a circularization firing at apogee after a coast phase of around five hours.

Confirmation of mission success for the 33rd Delta IV launch is expected after the GSSAP 3 & 4 satellites separate from the second stage.