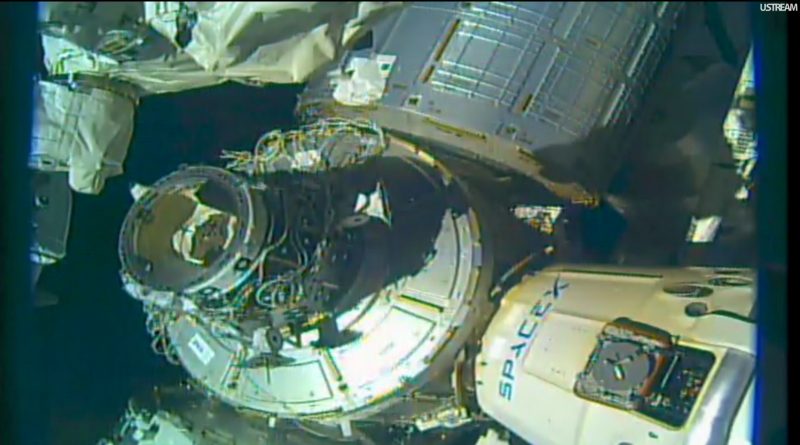 The International Space Station’s robotic duo was in action throughout Wednesday night and on Thursday to pre-position a critical docking adapter to be installed during a spacewalk on Friday to give ISS a new parking spot to be utilized by Commercial Crew vehicles docking at the orbiting outpost.

The installation of the International Docking Adapters is a requirement prior to the start of Commercial Crew to convert the APAS-95 docking system to the International Docking Standard used by both Boeing’s CST-100 Starliner and SpaceX’s Dragon 2 spacecraft. The standard may be used by any government and private entity who wish to do so as all technical information is available freely on the web.

International Docking Adapter 2 (IDA-2) lifted off aboard the Dragon SpX-9 spacecraft on July 18 and had a smooth two-day ride to the Space Station along with 1,790 Kilograms of cargo stowed inside the pressurized logistics carrier.


Due to the loss of the first IDA in the SpX-7 launch failure in June 2015, there was quite some pressure on IDA-2 making it to ISS to establish at least one commercial docking port to avoid a slip in the Commercial Crew timeline. IDA-3 is currently under construction as a replacement for IDA-1 and will head to ISS in late 2017 or early 2018.

IDA-2 is to be installed on Pressurized Mating Adapter 2 on the forward end of the Station that supported 35 Space Shuttle visits including the final flight of the program in 2011 while the other IDA will take a position on PMA-3 which is still to be moved from the Node 3 module to the space-facing port on Node 2.

The installation of IDA-2 is completed in a two-step processes – the first handled by the Station’s robotic arm and Dextre robot extracting the adapter from Dragon’s trunk section and moving it over to PMA-2 for the second part, the actual installation, to be handled by Jeff Williams and Kate Rubins during a spacewalk on Friday.

Robotics picked up just after 22:30 UTC on Wednesday after the crew’s sleep period got underway to avoid robotics impacting crew operations through exercise constraints during the day.

Canadarm2 had picked up the Dextre robot on Tuesday and moved it into the Trunk Section of the Dragon spacecraft where ROBO controllers aligned Dextre’s grapple fixture with the H-Fixture on the IDA for the grapple. After Dextre had obtained a firm grip of the adapter, the disconnection of heater power umbilicals was commanded followed by the opening of launch locks, documented by cameras inside Dragon’s trunk and on Canadarm2.

Initial motion was seen as Dextre and Canadarm2 began to slowly pull IDA-2 from Dragon’s trunk, but movement stopped after only a few centimeters of progress. ROBO controllers faced some trouble when a tethered latch bolt became snagged on an IDA hand rail. When the bolt disengaged, its tether got caught on Handrail 1505 creating a potentially harmful situation for the IDA when being moved.

ROBO teams very carefully worked out arm motions to wiggle the IDA very deliberately and free up the stuck tether, a process that added around three and a half hours to the extraction of the adapter. Once the tether was free, the speed of Dextre and arm motion increased visibly and IDA-2 was removed from the trunk within a period of minutes.

As soon as IDA-2 was clear, it was re-oriented and Canadarm2 started a large maneuver to move outboard in order to get clear of Dragon’s solar array and then swing around to the forward direction with cameras in use to monitor the clearance between the arm and the solar array.

The maneuver was completed as planned and a video survey was completed of the underside of the IDA as well as the PMA to ensure all latches and seals were in the expected condition.

Once directly in front of the PMA, IDA-2 was properly aligned at a standoff of around half a meter, marking the end of the planned robotic operation. IDA-2 will remain in this position until Friday morning, shortly before the start of the day’s spacewalk when ROBO controllers will slowly push the adapter in, aiming to put it in contact with PMA-2 at the proper alignment to IDA and APAS latches.

In their Daily Planning Conference, the ISS crew was informed that IDA-2 had reached the correct configuration for the start of Friday’s installation operation.

Picking up where Canadarm2 left off, Williams and Rubins will be tasked with structurally attaching the IDA to PMA-2 followed by the connection of heater and data cables.

The two spacewalkers have prepared their space suits over the past three weeks and they have their final procedure reviews and tagup with specialists on the ground later on Thursday to gear up for Friday’s excursion. Per the current plan, the EV crew members are expected out the hatch of the Quest airlock at 12:05 UTC.