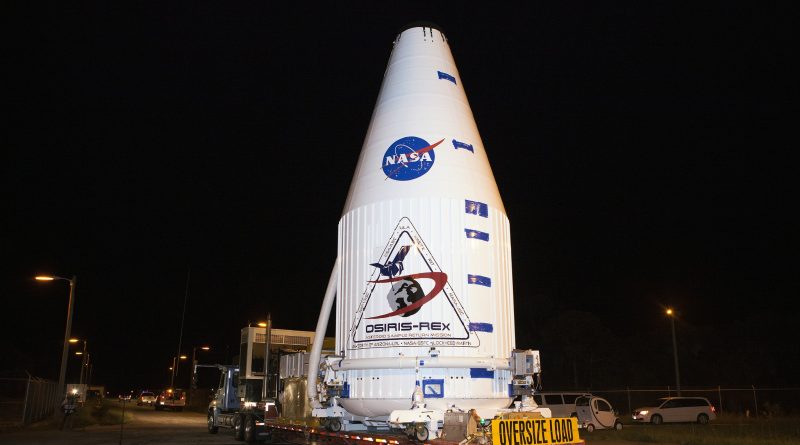 A SpaceX Falcon 9 encountered a catastrophic failure on its pad at Space Launch Complex 40 Thursday morning during what was expected to be a routine Static Fire Test ahead of a Saturday liftoff.

At 9:07 a.m. local time, a major problem emerged near Falcon 9’s second stage oxidizer tank that was actively being filled at the time. A powerful blast rocked the launch complex and its surroundings when Falcon 9 collapsed onto its pad in a blaze of fire. Multiple secondary blasts sent debris flying and a powerful fire raged at the SpaceX launch pad for several minutes.


Standing just 1.8 Kilometers from SLC-40, the Atlas V rocket with OSIRIS-REx under its payload fairing was protected inside the Vertical Integration Facility and initial checks on the rocket and spacecraft revealed no damage.

Space Launch Complex 41 was cleared for Thursday’s SpaceX test per the standard procedure of evacuating the blast danger area when hazardous operations are underway at any of the CCAFS launch complexes.

NASA and United Launch Alliance verified the Atlas V launch vehicle, OSIRIS-REx spacecraft and launch pad infrastructure remained healthy after Thursday’s events. However, information emerged from Cape sources on Friday that the Falcon 9 mishap did cause damage to utilities shared by the launch pad operators such as commodity lines carrying water and different gases.

The schedule for next week’s launch flow has plenty of built-in margin including the Labor Day weekend and United Launch Alliance expects to keep the planned launch date, ironing out any issues in the coming days.

Atlas V and OSIRIS-REx completed the Integrated Systems Test earlier this week – a last simulation of the launch countdown and climb to space as an exercise of the combined launch vehicle and payload system. The next time OSIRIS-REx will be powered up will be on launch day to enter its real countdown sequence.

Prior to the Falcon 9 mishap, NASA, University of Arizona and ULA Mission Managers convened for the Flight Readiness Review to discuss the status of launch preparations from a launcher, payload and support systems point of view. No major red flags were found and a GO was given to proceed with the planned Thursday liftoff.

On tap for Friday was the Mission Dress Rehearsal serving as an exercise for the combined Atlas V & NASA launch team to move through a practice countdown.

The Launch Readiness Review will be conducted on September 6 as a final look at the status of all launch vehicle, payload and ground systems with special focus on any open items that needed closing after the SpaceX incident. If the all-clear is given by Mission Managers, Atlas V will ride its Mobile Launch Platform from the VIF to the SLC-41 launch pad on Wednesday to head into preparations for a seven-hour launch countdown to set up a Thursday evening liftoff.

OSIRIS-REx has a launch period of 34 days with a two-hour window each day. Thursday’s window opens at 23:05 UTC (7:05 p.m. local) and ULA worked out trajectory solutions for possible launch attempts every five minutes for the two-hour window duration.

Atlas V – flying in the 411 configuration with a single Solid Rocket Booster – will carry the 2,110-Kilogram spacecraft to its escape trajectory in 55 minutes, placing OSIRIS-REx in an orbit around the sun for an Earth flyby one year after launch to receive a boost out to asteroid Bennu.