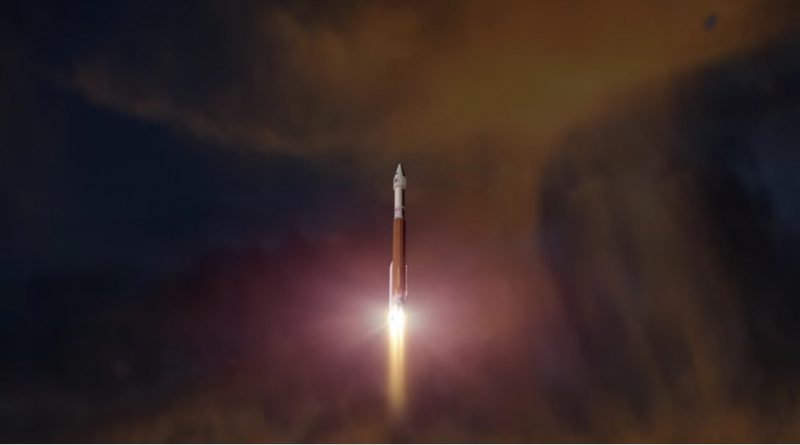 The configuration used will be the 411 comprised of the Common Core Booster powered by a Russian-built RD-180 engine with the trusted RL-10A-powered Centaur sitting on top. Attached to the first stage is a single Solid Rocket Booster, increasing the rocket’s throw capability to match the performance needed by OSIRIS-REx to reach asteroid Bennu. The spacecraft will be shrouded in a four-meter diameter payload fairing.

The Atlas V 411 is one of the more odd-looking versions of the workhorse launcher with only one Solid Rocket Booster that creates an imbalanced appearance after liftoff because of the off-axial thrust moment delivered by the lone SRB. This requires compensation by the RD-180 which gimbals its two nozzles to re-direct its thrust and allow Atlas V 411 to rise vertically.

The Pre-Launch Mission Phase for OSIRIS-REx begins one day prior to launch and lasts until the spacecraft is switched to internal power shortly before liftoff. By this point, all integrated testing will be complete and Atlas V will move to its launch pad at Space Launch Complex 41 at Cape Canaveral Air Force Station.

The Atlas V 411 rocket stands over 58 meters tall, has a core stage diameter of 3.81 meters and a launch mass of approximately 381 metric tons.


This particular version – because of its narrow performance window between the 401 without boosters and the 421 with two – has only flown three times before: in 2006 with the commercial Astra 1KR communications satellite and in 08/11 with the classified NROL-28 and 34 payloads.

OSIRIS-REx has a 34-day launch period with a two-hour daily window – giving the mission plenty of time to get off the ground even in case of periods of bad weather or technical issues.

Following the activation of the launcher, teams begin a series of checkouts of the electrical system of the rocket. Meanwhile, at the launch pad, technicians complete final hands-on work to set up for tanking which picks up after a countdown hold at T-2 hours.

The complex procedure to load the two stages of the rocket with cryogenics begins with the chilldown of ground support equipment and transfer lines and tanks chilldown on the Liquid Oxygen side.

Propellant loading starts in slow fill mode until the initial portion of the tank is filled. Then, fueling transitions to fast fill until the tank reaches 95% for LOX and 97% for Liquid Hydrogen. The final part of propellant loading is completed in Topping mode. Centaur LOX loading takes about 40 minutes as 15,700 liters of –183-degree Celsius oxidizer are filled into the upper stage.

Once Centaur is into propellant loading, the large Liquid Oxygen tank of the Common Core Booster also starts fueling. LOX load on the CCB also moves through the three steps, slow-fill, fast-fill and topping. Only LOX is loaded on launch day, Kerosene loading occurs prior to the countdown.

The final tank to be loaded during the countdown is the Liquid Hydrogen Tank of the upper stage that also goes through the usual steps. Centaur is loaded with a total of 48,100 liters of -253-degree Celsius LH2 fuel; the stage is 12.68 meters tall and 3.05 meters in diameter.

Once clocks reach T-4 Minutes, the countdown enters its final built-in hold. This hold is variable in duration and can be extended in case of technical issues or uncooperative weather. During the hold, the launch team receives a final weather briefing and performs the GO/No GO Poll for Terminal Countdown. During the hold, OSIRIS-REx is transitioned to its flight mode and switches to onboard power with the spacecraft team voicing their final GO to the launch team.

At T-2.7 seconds, the massive two-chamber RD-180 main engine of the Common Core Booster ignites and soars up to its full liftoff thrust of 390,250 Kilogram-force. Engine start-up is closely monitored by flight computers to make sure it reaches operational conditions before the launcher is committed to flight by igniting the booster, raising the vehicle’s thrust to 563-metric tone-force.

Immediately after liftoff, the oddity of the Atlas V 411 will come to light with the booster’s plume very prominent on one side of the vehicle and the RD-180’s exhaust slightly deflected to compensate for the imbalanced thrust moment that is the result of the use of only one booster.

After ascending vertically for 7 seconds, the Atlas V will begin its pitch and roll maneuver to align itself with its pre-determined flight path, departing Florida’s Space Coast. Less than a minute after lifting of, the Atlas V passes Mach 1 followed by Maximum Dynamic Pressure about 69 seconds into the flight.

The single booster will deliver an average thrust of 172 metric-ton force over the course of a 94-second burn, consuming nearly 41 metric tons of propellant. After thrust tails off on the lone booster, Atlas V will continue holding it until T+2 minutes and nine seconds to ensure a safe downrange splashdown in the Atlantic.

With the booster gone, Atlas V will switch from flying a pre-programmed attitude profile to the Zero-Angle of Attack phase, beginning to use navigation data to adjust its flight path in order to meet its cutoff targets.

As the first stage approaches the 4-minute mark into the flight, it will start throttling down its RD-180 engine to maintain a maximum acceleration of 5 Gs.

After a burn of four minutes and three seconds, the first stage will shut down its RD-180 engine that will have done its job. Six seconds after BECO, pyrotechnics will be fired to separate the Common Core Booster that then uses eight small solid rocket motors to move away from the Centaur upper stage. Ten seconds after staging, the RL-10A engine of the Centaur Upper Stage will ignite on its first of two burns with a total vacuum thrust of 10,100 Kilogram-force.

Payload fairing separation occurs a eight seconds after second stage ignition, exposing the OSIRIS-REx spacecraft for the rest of its ride into space as aerodynamic forces can no longer harm the delicate spacecraft structure at an altitude of over 100 Kilometers.

The first burn – eight minutes and four seconds in duration – lifts the stack into a slightly elliptical parking orbit, inclined 28.5 degrees ahead of a coast phase of 21 minutes during which the vehicle will fly passively in its preliminary orbit.

During the coast phase, the stack performs a PTC Roll to evenly distribute sun exposure on the vehicle and Centaur performs regular RCS thermal conditioning firings. The coast sets up the proper insertion conditions for the targeted heliocentric orbit.

When the coast phase is complete, Centaur re-starts its RL-10 engine for a burn of six minutes and 50 seconds. OSIRIS-REx is aiming for a characteristic energy (C3) of 29.3km²/s² and a hyperbolic escape velocity of 5.41 Kilometers per second.

At the conclusion of the burn, Centaur will start a re-orientation to the proper attitude for spacecraft separation after a 15-minute coast phase. OSIRIS-REx is sent on its way between T+55 minutes and T+59 minutes depending on where within the day’s launch window liftoff takes place as a result of slightly different trajectory solutions for each discrete launch opportunity within the window.

Separation of OSIRIS-REx marks the completion of the mission for Atlas V, though Centaur will still be tasked with its standard Collision and Contamination Avoidance Maneuver to ensure no re-contact occurs with OSIRIS-REx.

Spacecraft separation will trigger a time-tagged command sequence aboard the OSIRIS-REx spacecraft.

OSIRIS-REx will quickly power up its transmitters to deliver low data rate telemetry to provide the Mission Team with a confirmation of spacecraft health shortly after entering space. Initial signals from the spacecraft will be captured by the Canberra ground station in Australia around 17 minutes after spacecraft separation.

A critical post-launch event is the acquisition of a stable attitude with body rates reduced to safe levels for the deployment of the solar arrays.

Solar Array deployment occurs a few minutes after spacecraft separation and OSIRIS-REx will be in a pre-programmed safe mode, using Inertial Measurement Unit and Sun Sensor data to point the solar arrays toward the sun for power generation to re-charge the vehicle’s batteries.

With a power-positive spacecraft, the Mission Team will enter a four-week initial commissioning phase. Ranging operations will be performed over the course of the first days of the mission to get a precise trajectory and assess if any immediate corrections will be needed via a propulsive maneuver.

Over the course of the first four weeks of the mission, OSIRIS-REx will undergo detailed checkouts, starting with the spacecraft core systems before power-up of the instruments for electrical checkouts.