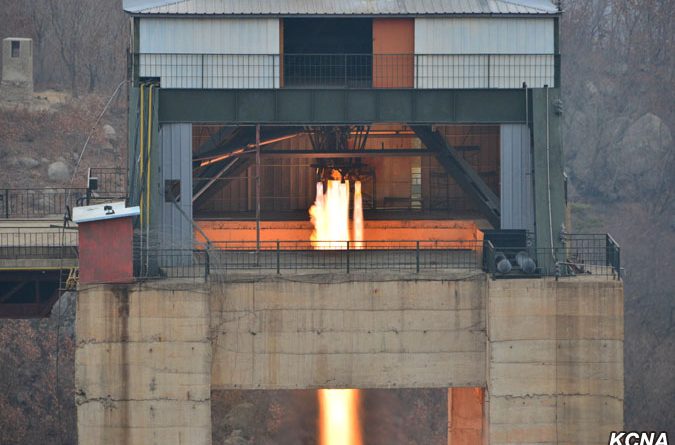 The test firing was carried out at the Sohae Satellite Launching Station and involved a previously unknown engine design with a large main nozzle and vernier jets for steering, a design suitable for an orbital space launch vehicle as well as long-range ballistic missiles.

The test was apparently conducted on Saturday under close supervision by North Korean leader Kim Jong Un who arrived at Sohae in the morning to inspect the new high-thrust engine and learn about its technical capabilities before authorizing the test firing he watched from an observation facility with a direct line of sight to the test stand.

According to KCNA, the new engine was developed by the Academy of National Defence Science. No specifics on the engine’s design or the test firing and its duration were provided by the state-run news agency.


Reported objectives of the test included the verification of stable engine start and stop, the performance of the combustion chamber, turbomachinery and engine controller in an end-to-end test of the integrated engine system.

North Korea carried out a 200-second test firing of an 80-ton-force engine in September 2016, introducing its most powerful rocket engine to date with 2.5 times the thrust of the Nodong engine currently in use on the country’s Unha space launch vehicle that so far delivered two satellites to orbit. Still images released after September’s test showed the engine is a high-pressure, pump-fed design that, judging by the appearance of the engine’s exhaust, consumes a storable propellant mixture.

Photos presented on North Korea’s Central Television on Sunday show the newly tested engine assembly comprised a main engine and what appears to be four vernier jets installed around the main engine nozzle. Based on the thrust structure and size of the central engine, it is likely that the version tested this weekend involved the engine demonstrated last year coupled with a multi-chamber steering engine that would gimbal during flight to control the three-axis orientation of an ascending rocket.

The images show the pump-fed engine employs and open cycle and the appearance of the exhaust was similar to the previously tested engine.

38North.org published analysis of satellite imagery on Friday showing the rail-mounted environmental shelter had been moved up against the engine test stand since February 5, hiding the installation of the newly tested engine from space-based reconnaissance assets.

“A small collection of equipment or shipping crates, not present in imagery from January 9 or February 5, is now visible,” 38North said in its analysis of satellite imagery acquired on March 13 when final preparations for the test will have been in progress.

After witnessing the engine test, Kim “noted that the success made in the current test marked a great event of historic significance as it declared a new birth of the Juche-based rocket industry which has radically turned into a development-and creation-oriented industry both in name and in reality,” KCNA reported on Sunday. “He emphasized that the whole world will soon witness what eventful significance the great victory won today carries.”

According to KCNA, the engine will “help consolidate the scientific and technological foundation to match the world-level satellite delivery capability in the field of outer space development.”

North Korea continues to stress that the country’s orbital launches are of a peaceful nature in pursuit of technological and scientific endeavors. The country first put a satellite into orbit in 2012 and managed to repeat the feat in 2016, both times met with harsh criticism since the launch was seen as a clear violation of a 2006 UN Resolution banning North Korea from carrying out nuclear tests and launches of ballistic missiles. Western countries believe North Korea is using its space program to demonstrate the technologies needed in the development of a nuclear-capable Intercontinental Ballistic Missile.

North Korea to date carried out five nuclear tests and continues to show off its missile capabilities as evidenced in the simultaneous launch of four Scud-based missiles earlier this month. The test originated from Sohae and saw the missiles flying across North Korea ahead of splashing into the Sea of Japan, short of the Japanese territory. Pyongyang also showed the North had mastered solid-fueled missile technology in a test carried out in February, permitting missiles to be kept in a launch-ready configuration for extended periods with minimal time needed for launch preparations.

North Korea’s official news agency said the 80-ton engine first demonstrated last year would build the foundation for the country’s aspirations of becoming a space-faring nation, outlining a five-year plan for the realization of a launch vehicle capable of sending satellites towards Geostationary Orbit.

There has been speculation among South Korean intelligence sources that the new North Korean engine is a close adaptation of a staged combustion design developed in the 1960s by Valentin Glushko’s OKB-456 design bureau in Soviet Russia. However, the RD-250 design calls for a pair of combustion chambers to be fed from a common turbopump assembly mounted in between the two combustors. Although the low-mounted turbopump assembly was clearly seen in North Korea’s engine tests, both tests only featured single-chamber engines.

It is possible that North Korea elected to complete the initial testing stage with only one chamber present or adapted the design to only use one chamber, but in that case the 80 tf thrust claim would not be viable.

Not much is known about the rocket the new engine will be powering, however, satellite imagery from the Sohae launching station has shown that the launch facility’s Service Tower was extended by around 15 meters between the 2012 and 2016 Unha rocket launches, now capable of supporting a 60-meter tall launch vehicle.

Although the technology the North Koreans are demonstrating at the moment was realized by other nations 40 years ago, it could still build the foundation of an orbital launch vehicle capable of placing several hundred Kilograms into Geostationary Orbit.