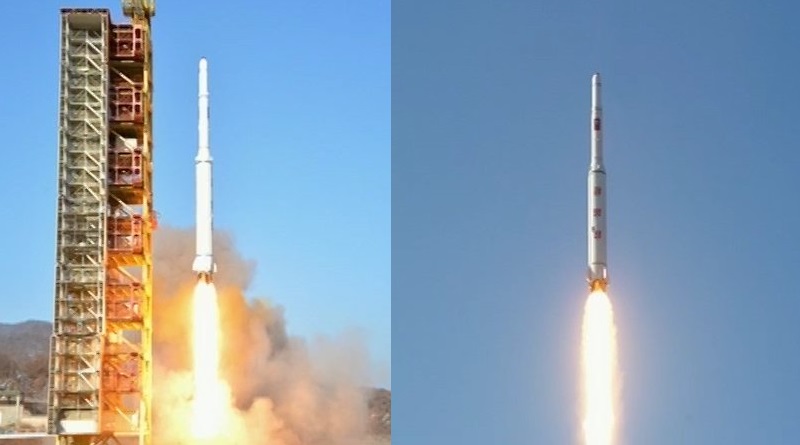 North Korea carried out its controversial space launch Saturday night and successfully lifted an object into orbit as evident in tracking data collected by U.S. Space Surveillance. The Unha space launch vehicle lifted off from the Sohae Satellite Launching Station around 0:30 UTC on Sunday and completed a flight of just under ten minutes, reaching a polar orbit 500 Kilometers in altitude, marking the second time North Korea achieves a successful orbital launch.

North Korea hailed the launch a complete success and reported the Kwangmyongsong-4 Earth Observation Satellite entered an orbit of 494.6 by 500 Kilometers at the desired inclination of 97.4°, separating from the carrier rocket nine minutes and 46 seconds after liftoff.

Tracking Data published by the Joint Space Operations Center show the satellite in an orbit of 466 by 501 Kilometers, inclined 97.5° along with the spent rocket body in a lower orbit of 432 x 502 Kilometers. This confirms North Korea’s second successful satellite launch, however, it may take several days to confirm whether the satellite is alive and transmitting signals to the ground.


Satellite imagery had shown increased activity at the launch base on North Korea’s west coast in January and official documentation was submitted by the government earlier in the week informing of a planned Earth Observation Satellite launch and identifying the hazard areas in the ocean where launch vehicle debris were expected to impact.

The launch had been met with harsh criticism from foreign governments that see it as a long-range missile test and a clear violation of a 2006 UN Resolution banning North Korea from carrying out nuclear tests and launches of ballistic missiles. In another violation of the resolution, North Korea conducted its fourth underground nuclear test just one month ago and the demonstration of a long-range rocket may be seen as the North showing off a delivery device for a miniaturized nuclear device.

North Korea has stressed that this and the country’s previous launches were of a peaceful nature in pursuit of technological and scientific endeavors. Preparations for the country’s fifth orbital launch attempt were accelerated this week and the launch period originally reported to be February 8-25 was shortened to just one week, opening Saturday night.

Four prior orbital launch attempts were carried out by North Korea starting in 1998 with only one achieving orbit. The first launch attempt in 1998 used a Paektusan rocket to lift a 30-Kilogram satellite, making use of an intermediate-range missile outfitted with a third stage to conduct the orbital insertion which ultimately failed. The Unha rocket was inaugurated in 2006 when a test launch failed shortly after liftoff and was followed by a failure in an orbital mission in 2009.

Unha-3, a variation of the vehicle used Saturday night, made its first flight in April 2012 with the Kwangmyongsong-3 satellite, but failed around 90 seconds into its flight when the rocket broke apart. Modifications on the adapted Taepodong-2 Ballistic Missile were made for a re-flight in December 2012 involving a rocket named Unha-3 Unit-2 and a satellite designated Kwangmyongsong-3-2, an identical copy of the first spacecraft, reportedly outfitted with an Earth observation camera and a radio payload.

Kwangmyongsong-3-2 successfully reached and orbit over 500 Kilometers in altitude, but never showed any signs of life and was found to be tumbling. After the successful launch, North Korea spent three years upgrading its Sohae launch site – new buildings were established, the launch tower was modified to accommodate taller rockets and signs of launch vehicle testing showed up in satellite imagery. Initially, a 2015 launch of the Unha rocket was expected, but activity at the launch base did not ramp up until January when preparations for Sunday’s mission began.

No information on the identity of the launch vehicle had been provided beforehand, but navigational warnings place the drop zones of the first stage, payload fairing and second stage in the same locations identified for the April and December 2012 launches – confirming that the launch used an Unha-3-type launch vehicle.

According to information from U.S. Strategic Command, the Unha rocket lifted off at 0:29 UTC on Sunday, 8:59 a.m. local time. Completing a vertical climb-out, the 30-meter tall booster swung to a trajectory taking it due south over the Ocean. With a total launch mass of 90 metric tons, the Unha-3 rocket is capable of lifting 100 Kilograms into Sun Synchronous Orbit.

The ascending rocket was tracked independently by Japan, South Korea, China and the United States. South Korean radars picked up the vehicle at 0:31:02 UTC and continued tracking the rocket and any debris it shed along the way until it was about 390 Kilometers in altitude and 790 Kilometers downrange.

At United States Strategic Command, controllers likely had a high-workload evening as STRATCOM monitored the launch of a Russian Soyuz rocket from the Plesetsk Cosmodrome just eight minutes prior to North Korea’s launch, as is typical for launches from Russia’s military launch site. The ascending Unha rocket was tracked using the Space-Based Infrared System in Geostationary Orbit, capable of detecting the infrared signature of ascending rockets from ground level all the way into orbit. This allows the U.S. military to track the vehicle’s trajectory in real time before relying on ground-based radars to track any objects that entered orbit.

The first stage of the rocket is powered by a cluster of four Nodong motors which are scaled up version of the Soviet Scud design from the Cold War era. Measuring 2.4 meters in diameter and consuming 60 metric tons of Kerosene fuel and Inhibited Red Fuming Nitric Acid, the first stage delivers a total thrust of 1,200 Kilonewtons.

First stage debris fished out of the Yellow Sea after the December 2012 launch came with a surprise as it showed that the Unha vehicle was more advanced than previously believed, employing modern aluminum alloys and showing much thinner tank walls than expected. Also, the first stage was outfitted with four 30kN vernier engines with a +/-36° gimbal, contrary to previous reports that showed the first stage to be stabilized through the use of simpler jet vanes.

According to South Korean press reports, the first stage disintegrated into around 270 fragments before splashing into the ocean. This brought forward the theory that the first stage was intentionally detonated to prevent it from reaching the water intact and being recovered by South Korea which had been the case in 2012 when a large section of tank structure and parts of the engine compartment were recovered from the Yellow Sea.

Taking over powered flight, the second stage was to ignite a pair of Nodong/Scud-class engines to deliver around 150 Kilonewtons of thrust, consuming the same propellant combination as the first stage. The 9.3-meter long, 1.5-meter diameter second stage was expected to fire for around four minutes, burning 15 metric tons of propellant before separating from the third stage.

According to tracking information, the payload fairing impacted at 0:39 UTC in the designated zone to the south-west of Jeju island after separating from the launch vehicle shortly into the second stage burn. The fairing impact zone was located 750 Kilometers due south of the launch site in the East China Sea.

Once separated from the third stage, the Unha second stage was expected to continue on a ballistic path, headed for re-entry and impact in a remote area of the Philippine Sea, away from populated land masses and fishing areas. The Japanese military tracked the launch vehicle as it overflew Okinawa and the second stage impact was detected at 0:45 UTC.

In order to reach a sun-synchronous orbit, the third stage was responsible for an inclination adjustment, taking the launcher further west to increase the inclination from around 90° to over 97°.

A direct flight towards the target inclination would place the second stage impact area over the Philippines, making it necessary for the third stage to perform an out-of-plane maneuver to place the satellite in a Sun Synchronous orbit – a typical requirement for Earth observation craft aiming to obtain ground imagery at favorable sun elevation angles.

The third stage of the Unha rocket reportedly uses Unsymmetrical Dimethylhydrazine and Nitrogen Tetroxide propellants and features a pair of engines to deliver a thrust in excess of one metric-ton-force. The third stage has an estimated length of 3.7 meter and diameter of 1.2 meters, holding around three metric tons of propellant consumed in a burn of over three minutes. Spacecraft separation occurred nine minutes and 46 seconds into the flight.

Details on the Kwangmyongsong-4 satellite are not available, though it can be assumed that its design is similar to KMS-3-2 which carried an Earth observation camera and a 470MHz UHF radio payload to transmit patriotic songs. KMS-3-2 was reported to be three-axis stabilized and its cameras were to be used to collect still imagery as well as videos, to be downlinked via X-Band. The satellite is expected to operate for at least four years and fulfill an Earth Observation task.