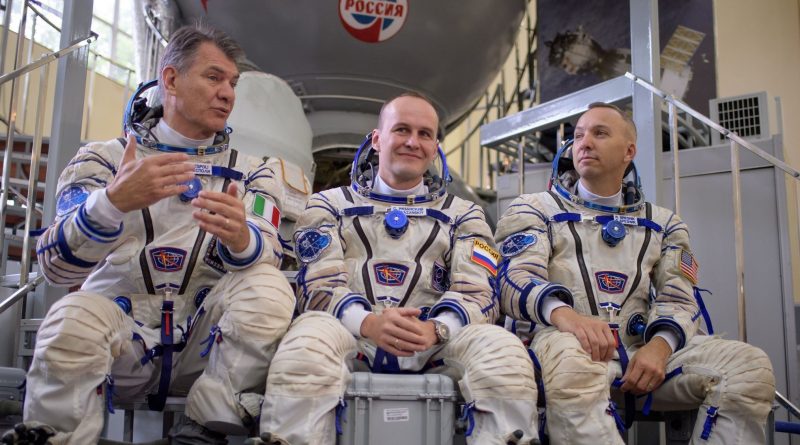 The next three crew members headed to the International Space Station arrived at the Baikonur Cosmodrome in Kazakhstan on Sunday to enter their final 12 days of preparations ahead of an evening blastoff on July 28 for an express trip to their orbital destination aboard the Soyuz MS-05 spacecraft.

The all-veteran crew is comprised of Russian biochemist-turned-cosmonaut Sergey Ryazansky who spent 166 days in space in 2013/14, NASA Astronaut Randy Bresnik who rode on the Shuttle for 11 days in 2009 and ESA Astronaut Paolo Nespoli who flew on the Shuttle and completed a long-duration stint on ISS for a total time spent in space of 174 days. The Soyuz trio is gearing up for a four-and-a-half-month mission to ISS through mid-December after Soyuz mission schedules were shuffled up earlier in the year.

The spacecraft originally intended to fly the Soyuz MS-05 mission (#735) had to fill in for the #734 vehicle that suffered a problem with its thermal control system during final preparations for Soyuz MS-04. As a result, #735 was accelerated in its processing flow and successfully flew Fyodor Yurchikhin and Jack Fischer to ISS on April 20 – just four weeks behind the original schedule.


However, as a knock-on effect of the spacecraft swap, Soyuz MS-05 had to switch to the #736 spacecraft that was not far enough in processing to permit a liftoff per the original schedule, requiring additional time to be ready for flight. This pushed the flight from an original launch date in late May two months to a July 28 liftoff. The current plan calls for the repaired #734 spacecraft to fly the MS-06 mission launching in mid-September and #737 launching in late December as Soyuz MS-07 before returning to the normal launch rhythm in 2018.

Unrelated to the Soyuz re-shuffling, crews were also switched between the four Soyuz missions of 2017 with the original plan calling for Soyuz MS-04 to be crewed by Aleksandr Misurkin, Nikolai Tikhonov and Mark Vande Hei; Soyuz MS-05 with Yurchikhin, Fischer and Nespoli; MS-06 with Aleksandr Skvortsov, Ivan Wagner and Scott Tingle; and MS-07 with Ryazansky, Bresnik and Norishige Kanai.


The decision by Russia to step down to a permanent ISS crew of two and other operational factors caused flight assignments to change considerably with Yurchikhin & Fischer launching as a two-person crew and Ryazansky & Bresnik moving forward by half a year to launch with Nespoli on MS-05. Rookies Tikhonov & Wagner lost their flights due to the crew reduction with MS-06 now expected to fly with Misurkin, Vande Hei and NASA’s Joe Acaba who was called up on short notice for his second long-duration flight to ISS. Skvortsov was bumped from MS-07 which is now expected to be commanded by Anton Shkaplerov with Flight Engineers Scott Tingle and Norishige Kanai.

Ryazansky, Bresnik and Nespoli went through final exams at the Gagarin Cosmonaut Training Center earlier this month along with their backup crew of Misurkin, Vande Hei and Kanai. Flying over to Baikonur on Sunday, all six are looking at a packed schedule for their first days at the launch site including a visit to the MS-05 spacecraft on Monday, fit checks with their Sokol Launch and Entry Suits, final simulations, procedure reviews, tagups with recovery forces and conferences with the crew currently in orbit to get a head start with handover operations. Their schedule also includes daily tilt table sessions to prepare for microgravity.

All three prime crew members can look back at previous space flight experience, two of them have already flown on the Soyuz.

Commander Sergey Ryazansky is a trained biochemist with his earlier career focusing on the effects of the space environment on the human body. He also participated in the first two stages of the Mars 500 isolation experiment that simulated a round trip to Mars by isolating a crew for 15 and 105 days in the preparatory stages and 520 days for the main experiment in 2010/11. His first space flight lasted 166 days as part of ISS Expedition 37/38 and Soyuz MS-05 will be his first mission as commander.

ESA Astronaut Paolo Nespoli served as a pilot in the Italian Army & worked in astronaut support before being selected in 1998 to become an Astronaut for ESA. He flew on Space Shuttle Discovery in 2007 for 15 days, facilitating the delivery of the Harmony module to the Space Station. His first long-duration mission was with ISS Expedition 26/27 in 2010/11, bringing his total to 174 days spent in space. Now 60 years of age, Nespoli aims to boost his total time spent off the planet to over 300 days; his mission as part of Expedition 52/53 is named ‘Vita’ in an ESA tradition of assigning a name for flights of their astronauts.

Randy Bresnik, a Colonel in the U.S. Marine Corps, worked as a test pilot and went on several deployments as part of his military service before being selected by NASA in 2004. He was a Mission Specialist on STS-129 flown by Space Shuttle Atlantis that delivered to ISS a pair of Express Logistics Carriers stocked with external replacement parts for the Station’s life after the Shuttle’s retirement. Expedition 52/53 will be his first long-duration mission and first ride on Russia’s Soyuz.

Teams at Baikonur are working toward the launch of Soyuz MS-05 at 15:41 UTC on July 28 using the trusted Soyuz FG rocket that will be tasked with a nine-minute climb into a 200-Kilometer orbit. From there, Soyuz MS-05 will conduct a series of four orbit-raising maneuvers over the course of its first two laps around Earth to put it into position for a fully automated rendezvous to link up with the Space Station in its 400-Kilometer orbit for an automated docking to the Rassvet Module six hours and 20 minutes after liftoff.