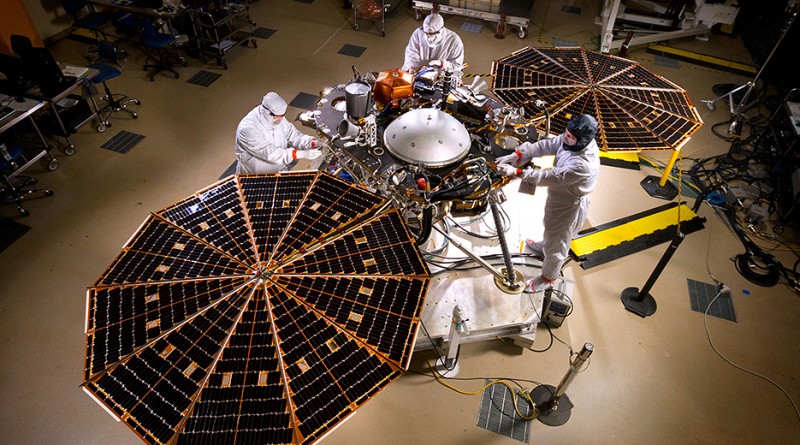 NASA announced on Tuesday that the Mars InSight mission is forced to suspend its plans of a March 2016 launch after the key instrument of the stationary Mars lander suffered a series of leaks that can not be repaired in time to meet the planetary launch window. The ultimate fate of the cost-capped mission will be worked out in the months ahead as options range from fixing the issue and launching the craft during the 2018 window or abandoning the mission altogether.


Part of the Discovery Program, InSight was selected in 2012 – winning against high-profile mission proposals of a boat to set sail on the lakes of Saturn moon Titan and a comet-hopping probe to explore Comet Wirtanen. InSight was to be the first seismic instrument to be deployed to the surface of Mars since the Viking lander’s seismometers that did not deliver the promised results back in the 1970s.

The problems with the SEIS instrument arose in August when leak checks showed that the vacuum maintained around the three sensors had suffered a leak. A high-quality vacuum is required to allow the three seismometers to detect ground movements at sub-micrometer range and work got underway immediately to fix the leak. It was determined that the source of the leak were the seals of the cable feed-throughs on the vacuum enclosure. A defective weld on the vacuum sphere was the prime suspect and a new weld was made to solve the problem and showed good results.

To provide additional time for instrument checkouts in France, it was decided to ship InSight to its Vandenberg launch site and complete the integration of the SEIS instrument in January in order to preserve the opportunity of launching in the planetary launch window stretching from March 4 through the 30th. InSight arrived at Vandenberg Air Force Base on December 16 when the Atlas V 401 rocket had already taken its spot on the launch pad.

On Monday, SEIS was put through a test at a temperature of –45°C to simulate a typical Martian thermal environment and the vacuum enclosure again exhibited a leak. Officials quickly determined that this repeat occurrence of the leak would not permit InSight to launch in its March 2016 window as there is not enough time to resolve the leak and complete the required re-testing and instrument integration on the spacecraft.

“It’s the first time ever that such a sensitive instrument has been built. We were very close to succeeding, but an anomaly has occurred, which requires further investigation. Our teams will find a solution to fix it, but it won’t be solved in time for a launch in 2016,” said Marc Pircher, Director of the CNES Toulouse Space Center.

Launching the InSight mission without its prime instrument is not an option and the mission is now looking at a launch during the 2018 Mars Window – in the best case scenario as a cancellation of the mission in its entirety is also on the table given its cost-cap architecture. InSight has a budget of $675 million for all mission phases including the procurement of the launch vehicle. So far, $525M have been spent and mission managers will now have to look at the cost of storage of the spacecraft and keeping the mission team for an additional two years.

The 350-Kilogram spacecraft will be returned to Lockheed Martin while NASA and its partners work through reviews of financial options to keep the mission alive for a launch in 2018. What plans exist for the Atlas V rocket will be evaluated heading into the new year.

Meanwhile, the European Space Agency and Roscosmos are proceeding towards the launch of the ExoMars Trace Gas Orbiter and Schiaparelli Entry, Descent and Landing Demonstrator Module atop a Russian Proton Rocket in mid-March of 2016, after a last-minute dash to get the spacecraft delivered to the Baikonur launch site in time.