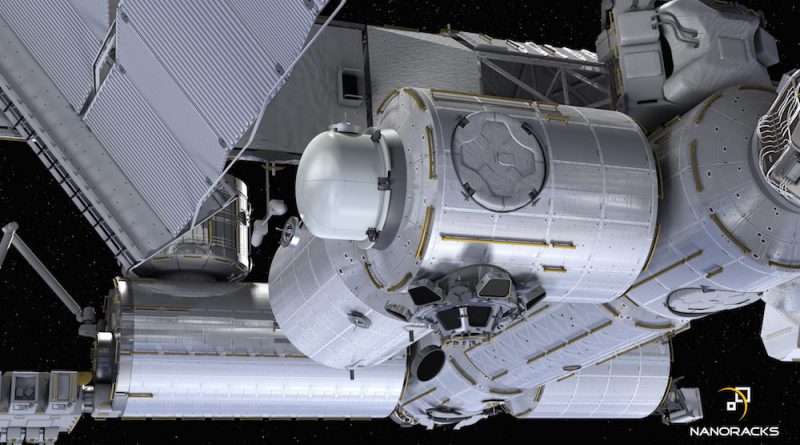 NASA provided preliminary approval for the addition of a commercial airlock module to the International Space Station in 2019 to streamline satellite deployments from the orbiting outpost.

The airlock is being developed by NanoRacks and Boeing to satisfy growing demand for the deployment of external payloads and the launch of CubeSats from ISS. At present, ISS relies on the Japanese Kibo module’s airlock to transfer external payloads and satellites to the outside of the Station with only half of that airlock’s capacity allocated to NASA and commercial users by its operator, the Japanese Aerospace Exploration Agency.

NanoRacks is a company that makes the Station’s internal and external research facilities available to commercial users. The company has flown over 375 payloads to the Space Station in the form of experiments completed inside the ISS, external payload affixed to the ISS structure and small satellites deployed from ISS by the Japanese robotic arm and different deployment mechanisms.


NanoRacks signed a Space Act Agreement with NASA in May 2016 to installed a privately-funded airlock on the Station’s U.S. Segment with a provisional launch date in 2019. On Monday, NASA announced that is has committed to adding the airlock to the Space Station, provided NanoRacks fulfills technical requirement agreed upon under the Space Act Agreement to ensure the module complies with safety regulations in place for ISS.

“We want to utilize the space station to expose the commercial sector to new and novel uses of space, ultimately creating a new economy in low-Earth orbit for scientific research, technology development and human and cargo transportation,” said Sam Scimemi, director, ISS Division at NASA Headquarters. “We hope this new airlock will allow a diverse community to experiment and develop opportunities in space for the commercial sector.”

Under the commercial partnership, NanoRacks is responsible for the overall design and development work of the airlock as well as its integration and testing campaign while Boeing manufactures the Passive Common Berthing Mechanism that connects the airlock to the Tranquility module of the Station. ATA Engineering based in San Diego, California will be tasked with structural and thermal analysis as well as testing and supporting services.

The NanoRacks Airlock Module will ride to the Station inside the trunk section of a SpaceX Dragon Spacecraft followed by installation to the Tranquility module using the Station’s robotic arm. Tranquility is currently the home to another commercial investment, the Bigelow Expandable Activity Module (BEAM) – a trailblazer for developments in the field of expandable space habitats that will likely play a key role in interplanetary mission architectures of the future.

BEAM launched to the Station in April 2016 and was installed and inflated the following month for a two-year demonstration mission to gather data on how the expandable module can weather the harsh environment of space. Originally, BEAM was to remain mostly dormant during its stay, but initial data shows the module is outperforming expectations allowing NASA and Bigelow to enter evaluations on extending BEAM’s stay and broadening its role to allow the crew to use it as a storage locker to unclutter the interior of the Station during cargo-intensive periods.

The addition of the NanoRacks airlock is expected to triple the number of CubeSats that can be deployed from the Space Station. Astronauts aboard ISS will also be able to assemble payloads from components delivered to ISS in cargo bags and deploy them to the exterior of the ISS via the airlock which can handle larger pieces than the Kibo airlock.

“The NanoRacks Airlock Module is the next logical step in the successful line of NanoRacks’ commercial payload facilities,” says Brock Howe, NanoRacks’ Head of Airlock. “This Airlock Module will provide a broad range of capabilities to our payload customers and expand greatly on the commercial utilization of the Station – and I look forward to leading the team at NanoRacks on this next venture.”

The new airlock design also has spinoff potential for use on other orbiting platforms such as a commercial complex based on Bigelow’s expandable module technology that is being actively pursued by the Las Vegas-based company.