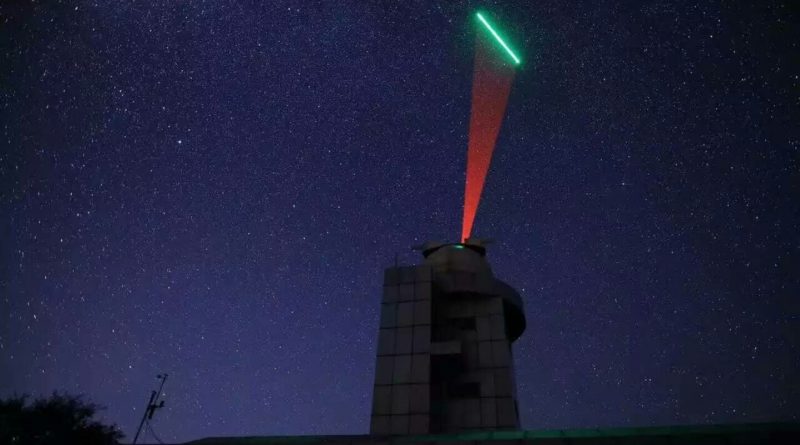 China’s Quantum Science Satellite Mozi (Micius), recently launched atop a Long March 2D rocket, has begun the first tests of quantum communications between itself and stations on the ground – the first test of this kind performed in a space mission.

Mozi lifted off from the Jiuquan Satellite Launch Center on August 15 as the first satellite capable of engaging in quantum communications by creating entangled photon pairs over great distances to test the feasibility of this type of communication technology for operational application.

The 640-Kilogram satellite is set for a test mission of at least two years and is likely to be followed by a global constellation of operational satellites once the principles behind satellite-based quantum communications are proven.

Quantum Information Science is an emerging field driven by fascinating physics and many promising applications such as high-speed quantum computers and ultra-secure quantum communications.


Quantum Key Distribution, the exchange of cryptographic keys between two parties, is completed by means of correlated, or entangled photons – particles of light. The operators of the system share an encryption key encoded in the polarization of a string of entangled photons.

This communication between two parties is inherently secure because any attempt to eavesdrop on or tamper with the system would cause the quantum state of the entangled photons to collapse, immediately making the presence of a third party known to the rightful operators of the system.

Making its first steps in this emerging field, China invested $100 million in the Mozi pathfinder mission and their efforts seem to be paying off. According to official Chinese media, Mozi initiated its first communications session just two days after launch with a successful seven-minute connection established between the spacecraft and a compatible ground station in China.

These are used for tracking – allowing the ground station to follow the satellite’s movement in the sky while the beam from the ground allows the satellite to keep its 20-centimeter telescope pointed to the station for the exchange of entangled photons.

The working principle behind Mozi’s mission revolves around a crystal that generates pairs of entangled photons whose properties remain coupled to one another however far apart they are – as postulated in the theories of quantum mechanics. A high-fidelity optical communications system then delivers the partners of the entangled pair to ground stations in Vienna, Austria and Beijing, China where their polarization properties will be used to generate a secret encryption key.

Though theoretically possible over infinite distances, quantum communication tests on Earth have shown a big issue – light absorption and scattering in the optical medium carrying the photons, either optical fibers or the air-filled atmosphere. To date, these issues limited communications to only a few hundred Kilometers.

A satellite relay system would eliminate these issues since absorption and scattering do not occur in the vacuum of space. Mozi will be the first realization of an end-to-end test of space-to-ground quantum communications over distances of several thousand Kilometers. The spacecraft hosts a photon generator, a key communicator, entanglement emitters and a high-speed coherent laser communicator used to lock onto ground stations.

Mozi has been named after Chinese scientist and philosopher Micius who, more than 2,000 years ago, made the discovery that light travels in straight lines.

The two-year demonstration mission aims to first proof the basics of quantum communications before upgrading to even more ambitious tests such as using the satellite as a repeater – having the ground station in Beijing send a beam of entangled photon of to the satellite and then use the satellite to beam them back down to the Vienna ground station to establish the first long-distance quantum relay. Also, quantum teleportation will be attempted – using information on the properties of photons to recreate a quantum state in a different location.

China’s initial success in the field of quantum communications may fuel efforts of other countries made in this area. Small satellite missions have already shown that entangled photons can be created in space, but their transmission to the ground had not yet been attempted prior to Mozi. (At least to public knowledge as some nations such as the U.S. may be developing quantum communications as part of classified projects.)

While Mozi made its first communication demonstrations, a secondary payload launched on the same rocket completed an equally interesting mission of which only a few details are available.

Lixing-1, a small satellite mission operated by the Institute of Mechanics at the China Academy of Science, was ejected shortly after Mozi had separated from the Long March 2D rocket.

After entering an initial orbit of 485 by 504 Kilometers, LX-1 fired its onboard engine to lower its altitude, entering a remarkably low orbit of 125 by 140 Kilometers to complete a study of the upper layers of the discernible atmosphere.

Typically, an orbit at this altitude is extremely short-lived leading to orbital decay within a day, but LX-1 prevailed for three days to complete its study – either using an aerodynamic design and large mass to prolong its orbital life or countering decay with propulsion.

LX-1 re-entered on August 19, the last orbital data recorded for the satellite was 123 by 132 Kilometers.

No information on instruments carried by the satellite were released, but the purpose of the short-duration mission was likely to measure atmospheric density in the 100 to 150-Kilometer altitude range which will benefit China’s development of hypersonic vehicles.