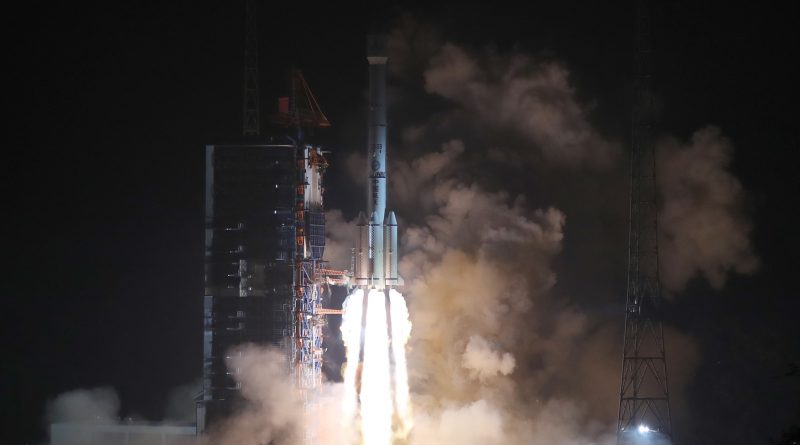 China opened the reign of orbital space launches in 2017 on Thursday with the country’s Long March 3B heavy-lift rocket carrying the TJS-2 experimental communications satellite into a Geostationary Transfer Orbit.

Liftoff from the Xichang Satellite Launch Center in China’s Sichuan province occurred at 15:18 UTC and Long March 3B was expected to fly to the south east across the Chinese mainland before heading out over the Pacific Ocean for the standard half-hour delivery into a highly elliptical Geostationary Transfer Orbit.

Confirmation of launch success was provided around one hour after liftoff.

TJS – Tōngxùn Jishù Shiyàn- refers to an obscure Chinese satellite program that saw its first launch in September 2015 when a Long March 3B lifted an at the time unknown payload into orbit. In the run-up to the launch the mission was suspected to involve an Early Warning Satellite for missile detection, but the official launch announcement issued by state media identified the satellite as a communications technology test satellite.

According to official reports, TJS-1 hosted an experimental payload to test broadband communications in the Ka-Band frequency range (27 to 40GHz) and demonstrate a large, deployable reflector antenna.

The first TJS satellite was built by the China Academy of Space Technology while the second was reportedly constructed by the Shanghai Academy of Spaceflight Technology – their first geostationary communications satellite if it indeed fulfills this function. No detailed technical information is available on the TJS-2 satellite and its mission.


Hitting the ground running in 2017, China is set for another ambitious year in spaceflight after achieving numerous milestones in 2016 with the inauguration of a new space port and two new orbital rockets that will build the foundation of its future line of orbital launch vehicles and setting a new record for the country’s longest crewed space mission to date.

Tied with the U.S. at 22 orbital launches in 2016, China was a leading force in space operations, for the first time surpassing Russia that led the annual ranking for the last 12 years.

Thursday’s launch was originally lined up to become the last mission of 2016 which would have made China the sole leader for the year, but the mission ended up slipping – first to a January 4 target and then to the fifth due to unfavorable weather conditions at the Xichang launch site.

In 2016, China was responsible for a quarter of orbital launches – lifting satellites to all types of orbits, delivering China’s Tiangong-2 space station to orbit, launching the country’s first carbon-dioxide-tracking satellite, sending a Quantum Communications trailblazer into orbit and lifting a crew of two on a month-long stay aboard the miniature space lab.

China will continue full speed ahead in 2017, actively pursuing a number of programs in human space flight, interplanetary science and the exploitation of space for operational applications.

Paving the way to China’s large modular space station will be the Tianzhou-1 cargo resupply demonstration mission that will aim for an automated docking to the Tiangong-2 space lab to validate the technology needed for in-space cargo and propellant transfer. Tianzhou-1 is expected to launch around April atop the second Long March 7 rocket lifting off from Hainan Island.

Toward the end of the year, around the December time frame, China plans to send its most ambitious lunar mission off on a round trip to the surface of the Moon and back to become the first lunar sample return mission in over 40 years.

Chang’e 5 will use China’s most powerful rocket, Long March 5, that will dispatch the lander to the Moon, first entering orbit before making a rocket powered descent to the surface where several samples – including an intact drill core – will be obtained. The craft will then blast itself back to Earth for a blazing re-entry and landing in China’s territory to return its precious sample to Earth.

China is likely to conduct over two dozen space launches in 2017 from the country’s four operational space ports – due to the typical secrecy surrounding China’s space missions it is next to impossible to predict an accurate manifest for 2017. The next Chinese mission is just around the corner, targeting January 9th for the launch of the Kuiazhou-1A rocket with a group of small satellites.

At 16:18 UTC, Long March 3B/E ignited its boosters and core stage that soared to a collective liftoff thrust of 604 metric-ton-force. Thundering off four seconds later, the rocket rose from its pad, lighting up the night skies over the Xichang launch base in the Sichuan province in south-western China. After a vertical ascent of a few seconds, the rocket began to pitch and roll onto its planned ascent path, taking it south-east across China before passing over the Pacific Ocean.

While the second stage was firing, Long March 3B departed the dense atmosphere, making it safe to jettison the protective payload fairing and expose the TJS-2 satellite for the rest of its ride uphill.

The Low Earth Parking orbit, around 190 Kilometers in altitude, was reached after a third stage burn of around four minutes and 45 seconds, marking the start of a coast phase. The coast phase, nearly 11 minutes in duration, was set up to allow the stack to fly to a position where the second burn could be performed around the equator passage so that the high-point of the orbit would be placed over the equator. This second burn lasted for approximately three minutes and 15 seconds and was followed by a variable velocity adjustment that involved the vernier engines of the third stage which continued to fire until the navigation platform sensed that the targeted injection velocity was achieved, thus optimizing the accuracy of the orbital insertion with spacecraft separation occurring approximately 26 minutes after launch.