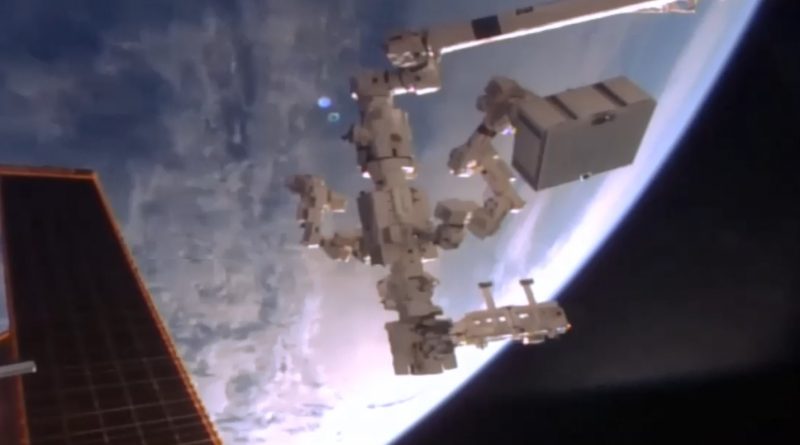 The robots aboard the International Space Station were busy over the past four days starting the most complex robotic maintenance task every carried out on ISS to replace the Station’s aging batteries with new state of the art units that will power the orbiting laboratory for its final decade of operations.

This initial flurry of robotics by Dextre and Canadarm2 laid the groundwork for a spacewalk to be carried out this Friday to finalize the installation of new batteries for one of the Station’s eight power channels before work starts all over again on the next set of batteries ahead of another EVA on January 13th.


Sped-up video of ROBO operations from January 1 through 4 to replace the 3A power channel batteries.

The first batch of new batteries arrived at the Space Station on December 13 aboard the HTV-6 spacecraft, marking the first of four battery flights of the Japanese cargo craft in a sequential operation to replace the Station’s 48 Nickel-Hydrogen batteries with 24 Lithium-Ion battery packs that offer a much greater capacity than the antiquated battery units.

Most of the Station’s 169-Kilogram Ni-H batteries have been in operation ever since being launched with their respective truss segments in the first decade of the century, now having well surpassed what once was a 6.5-year design life.

Per current schedules, groups of new batteries will be flown once a year with the last expected to arrive in February 2020.

The current replacement of a dozen batteries will be the most complex robotic maintenance operation ever performed in the Station’s two-decade history with assistance from the crew provided on two spacewalks to take care of work the Station’s robots can not handle. Work was focused on the Integrated Equipment Assembly (IEA) on the S4 truss of the Station – one of four such locations on the Station’s truss where a dozen batteries and other power switching and conditioning boxes reside to deliver electrical power inboard to the Station modules.

Six new batteries to be put in place on S4 were delivered to ISS via the Exposed Pallet of the HTV spacecraft which was extracted from the spacecraft on December 14 and positioned near the S4 work site on what is known as the Payload/Orbital Replacement Unit Accommodations (POA).

Robotic operations to swap old with new batteries began in earnest on New Year’s eve controlled by robotic specialists at Mission Control as part of a carefully planned multi-step procedure involving the 17-meter long Canadarm-2 and the two-armed Dextre robot, also known as the Station’s handyman.

The new batteries each host three banks of ten cells and comply with the ISS battery form factor of 104 x 94 x 48 centimeters with a total mass of 197 Kilograms. A number of safeguards are in place within the batteries to reflect recommendations made for the Boeing 787 batteries that suffered from thermal runaway issues and are similar in design to the ISS battery ORUs. Overall, the new batteries have an end of life capacity of 48 Amp-hours and are good for at least 60,000 charge-discharge cycles, equivalent to ten years of ISS operations.

The goal of the entire operation, lasting through January 17th, is to replace all 12 Ni-H batteries on S4 with six new Li-Ion Batteries & their adapter plates and have nine of the 12 spent batteries installed on the HTV Exposed Pallet for disposal while three spent Ni-H batteries will be placed atop the Li-Ion adapter plates to be available as spares in the future. While the Station’s robots are equipped to move the batteries, the crew’s hands will be required to install and integrate the adapter plates.

The replacement effort began on the 3A power channel of the Space Station with all six of its batteries being discharged to safe levels before a seamless handover of loads to the 3B channel was completed – taking the 3A channel offline for the week-long replacement activity. First up for Dextre was capturing the first Ni-H battery to be removed from the S4 IEA using the Robotic Offset Tool (ROST) needed for the bolt actuation.

Only the primary (H2) bolts of the batteries’ Flight Releasable Attachment Mechanisms (FRAMs) had to be released by Dextre because the robot worked on the secondary bolts (H1) back in April to get a head start when actually replacing the batteries. With a firm grip on that battery, Dextre was swung around to the Exposed Pallet where the battery was stowed in an empty slot.

Saturday’s activities saw batteries 5 and 6 move from the IEA to the Exposed Pallet and Sunday’s operations were dedicated to moving battery 1 from IEA to the Exposed pallet and Li-Ion Battery B to the IEA where it took up residency in slot 5. On Monday, Battery A was moved into IEA-Slot 1 and the spent Ni-H battery 3 was temporarily stowed. Finally, on Tuesday, ROBO controllers moved Battery C to IEA Slot 3 and tightened the secondary bolts on the new batteries in slots 1 & 5 to finish their installation.

At present, there are three new Li-Ion batteries installed in their new locations on S4 (S/N 006, 008, 0100), three spent Ni-H batteries are on the Exposed Pallet and a fourth is temp-stowed on the SPDM Enhanced ORU Temporary Platform (EOTP) Side 3. Two more Ni-H batteries remain installed on the S4 IEA and will be taken care of by Spacewalkers Shane Kimbrough and Peggy Whitson during Friday’s spacewalk.

Robotic ops went rather smoothly, as could be expected after the preparatory work completed in April to loosen half the bolts holding the batteries in place and breaking torque on the rest. Only one bolt proved out to be stubborn and ROBO controllers had to put in some extra time at some points due to minute alignment problems, especially with the battery going to the EOTP.

Venturing outside on a six-and-a-half-hour EVA, the two crew members will be tasked with retrieving three 39-Kilogram Adapter Plates from the HTV Exposed Pallet and installing them on the three S4 IEA slots that do not hold Li-Ion batteries. In the process, the crew will remove the two Ni-H batteries that still reside on the IEA and install them on the adapter plates where they will remain for the time being.

The Adapter Plates are needed because, in the previous battery setup, two Ni-H batteries were connected in series to a Battery Charge/Discharge Unit (BCDU). With one Li-Ion battery replacing two Ni-H batteries, adapters were fabricated to provide electrical and data connectivity between the BCDU and the battery, allowing the previously used BCDUs to remain in place. During the EVA, the crew will route data and electrical cables between the adapters and the Li-Ion batteries.

With the EVA checked off and channel 3A back on line, the Station’s robotic duo will be up once again with a busy robotics operation lined up for January 8 through 12 to take care of the battery replacement on channel 1A, located on the other side of the S4 IEA.

By January 12, all six new Li-Ion batteries will be in place on the Station’s truss, six spent Ni-H units will be installed on the Exposed Pallet and three in temporary EOTP locations. This will set the stage for the second spacewalk on January 13, carried out by Shane Kimbrough and ESA Astronaut Thomas Pesquet to place the remaining three adapter plates on the 1A side of the IEA and install one of the old Ni-H batteries on Adapter Plate F so that a total of three Ni-H batteries remain on the S4 truss as potential future spares.

Robotics on January 14/15 are dedicated to moving the three Ni-H batteries that are temp-stowed and held by the Dextre Robot over to the Exposed Pallet which will be moved back into the HTV spacecraft on the 17th to wrap up a highly concerted effort involving teams on the ground and in orbit.

A detailed step-by-step overview of Friday’s Spacewalk will be posted on Spaceflight101.com later on Thursday (UTC).