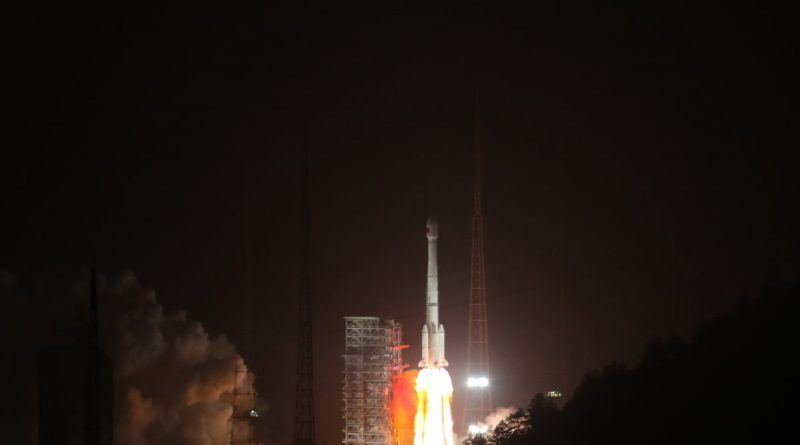 China continued its busy beginning-of-year push on Thursday with the launch of a Long March 3B rocket from the Xichang Satellite Launch Center, carrying the next two Beidou-3 navigation satellites to join the country’s growing global navigation satellite system that is expected to reach operational strength in 2018.

Long March 3B blasted off from its launch pad in China’s Sichuan province at 23:18 UTC, 7:18 a.m. local time on Friday. Official acknowledgement of the launch came after the two satellites reached their target Medium Earth Orbit over 21,500 Kilometers in altitude via their Yuanzheng Upper Stage. Independent tracking data confirms the two Beidou satellites were successfully dispatched to their operational orbit and separated from the upper stage.


January is expected to see up to five launches by the Long March fleet: China’s next mission is right around the corner, targeting launch Saturday morning (UTC) with the next LKW “Land Survey Satellite” and the next three Yaogan-30 electronic intelligence satellites are penciled in for launch on the 29th. Long March 11, an all-solid-fueled launcher, is also set for launch in January, carrying a pair of imaging satellites on its third orbital mission.

Overall, China is looking forward to around 40 space missions this year as the country’s space efforts continue a proliferation from a primarily military-oriented space program with occasional crewed missions and science flights to a broad mix of military and civilian satellites, commercial space endeavors, robotic exploration of the solar system and the operation of a large orbital space station.


One particular focus of 2018 will be China’s Beidou (Compass) Global Navigation Satellite System. At least ten and as many as 18 Beidou satellites could be launching this year according to the China Aerospace Science and Technology Corporation. This would bring the constellation to an initial operational capability before the end of the year as China pushes toward completion of the fully operational system in 2020.

Beidou employs a combination of satellites in Medium Earth Orbit, Geostationary Orbit and inclined Geosynchronous Orbit whereas the U.S. GPS, Europe’s Galileo and Russia’s Glonass only rely on satellites in MEO and India’s Navic only operates from GEO. The Chinese system finds its roots back in 1983 when the first proposals for a navigation system were made, but the program’s first launch did not occur until 2000.

The Beidou project was drawn out as a three-step program, starting out as a purely regional navigation system operating from Geostationary Orbit before broadening the coverage area to include the entire Asia-Pacific Region and then pushing for global, 24/7 coverage.

The first step was realized with three Geostationary Satellites providing service to the Chinese mainland with an accuracy of 20 meters. The Beidou-2 system covering the Asia-Pacific Region was inaugurated in 2009 with five satellites in GEO, five satellites in inclined Geosynchronous Orbit and several planes in Medium Earth Orbit, also offering improved accuracy.

The final push toward global coverage is currently underway via deployment of the Beidou-3 constellation that, in addition to establishing round-the-clock coverage for all locations, will further enhance the system’s accuracy.

Two types of MEO satellites are employed by Beidou-3, made by two different manufacturers (CAS & CAST). To that end, the first three MEO launches under Beidou-3 were classed as in-orbit validation missions while the most recent Beidou-3 mission in November lifted the first operational satellite pair. Thursday’s launch brings the number of Beidou-3 MEO satellites to seven.


The Beidou-3 architecture uses satellites in different orbits to provide compatibility with ground terminals of previous generations that only work with GEO/GSO satellites. Consequently, the Geostationary and Geosynchronous satellites carry two navigation payloads, the Radio Determination Satellite Service retained from Beidou-1 to provide compatibility with heritage receivers and the newer Radio Navigation Satellite Service that operates in a similar way as the GPS, Galileo, Glonass and Navic systems – sending coded signals in the L-Band frequency with ultra high timing precision so that receivers on the ground can process three or four different signals in order to calculate the user’s precise position, elevation and speed.

The Medium Earth Orbit Satellites carry only the Radio Navigation Satellite Service payload allowing them to be smaller in size than the high-altitude satellites and their two payloads. CAS was responsible for the two satellites launched on Thursday, and a TV report indicated their designation will be Beidou-3 M7 and M8; however, these are still subject to official confirmation.


The Medium Earth Orbit satellites are deployed to an orbit of 21,520 by 21,545 Kilometers inclined 55.26 degrees and the finished constellation will feature three orbital planes with nine satellites per plane to guarantee global coverage.

The 56.3-meter tall Long March 3B lifted off at precisely 23:18:04.616 UTC –  around one hour before sunrise at Xichang, climbing vertically for a few seconds before aligning itself with a south-easterly trajectory, taking it over the Yunnan, Guizhou and Guangxi provinces, the Gulf of Tonkin, Hainan Island and out over the Pacific Ocean.