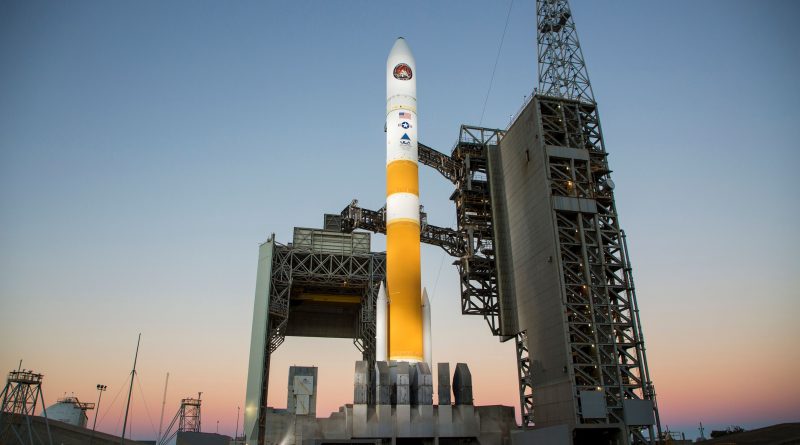 The United Launch Alliance launch team in California played a game of patience on Thursday, taking a Delta IV rocket through a four-hour launch window in an attempt to get the NROL-47 reconnaissance satellite off the pad. However, several technical issues prevented the rocket from taking flight as computers aborted launch attempts at T-85 and T-26 seconds.

Despite having the luxury of a multi-hour launch window, the Launch Team was not able to resolve all the issues put in front of them and called for a launch scrub. The next possible launch attempt for the NROL-47 mission is Friday, but engineering reviews of the issues encountered during Thursday’s repeated attempts will drive the scheduling of the next launch attempt.

Countdown operations had picked up at dawn when teams rolled the Mobile Service Tower to its launch position and revealed the 66-meter tall Delta IV atop its Vandenberg launch pad. Early countdown operations, notably checks of the rocket’s flight control system and radio communications, went without issue and the team proceeded into cryogenic tanking to load Delta IV’s two stages with nearly 230 metric tons of Liquid Hydrogen and Liquid Oxygen.


The countdown entered an unplanned hold at T-3 hours and 45 minutes when the Western Range could not complete its required safe and arm checks due to a faulty relay. This problem was eventually solved and propellant loading operations resumed, though T-0 had already shifted 55 minutes into the day’s window, opening at 21:00 UTC. Another ten-minute delay was called as Delta IV was closer to liftoff, but polling for the revised T-0 time of 22:05 UTC provided a unanimous GO to press into the automated countdown.

Delta IV went through its final tasks under computer control, switching to internal power and pressurizing propellant tanks on both stages before being handed control of the count. Computers triggered an abort at T-85 seconds when the automatic control script found the pad swingarms to still be in their pinned configuration.

Reviews showed the safety pins were properly removed and the indication was a false positive, requiring the event table driving the final countdown steps to be adjusted, essentially forcing the correct indication. Additional problems faced by the launch team were a low temperature indication on the steering actuator of the second stage’s engine and a range-related issue.


After a hold of nearly two hours, the team returned to a launch posture and set another attempt for 0:05 UTC, again going through clean polling and handing authority over to computers for the four-minute auto sequence. The board was reported GREEN at the T-30 second mark, indicating all was proceeding until, just four seconds later, a red line limit was tripped and Delta IV headed into another abort.

The Anomaly Team was convened again to review and troubleshoot the cause of the late abort while the Launch Team remained in operational readiness and coordinated a T-0 of 0:59 UTC with the Western Range to protect an attempt at the end of the window. However, the problem – apparently related to the ground propellant handling system – could not be solved and the team ran out of time as the four-hour window expired.

With a scrub called, the Launch Team was told to set up for a 24-hour recycle and hold off on Delta IV de-tanking for potential tests to be carried out to troubleshoot the latest of the issues. Friday’s launch window is expected to remain the same, stretching from 21 to 1 UTC; weather is showing 90% odds of cooperating.

NROL-47’s identity can be revealed with fair certainty before it even launches due to the unique “backwards” orbit it is targeting as shown by the launch hazard area published for Thursday’s mission. This type of retrograde orbit, inclined >100°, is only used by the radar satellite program of the National Reconnaissance Office which has seen four launches to date.