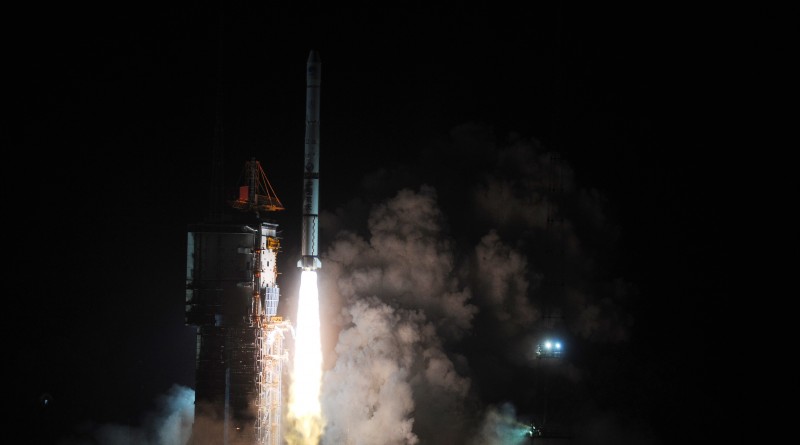 China conducted its third orbital launch of the year on Tuesday, involving a Long March 3A rocket lifting off from the Xichang Satellite Launch Center at 20:11 UTC, carrying a Beidou navigation satellite to orbit.

According to official Chinese media, Tuesday night’s launch – taking place after 4 a.m. local time Wednesday, successfully delivered the satellite to its planned transfer orbit from where it will climb to its operational Geosynchronous Orbit.

Although China began the deployment of the third generation of Beidou satellites in March 2015 as part of Phase III in the country’s Global Navigation Satellite Program, the launch of Phase II satellites is necessary to keep the Beidou-2 constellation in an operational state.

China’s Navigation Satellite System was first envisioned in 1983 and saw its first launch in 2000 when the first generation of Experimental Satellites started deployment to operate from Geostationary Orbit. Comprised of three active satellites, the system offered navigation services limited to the Chinese territory. To expand services across the Asia-Pacific Region, the second phase of the project was initiated. Inaugurated in 2009, Beidou-2 consists of five satellites in Geostationary Orbit, five in inclined Geosynchronous Orbit and four (plus a test satellite) in Medium Earth Orbit. This system covers the entire Chinese territory and a vast stretch of the Asia-Pacific Region.


The final stage in this stepwise process of establishing a space-based navigation architecture is the deployment of a global Navigation System consisting of a number of satellites in different orbits.

When finished, Beidou-3 will consist of 27 birds in Medium Earth Orbit, five heavier satellites in Geostationary Orbit and three in inclined Geosynchronous Orbits to expand services to global coverage while also providing compatibility with heritage Beidou-1 and 2 systems. Beidou-3 will reach its full operational capability by 2020.

Tuesday’s launch involved a Beidou Phase II payload to replenish the currently operating regional navigation system and ensure it remains operational until the global system can take over. Given the typical secrecy of Chinese space launches, almost zero information was available leading up to liftoff. Advance warning of the launch was given in the form of Notices to Airmen, specifying the approximate timing of launch and the expected launch vehicle drop zones.

Due to the secretive nature of this mission, no information was available before liftoff on the type of Long March 3 rocket in use for the flight and no details were released on what was hidden under its payload fairing. The initial belief was that this mission would launch a pair of Medium Earth Satellites, Beidou-M7 & M8, using a Long March 3B rocket. However, the identified areas where launch vehicle components were expected to impact also lined up with a Long March 3A mission carrying an IGSO Satellite headed to an inclined Geosynchronous Orbit.

The Beidou-2I satellites are based on the DFH-3 satellite bus provided by the China Academy of Space Technology (CAST). The DFH-3 bus is hexahedral in shape measuring 2.2 by 1.7 by 2.0 meters in size. Weighing in at over two metric tons, the satellite hosts payloads up to 200 Kilograms hosting a phased array antenna for the transmission of navigation signals, an S- and L-Band dish antenna, a C-Band ranging antenna and a laser retroreflector for precise orbit determination.

Beidou delivers two types of service – a free service that is open for everyone with a compatible terminal and a licensed service for the Chinese government for application in military and other purposes. The free service will provide a position accuracy of 10 meters, speed measurement as accurate as 0.2m/s and a timing accuracy of 10 nanoseconds. The restricted service will have a tracking accuracy of 10 centimeters and will include data transmitted via the signal to deliver information on the status of the system to operational users.

China’s Long March 3A rocket is a three-stage launch vehicle, and currently one of the largest in the Long March Fleet, used to deliver satellites to high-energy orbits such as Geostationary Transfer Orbit. The Long March 3A first flew in 1994 and builds the basis for the CZ-3B and CZ-3C vehicles and their enhanced versions that add boosters and/or stretch the stages of the original CZ-3A to increase payload performance.

Overall, Long March 3A stands 52.5 meters tall with a diameter of 3.35 meters and a launch mass of 241,000 Kilograms consisting of two lower stages that use hypergolic propellants and a cryogenic upper stage. The launcher can deliver payloads of up to 2,600 Kilograms into a Geostationary Transfer Orbit.

CZ-3A’s first stage is fitted with a four-chamber DaFY-6-2 engine cluster providing 2,961 Kilonewtons of thrust. The stage stands 23.27 meters tall and holds 171,800 Kilograms of propellants at liftoff enabling it to burn for 146 seconds. The second stage launches with a propellant load of 49,400 Kilograms measuring 9.94 meters in length and 3.35 meters in diameter, powered by a 742-Kilonewton DaFY-20-1 main engine and a vernier jet for attitude control during a burn of three minutes.

The 12.38-meter long third stage delivers a total thrust of 16,000 Kilogram-force using a pair of YF-75 engines burning Liquid Oxygen and Liquid Hydrogen propellants. Typically, the third stage is fired twice, first to insert the stack into a Low Earth Parking Orbit ahead of an 11-minute coast to set up for insertion into a highly elliptical transfer orbit.

If previous launches can be taken as a reference, the Beidou-2 I6 satellite launched on Tuesday will likely show up in an orbit of 200 by 35,800 Kilometers, inclined 55°.