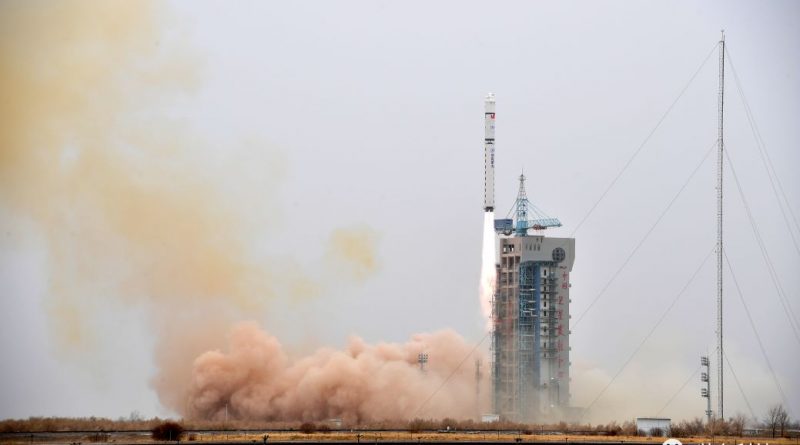 China was back in action on Saturday with the country’s eighth orbital space launch of the year, deploying the fourth satellite in the LKW “Land Survey Constellation.” Returning from Spring Festivities in February, typically accompanied by a lull in space activities, the Chinese continue heading through a packed launch manifest lined up for 2018.

Saturday’s launch involved a Long March 2D rocket lifting off from the Jiuquan Satellite Launch Center at 7:10 UTC to deliver the fourth member of the Ludikancha Weixing system to orbit. Official confirmation of launch success filtered through around half an hour after the 3:10 p.m. local time liftoff, indicating LKW-4 had achieved its planned orbit co-planar with the third constellation member in a system optimized for revisit coverage.

The LKW System has been one of three particular focus points of Chinese space operations in recent months, the other two being the Yaogan-30 constellation and the Beidou-3 navigation satellite system. All three projects saw heightened launch rates and the LKW and Yaogan-30 projects in particular went from inauguration to constellation-strength in a matter of only a few months, indicating their importance in the overall framework of Chinese military and/or civilian space activities.


The Ludikancha Weixing system saw its first launch on December 3rd, 2017 when a Long March 2D deployed the first member of the constellation to an orbit of 488 by 504 Kilometers, inclined 97.46°. Officially, the new satellite was advertised as a high-resolution craft for “remote sensing exploration of land resources.”

However, as has been the case for previous missions by the Chinese, there was the immediate suspicion that the mission, in reality, was of military nature and only flying under the cover of land surveying – especially after Western intelligence had been expecting the Chinese to resume reconnaissance launches under their Yaogan Program around the time LKW-1 took flight.

China has apparently stopped using the Yaogan designation for its optical and radar reconnaissance missions in May 2016 after launching several such craft on a yearly basis for over a decade – Yaogan-30 being the major exception and a cause for confusion among observers given the pace at which the constellation was deployed. Per the current understanding, LKW may be a new designation for the country’s high-resolution optical/radar assets in Low Earth Orbit while Yaogan-30 pursues a different goal of rapid-response data collection.

The second satellite in the LKW constellation launched on December 23 – less than three weeks after the first, indicating the Chinese were in a hurry to get the operational system into active service. LKW-2 entered the same plane as the first satellite at a phasing of 180 degrees, optimized for revisit time with the two in a Sun Synchronous Orbit with a local time of descending node at ~10:30 – a typical morning orbit employed for remote sensing of all kinds.

After the first two LKW birds reached orbit, reports emerged that two more were headed into orbit in fairly close succession due to clues in the form of commemorative envelopes and stamps issued by the Jiuquan Satellite Launch Center.


And indeed, LKW-3 lifted off on January 13 and was tracked in an orbit with a local time of descending node at 13:30 – adding an afternoon orbit to the system and enabling the constellation to collect imagery under different lighting conditions. Intra-day collection by deploying satellites to morning and afternoon orbits is utilized in a number of areas like meteorology, commercial imaging and military intelligence collection.

Given the typical layout of constellations, the expectation was for LKW-4 to enter the same plane as LKW-3 at a 180-degree phasing to optimize revisit capabilities for afternoon imaging. The time of Saturday’s launch coincided with the orbital plane of LKW-3 passing over the Jiuquan launch site, confirming LKW-4 was headed into its orbital plane; orbital data for the newest constellation member will be available later on Saturday.

Based on the appearance of the LKW satellites – seen in CGI launch animation and actual video of the first satellite separating from its rocket – they employ a hexagonal satellite body with three deployable solar panels – a design shared by a number of low-orbiting imaging satellites operated by a number of nations as well as private entities.

The next Chinese launch on the manifest – barring any surprises – will be a Long March 3B rocket lifting the next pair of Beidou-3 navigation satellites, targeting liftoff in the last week of March.