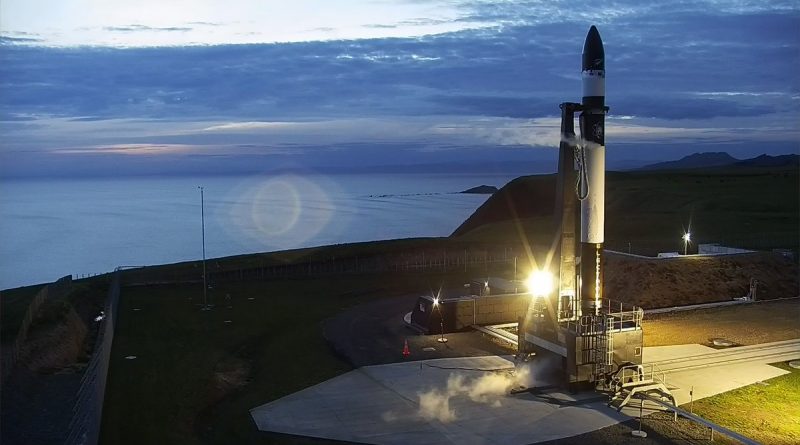 An innovative new rocket relying on electrically-driven engine pumps, 3D-printed components and an all-composite structure stands ready for liftoff from its New Zealand Launch Pad to become the first in a series of Small Satellite Launch Vehicles to reach the commercial market, offering affordable access to space.

Rocket Lab’s Electron is targeting liftoff between May 24 and June 2 with daily windows stretching from 1 through 5 UTC, 1 – 5 p.m. local time at the company’s launch facility at Mahia Peninsula on New Zealand’s North Island. Electron’s inaugural launch will mark a number of firsts including the first launch of an electric pump-fed rocket engine, the first all-composite orbital launch vehicle and the first rocket to launch from a privately-operated launching range.

Although launching from New Zealand, Electron will fly under U.S. Flag and its operation is controlled by the FAA given the parent company is headquartered in Huntington Beach, California with a wholly-owned subsidiary in New Zealand and engineering quarters in Auckland.


Christened ‘It’s a Test,’ the first flight of the 17-meter tall Electron rocket will be highly instrumented and carry an engineering sensor package on the rocket’s second stage but no satellite payload. It is the first of three test flights that will clear the two-stage rocket for operational missions with a number of customers including NASA, Planet and Spire already booked for rides on the rocket.

Rocket Lab says Electron will be available for $4.9 million per flight and capable of placing 150 Kilograms into a Sun Synchronous Orbit. In addition to its affordable prices, Rocket Lab cites its major selling point in providing dedicated rides for small payloads that currently must share a launch with a larger payload that typically sets the mission schedule and target orbit. Setting their own schedule and orbits can increase revenue for satellite operators by getting their satellites where they are needed when they are needed.


“We are all incredibly excited to get to this point,” Peter Beck, founder and CEO of Rocket Lab, said in a statement. “Our talented team has been preparing for years for this opportunity and we want to do our best to get it right. Our number one priority is to gather enough data and experience to prepare for a commercial phase. Only then can we can start delivering on our mission to make space more accessible.”

Rocket Lab was established in 2006 and completed development of the Electron design with venture capital from firms based in Silicon Valley and New Zealand and investments from Lockheed Martin with additional funds coming via initial contract payments by parties signing up for Electron launches. The total development cost for Electron is given as under $100 million by Rocket Lab.

The first flight-ready Electron rocket arrived at Launch Complex 1 on Mahia Peninsula in February to undergo assembly and a multi-week testing campaign beginning with fit checks atop the sea-side launch pad. Last week, the rocket returned to its launch pad, test fired the engine igniters on May 15 and went through a Wet Dress Rehearsal the next day to test the fueling sequence and put Electron through a countdown simulation.

The window for ‘It’s a Test’ opened on Monday, but high winds prevented the rocket from rolling out to the pad, prompting a delay to Tuesday. Countdown clocks had to be put on hold due to unfavorable weather and concerns associated with triboelectrification, pushing the launch to NET Wednesday, pending improvement in weather conditions.

Electron is a two-stage orbital launch vehicle relying purely on carbon composites for its structures and tanks, creating a strong but very lightweight structure. Weighing in at around 12.5 metric tons at liftoff, Electron measures 1.2 meters in diameter and consumes a mixture of Kerosene and Liquid Oxygen – a common propellant combination in rocketry. Its first stage is powered by nine Rutherford engines, generating a launch thrust of 16.5 metric-ton-force that rises to 19,600 Kilogram-force when flying through the rarefied upper atmosphere.


Rutherford is the first electric-pump fed engine to reach the launch pad, also the first Kerosene/Liquid Oxygen engine to use 3D printing for all primary components. Avoiding complex and heavy turbomachinery driven by combustion gases, Rutherford employs a pair of brushless electric motors, each the size of a soda can, to drive the engine’s pumps, spinning at up to 40,000 RPM. Thirteen batteries installed on the rocket’s first stage deliver over 1 Megawatt of power during just over two and a half minutes of first stage operation, relying on advanced Li-Polymer battery technology.

A 22-Kilonewton, vacuum-optimized version of the Rutherford engine powers Electron’s second stage into orbit, using three battery packs to power its pumps, two of which are jettisoned in flight to shed no-longer-needed mass.

Instead of flying with a satellite as payload, the inaugural Electron mission features an instrumentation package to collect data on all flight environments and the behavior of all subsystems of the rocket to deliver detailed insight into potential weak points of the vehicle design in the actual flight environment.

The mission is targeting an orbit of 300 by 500 Kilometers, inclined 83 degrees to Earth’s equator. During ascent, more than 25,000 channels of data will be captured from the various sensors installed on Electron to study the response of each and every component of the vehicle in the different flight environments.

The Mahia Peninsula was chosen as launch base for Electron as it offers safe flight corridors to virtually all relevant orbital inclinations. Overlooking the Pacific Ocean, the site is located on the east coast of New Zealand’s North Island – allowing satellites to be safely placed in a range of orbits at inclinations between 39 and 98 degrees which includes sun-synchronous orbits preferred by Earth observation missions.

The Mahia range is overseen by the Federal Aviation Administration because Rocket Lab is a U.S. company. The FAA launch license for the first three Electron test flights was issued on May 15 and Rocket Lab expects to launch up to 100 vehicles per year once Electron is declared fully operational and the company can scale up its production base with a particular bottleneck identified in 3D printing of engine components.

Getting the world’s first privately operated launch range ready proved almost as complex as getting Electron to the launch pad. Under requirements of the FAA, Rocket Lab had to demonstrate all required tracking and flight termination assets covering the ground track of Electron missions. This includes downrange tracking stations in the Pacific Ocean covering the later stages of flight as well as data paths to the company’s Range Control Center on Mahia and the Launch Control Center in Auckland.

On its initial tests, Electron will fly with an automatic and a manual Flight Termination System that can be commanded either by the vehicle’s computers or operators on the ground to end the flight if it went awry. Operational missions of Electron will likely rely on the autonomous onboard system alone.

Rocket Lab will not provide a live broadcast of the initial test flights of Electron and the exclusion zone around the launch pad has been widened compared to the expected safety zones of operational flights. “Due to the likelihood of postponements, test launch attempts will not be live streamed, but video footage of a launch and other press materials will be made available as quickly as possible following the launch attempt,” Rocket Lab said before the first Electron launch campaign.

Access roads to the launch site will close six hours prior to the day’s launch window and Electron takes its vertical position at the T-4 hour mark in preparation for the initiation of Kerosene loading. Personnel will evacuate the launch complex two and a half hours prior to liftoff after securing all ground facilities and configuring the rocket for launch.

Liquid Oxygen, stored at -183°C, will be pumped into the two stages of the launch vehicle starting at T-2 hours. Final preparatory steps swing in motion at T-10 minutes and include checkouts of the rocket and status checks with all launch controllers to verify Electron is ready for its automatic countdown sequence starting at T-2 minutes when Electron’s onboard computers take control of the count for the final steps such as pressurizing the tanks, switching to battery power and enabling the flight control system.

Electron will come to life at T-2 seconds when electric motors start-up and igniters fire to ignite the engines and monitor all nine powerplants for a brief moment to ensure stable operation at their full thrust level. Rising from its launch pad at a thrust to weight ratio of 1.3, Electron will climb vertically for the first few seconds of the flight before pitching and rolling onto a departure to the south along a 174-degree launch azimuth.

The first stage will burn around 9,250 Kilograms of propellant and shut down its nine engines two minutes and 30 seconds into the flight followed four seconds later by the pneumatic separation of the stages. Ignition of the Rutherford-Vac engine on the second stage occurs two seconds after staging, marking the start of a four-minute and 48-second burn to push the stack into orbit.

Three minutes and seven seconds into the flight, Electron will be sufficiently high to separate its payload fairing halves, shedding no-longer-needed weight. A pair of battery packs will also jettison from the second stage as they are depleted during flight to optimize the vehicle’s performance into orbit.

Shutdown of the second stage is expected seven minutes and 26 seconds into the flight after burning around 2,150 Kilograms of propellant. What follows will be a detailed review of the entire mission to determine whether all systems performed to specification and Electron’s performance lined up with pre-flight simulations.

The first flights of Electron will be expendable, but officials have not ruled out making modifications to the booster to create a re-usable first stage to further drop the cost of launching satellites into orbit. Rocket Lab aims to establish a steady launch rate of two missions per week from Mahia and also eyes launches from Alaska and the Kennedy Space Center later on.