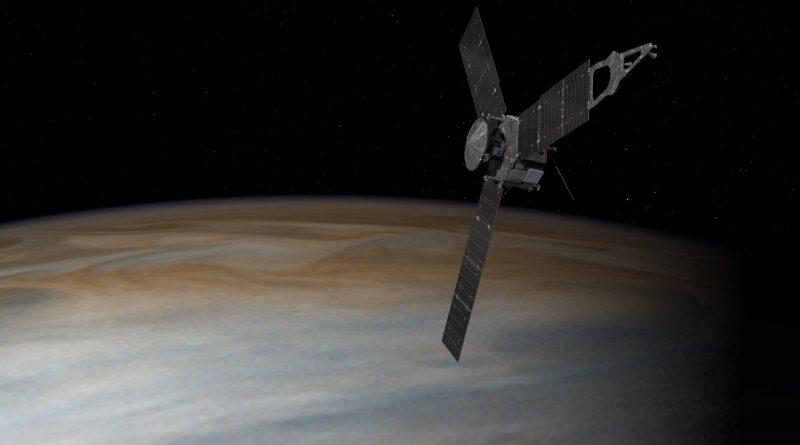 NASA’s Juno spacecraft has received the final instructions from Planet Earth and is now flying on autopilot in preparation for Monday night’s critical Jupiter Orbit Insertion Maneuver to mark the conclusion of a 2.8-billion Kilometer odyssey through the Solar System.

Juno received the final command uplink on Thursday that will take the spacecraft through Jupiter Orbit Insertion (JOI) set to begin at 2:30 UTC on Tuesday, July 5 with signals traveling 48 minutes to reach Earth.

Now in a hands-off mode, the mission team will continue watching over the spacecraft 24 hours a day, but only intervene in case of a failure the spacecraft can not recover from by itself. Given the long communications delay, the spacecraft will be on its own when igniting its main engine to slow down and be captured in orbit around the giant planet.

The final preparatory steps executed over the past several days have all gone by the book – Juno opened up the protective cover of its Leros 1b main engine, warmed and pressurized its propellant tanks and switched off all scientific instruments – only leaving essential spacecraft systems powered up for the JOI maneuver.


In the final days of its approach phase, Juno operated all of its nine instruments to collect some data as it entered the Jovian system – including an approach photo sequence taken by the JunoCam educational instrument.

At a press briefing on Thursday, the mission team shared data from Juno’s Waves instrument, measuring radio and plasma waves to better understand Jupiter’s magnetic field, atmosphere and to collect data on how the solar wind is deflected by Jupiter’s magnetosphere. During cruise, Waves measured the solar wind at different positions in the inner and outer solar system.

On June 24, Waves sensed Jupiter’s presence when crossing the bow shock where the solar wind is slowed by Jupiter’s magnetosphere and deflected around the planet.

“The bow shock is analogous to a sonic boom,” said William Kurth of the University of Iowa in Iowa City, lead co-investigator for the Waves investigation. “The solar wind blows past all the planets at a speed of about a million miles per hour, and where it hits an obstacle, there’s all this turbulence.”

Electrical field data on June 25 confirmed that Juno had entered the Jovian magnetosphere, as evident by an abrupt drop in charged particle density. Particle density will rise again as Juno gets closer to the planet, but the spacecraft will not get a chance to measure them until after entering orbit.

With all preparatory steps complete and satisfactory, engineers transmitted the Ji4040 command file to Juno at 19:15 UTC on Thursday via the Goldstone Deep Space Network Station in California. After receiving the command some three quarters of an hour later, Juno switched itself to autopilot, executing a sequence that had been uplinked earlier to take the craft through the complex JOI maneuver.

For the mission team, anticipation and excitement will rise over the coming days, culminating on Monday when Juno will initiate a 4.5-hour timeline for its JOI operation – picking up at 1:13 UTC Earth Receive Time.

Over a decade of work and $1.1 billion are riding on Monday night’s maneuver.

Juno will have only one shot at the JOI Burn, spinning up to 5 rotations per minute for stabilization and facing its main engine toward the direction of travel. Leros 1b is set for ignition at 2:30 UTC at Jupiter, corresponding to a signal arrival time of 3:18 UTC.

Receiving the ignition command, Leros 1b will open its propellant valves upon which the hypergolic propellant mix self-ignites to enable the engine to generate 65.8 Kilogram-force of thrust.

The engine – flown by dozens of satellites in Earth obit as well as missions to Mars and Mercury – has proven itself during Juno’s Deep Space Maneuvers in 2012 and completed multiple purge firings during Juno’s cruise. The only unknown for Monday’s burn is the response of the vehicle’s electronics to Jupiter’s intense radiation environment.

Shielded by a titanium vault, Juno’s onboard computers are programmed to automatically reboot in case of a radiation-related upset and then re-start the burn to achieve a good capture orbit – a critical feature since no intervention from Earth will be possible as signals of engine ignition will only arrive after the burn is already scheduled to be finished.

The Mission Team will follow the critical burn by tracking the spacecraft’s Doppler Shift to monitor Juno’s change in velocity and by a basic form of communications known as Tones. Juno has a library of tones, each corresponding to different mission events and spacecraft statuses to provide insight into the spacecraft’s current state while neither the high- or medium-gain antenna points to Earth.

The Jupiter Orbit Insertion burn must last at least 20 minutes for Juno to be captured in a stable orbit around Jupiter. To achieve the planned 53.5-day Capture Orbit, Juno’s engine has to fire for 35 minutes, slowing the spacecraft by 541.7 meters per second.

Juno’s navigation system will use data from its accelerometer to track the delta-v (change in velocity) progress and tracking of the engine’s mixture ratio will allow the control system to judge how close engine performance matches up with the prediction. A timer will prevent the burn from running too long, but Juno will primarily rely on the accelerometer to shut the engine down when it senses the expected delta-v has been reached.

Passing Jupiter at just 4,667 Kilometers, Juno will be outbound after its orbit insertion maneuver and point its antennas back to Earth to play back telemetry from the burn. Based on Doppler measurements, the mission team hopes to provide confirmation of JOI success at 3:53 UTC.

While Juno is approaching its out-of-this-world destination, Jupiter has been placed into the field of view of a number of ground-based and orbiting telescopes to deliver data relevant for putting Juno’s measurements into a global picture. The Hubble Space Telescope managed to obtain a spectacular view of Jupiter’s brilliant auroras – the most powerful anywhere in the solar system.

A video of the auroral display seen in May and June was released on Thursday in the run-up to Juno’s arrival. While Jupiter’s northern and southern lights are known to be the most powerful in the solar system, the mechanism behind them is very much up to debate and Juno is hoped to deliver close-up data that will reveal what’s behind the persistent aurora seen on Jupiter.

Juno’s instruments can observe the aurora in ultraviolet, visible and infrared wavelengths while also measuring the inflow of charged particles responsible for creating the brilliant phenomenon when colliding with atmospheric gas molecules.

Unlike auroras on Earth, Jupiter’s auroras never stop, guaranteeing that Juno will catch a glimpse of them during each of its orbits around the giant planet. The auroral display observed in May/June was nearly three times larger than Earth, though Hubble can only observe the part of Jupiter’s poles facing the Earth – Juno will be able to capture the entire auroral display from its polar science orbit.

Juno’s top priorities at Jupiter are to remotely probe the deep layers of Jupiter’s atmosphere where pressure rise to the extreme, analyze its gravitational field to determine whether the planet hides a solid core and measure the amount of water on Jupiter from which scientists will be able to infer details on the planet’s formation which will also lead to more information on the evolution of the Solar System itself.

Hubble is currently tasked with daily observations of Jupiter to deliver data to put Juno’s measurements in a global context as the science team aims to collect as much data as possible to help revealing many secrets held by the giant planet.